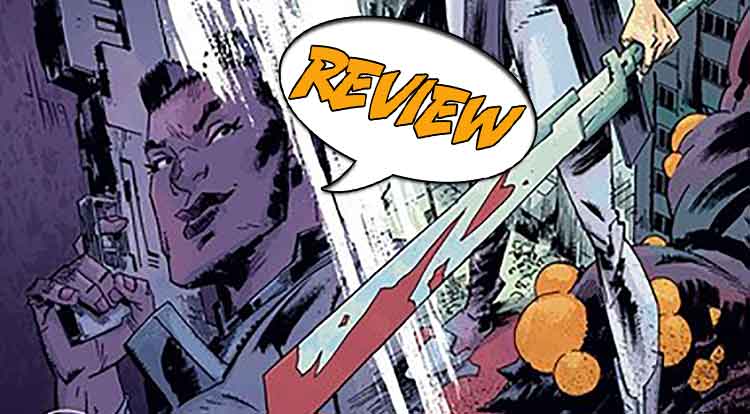 Ember has been thrown into her job as a protector and killer of monsters. But have the Jacks entirely forgotten their humanity? Find out in Big Girls #2 from Image Comics!

Previously in Big Girls: We were introduced to a future world which is mostly in ruins except for an enclave called the Preserve. In this world, men with a certain genetic variant (or medical condition) grow huge and turn into the kaiju-like Jacks, destructive monsters who have laid waste to much of the world. Women with the genetic variant, like Ember, grow huge but remain human. Ember is new to her job patrolling the Preserve, and her first mission involves tracking a man. This man has a gigantic son who has not yet turned into a monster. Ember’s boss, Tannik, kills the toddler outright. Ember barely has time to process this before she gets sent back out to deal with four more Jacks – and she’s the only Big Girl in the area!

LIFE IN THE BIG CITY

Big Girls #2 opens with Ember fighting the Jacks and recalling the advice of Apex, her trainer. She has already lost her gun and is too close to the monsters, close enough to be grabbed. But two of her cohorts, Devon and Apex herself, come on the scene and kill it. The battle rages on, with Apex criticizing Ember or at least critiquing her and calling her “Cowgirl.” We learn that Ember is not from the Preserve; she grew up outside somewhere.

I like that we see some of the aftermath of the fight. The bodies of the Jacks lie where they fell, and the clean up is a big, slow job. There are protesters. People live in this area outside the Preserve, and we see more of the conflict of this world as Tannik orders his men to burn the entire area, despite the fact that people’s homes are there. He’s also looking for any word from anyone willing to talk about who killed his men in the watchtowers and is willing to pay for information; their deaths allowed the Jacks to get this close.

Ember, in her off hours, is still under medical study. She’s amenable to this, but not really happy, and she takes the opportunity to ask about their study of the Jacks. How human are they, she wonders, and this is not at all unreasonable considering that the little boy who was killed last issue was entirely a little boy. She’s also certain that the Jacks she was fighting were working with each other.

Martin, the father of the toddler, is outside the Preserve with Gulliver, the woman involved in breeding giant children. Gulliver has a lot of resentment toward the Preserve. Martin is starting to wonder why he came out here. They run into a mentally ill man who doesn’t want to let them into his territory; Gulliver gives him a platinum coin as a gift for passage – a coin that is actually explosives, which she detonates.

She may be more ruthless than we expected, but she has brought Martin here for a reason. She shows him a woman named Angie. Angie’s son is a Jack, but she meets with him every morning and talks to him and treats him as her son and we get the confirmation Amber is only beginning to wonder about – that the Jacks may well have some understanding and memory of their human selves.

Big Girls #2 has plenty of drama. For all their size, the Jacks are quick. We finally get a good look at them, and aside from their basic bipedal shape, they do not bear much resemblance to humans. They seem to be covered in growths or tumors and to have horrifying toothy mouths. I appreciate that as they move through the remains of the former city, we see their destruction as almost incidental. They’re so large they don’t care about what they move through in order to get to their goal.

The character work is interesting. The lines are angular, from Ember’s pointy chin to the square jaws of both Tannik and Apex. From certain angles, their faces can seem very flat. But as big as the action gets, subtle emotions are captured too. The moments that Angie has with her son are surprisingly sweet.

While giant monsters are a theme in Big Girls #2, they are hardly the whole story. This is a world full of divisions and people take complicated sides.

Are the Big Girls the protectors of humanity or a symptom of a broader disease?