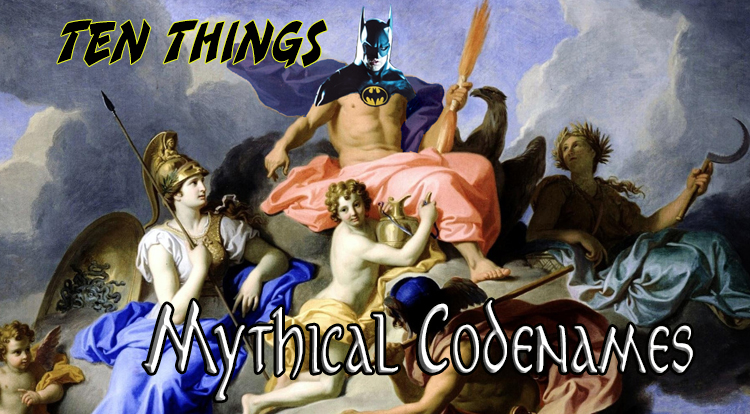 It’s been said that supers are modern myths. Sometimes, the influence is obvious. Welcome to Ten Things: Ten Mythical Codenames!

Whooshman-Bicarbonate Films, in conjunction with An Amateur Comics Historian and the world’s finest team of Zeus-Man and Captain Perseus, Presents: The sixth major Hyperion to appear in Marvel Comics (after the villain created by the Grandmaster, the hero from Earth-712 who inspired that villain, the evil King Hyperion of another world, Supreme Power’s grimdark jerk and the member of Hickman’s Avengers team), this latest take on the Man of Steel is a member of the Squadron Supreme of America under the command of SHIELD agent Phil Coulson. In reality, he is a simulacrum created by Mephisto for as-yet-unrevealed reasons, sharing the name of the mythological Titan, the son of Gaia and Uranus. Petty criminal David Clinton tired of being a loser, designing a terrible costume and a series of time-themed weapons that he used to pester The Atom, hero of Ivy Town. He eventually achieved actual time-travel capacity and even spawned a heroic legacy character in Walker Gabriel, but no matter the time or place, David Clinton just continues to lose. His nom de guerre is the personification of time itself, also sometimes spelled Khronos or Chronus, which leads to confusion with Cronus, who was one of Hyperion’s Titan comrades. One of the prominent members of The Eternals, Ikaris is thousands of years old and was present for the sinking of Atlantis. In modern times, he has traveled incognito among humanity as Ike Harris, in which guise he discovered a Deviant plot that forced his people to go public with their existence. Powered by cosmic energy, Ikaris has complete control of every molecule of his body, making him MUCH more powerful than his namesake, Icarus, a mortal man who flew too close to the sun wearing wings made of wax.

Hubris will getcha, if you’re not careful. On Earth-9602, the gestalt reality known as the Amalgam Universe, Jocasta was the bodyguard of Will Magnus, a madman who wanted to destroy all metamutants, hence her resemblance to a prime-universe Sentinel. Though destroyed more than once, Jocasta’s usefulness (and her creator’s strange fixation) led to Magnus rebuilding her more than once. That fixation helps to make her name even more fitting, as Jocasta/Iocaste was the mother and also the wife of Oedipus, and we all know how that tragedy turned out. After discovering a hidden altar to the Egyptian god, Dr. Blake Washington, Jr. was transformed into a superhuman bearing the power of Ra himself. Using the power of the sun, Blake/Ra set out to punch and/or burn down evil everywhere. At least one of him (Sentinels of the Multiverse is chock full of alternate realities, and I haven’t quite unsnarled them all) died heroically in battle. This is fitting for his namesake, who is the falcon-headed creator/giver of life and one of the most important members of the Egyptian pantheon. This one might be a bit of a cheat, as Wonder Woman’s sorcerous foe claims to be the actual enchantress of Greek myth, the daughter of Helios and maybe Hecate. (Accounts differ, with some claiming her mother as the nymph Perse.) She maintains her motif of turning people into animals, as seen in ‘The Odyssey’, while adjusting to modern times and fashions as she sees fit, though the DC Universe gives her very different parentage than the traditional version, at one point claiming that her father was Hyperion. Originally appearing as an occult investigator calling herself The Rose, copyright issues with the ‘Champions’ RPG seem to have led to a new name and costume in her modern appearances. The latest incarnation of an eternally-reincarnating sorceress her true name is unknown, but she has gone by the aliases Julia Rich, Julia Hunter and Rose Hunter in various appearances, and is currently a member of the League of Champions. Her mythological counterpart was a woman so beautiful that she rivaled Aphrodite herself, who then became a goddess herself. Looking remarkably like Rosario Dawson in that picture, Maya Lopez has photographic reflexes, allowing her to perfectly duplicate any physical movement that she observes. Initially sent after Daredevil by The Kingpin, she realized she was being manipulated and became his ally. She later posed as the ninja Ronin, joining the New Avengers under that guise. Though her name is probably taken from her ability to perfectly “echo” movements, it is also the name of a nymph who was cursed by Hera to speak only the last words spoken to her. Her story ends tragically, as do most involving the libido of sky-king Zeus. A native of Iran, Raza Kattuah either discovered or could generate a scimitar of pure flame, that he used in combat. Falling in with The Jihad, a super-team of terrorists out of Qurac, Rustam battles the Suicide Squad and was one of the only survivors of their clash, rebuilding his team more than once to take another shot at revenge against The Squad and leader Rick Flag. He gets his name from a legendary hero (also spelled Rostam) of Persian mythology, a mighty warrior who slew monsters, battled tyrants and, sadly, slew his own son without realizing. Fashion designer Ginger O’Shea was kidnapped and forced to house an ancient elemental spirit, then sent to attack the Super Friends. She and her friends eventually became heroes in their own right as The Elementals, allying with the Super Friends to defeat the man who manipulated them. Her mythological counterpart seems to be nothing more than a tiny lizard, but has strange (and unconfirmable) powers over fire itself. Some descriptions of the legendary salamander sound more like traditional dragons or wyrms, but representations as a flaming birds, satyr-like creatures and even winged dogs have been recorded.

This week’s topic, Ten Mythical Codenames, is all me, but feel free to follow along @MightyKingCobra to suggest your own! There’s also more Ten Things madness on Twitter or check out the full Twitter archive here! As with any set of like items, these aren’t meant to be hard and fast or absolutely complete, if only because Thor’s movies made millions and millions of dollars for Marvel. Either way, the comments section is below for just such an emergency, but, as always: Please, no wagering!