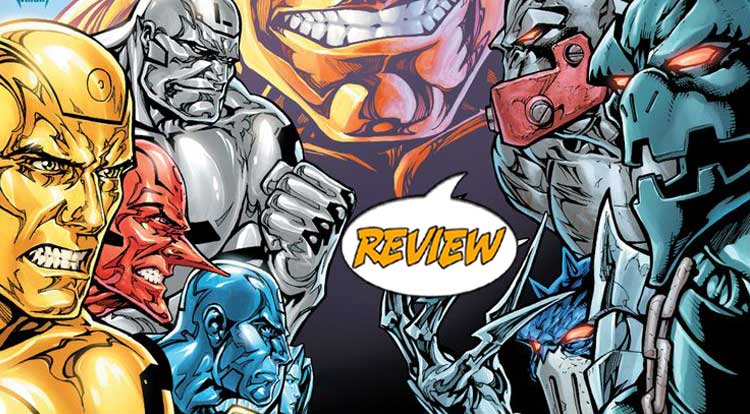 Half their number is trapped in the Dark Multiverse…  Now, the remaining Metal Men have to go in after them in a desperate race against time!  Your Major Spoilers review of Metal Men #10 from DC Comics awaits!

Previously in Metal Men:  As Tina, Gold, and Nth Metal Man get sucked into the Dark Multiverse and taken hostage by a mysterious organization, it’s up to the rest of the Metal Men and Magnus to risk a one-way ticket there to save them!  If the Metal Men don’t know that the Dark Multiverse is a result of their deepest, darkest fears come to life, can they even trust the person who has led them straight to this nightmare realm… Nth Metal Man?

INTO THE DARK MULTIVERSE

We open in the lab of Dr. Jenet Klyburn, who isn’t happy to find half the Metal Men and their itinerant creator in her domain.  Magnus accuses her of stealing his research on Nth Metal Man, but she explains that she’s been looking into the robot because his unique radiation has made Magnus and his Metal Men act out of character.  She explains that the secret of the responsometers is that Magnus forgot to turn them on…

I really hate that moment.  Elsewhere, in the Dark Universe, Nth Metal Man explains his origins to Platinum, explaining that he’s an alternate version of the Doc Magnus robot she made waaaay back in issue #2 of the original Metal Men series decades ago, from a world where he was thrown into space and rebuilt by Thanagarians.  Unfortunately, part of his world involved Dark Metal Men, including Plutonium, who set out to destroy all human life on Earth, and who has now returned with his sights set on ANOTHER Earth: The prime reality.

I’M STILL NOT SURE ABOUT NTH METAL MAN

I have to say, this issue is a long walk for a short drink of water, taking six VERY talky pages to explain that Magnus didn’t fully understand his creations, but at least confirming that the Metal Men are, in fact alive.  Then we get ten plus pages of flashback from Nth Metal Man, which basically condenses what might have been a two-issue story arc into another wordy sequence, leading to the return of Plutonium, which is the only real incident in the whole issue.  On the other hand, I enjoy Shane Davis’ art, especially the ways he illustrates the various shape-shifters in the issue, and his Plutonium is flat-out terrifying.  There are some problems with the coloring for me, with some very garish moments in the Dark Universe, but overall the metallic effects work more often than not, and the last page splash of Doc, Iron and Lead heading into the Dark Multiverse is a strong one.

BOTTOM LINE: THE ART IS OKAY

There are three really problematic story moments for me in this issue, but none is more upsetting than the “you forgot to turn it on”, a bit that was clearly meant to be clever/funny, but just falls terribly flat in context.  Metal Men #10 gets by on the strength of its art, with coloring that causes a few problems but a story that just doesn’t compel me to keep reading or hold together of its own accord, earning 2.5 out of 5 stars overall.  It’s a disappointing issue, but there’s still two more to wrap things up, so I’m still interested in seeing if these creators can pull this story off in the end.

The art is pretty okay, but the story is nonsensical and plodding, making for a disappointing read all around.