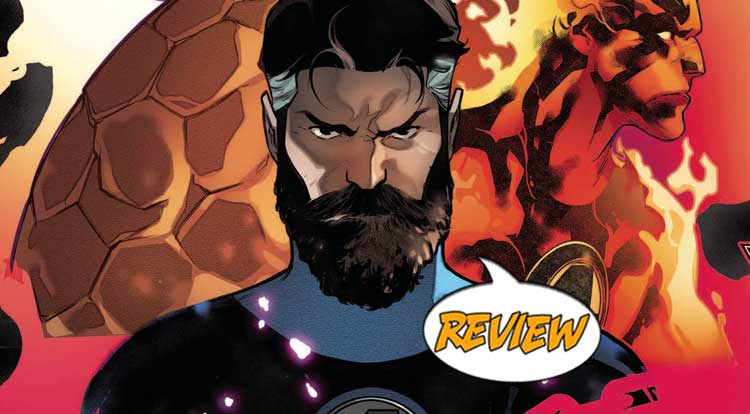 The Fantastic Four have held off interstellar war, but not without consequences.  Your Major Spoilers review of Empyre Fallout: Fantastic Four #1 from Marvel Comics awaits!

Previously in Empyre Fallout: Fantastic Four:  The fate of all future Kree/Skrull Wars is placed in the hands of Reed Richards and his family, the Fantastic Four.  Plus The Profiteer returns, but is she here for revenge… or justice?

And a special appearance by the most ominous cosmic character of them all, The Unseen!

On the Moon, in the mysterious Blue Area, the Fantastic Four and the Avengers have assembled to clear up the remainder of the unfinished business after the conflict with the Cotati.  Of course, no visit to the moon is complete without an appearance of the Unseen, the man once known as Nick Fury, who watches as the heroes assemble to try and figure out what to do with the captured Quoi and his army.  There’s also the unanswered question of where he got his weaponry, a question that gets answered by the mysterious Profiteer, who then tries to claim Jo-Venn and N’Kalla (the Kree and Skrull babies who were key to unraveling the Empyre conflict) as her own, only to have Hulkling, the new emperor of the Kree/Skrull Alliance shut her down, with a little help from the assembled Fantastic Four and Avengers.  Hulkling instead decrees that the children be put in the care of Ben and Alicia Grimm, who happily oblige, while Thor and Franklin Richards deposit the Cotati on a new planet, far from Earth.  As everyone heads back home, the Unseen tries to figure out the origins of the weapons, only to have an old friend return unexpectedly, exclaiming, “There shall be a reckoning.”

The return of Uatu the Watcher was a surprise, and it seems to be setting up Dan Slott’s Reckoning War, a plotline that has been teased for more than a decade throughout various books, but the real success of this issue comes in the quiet moments of down time.  Spider-Man and the Human Torch get to catch up, Thor and Franklin get to discuss the responsibilities that come with power, and nearly everyone gets a breather after the madness that was Empyre.  Hulkling gets some impressive king moments, and The Profiteer is set up with another motive to come back in force.  Izaakse’s art is quite good throughout the issue, though I especially enjoy the moment where the assembled heroes take up arms, a half-page splash that reminds us that, down time or not, these are Earth’s Mightiest Heroes (and I like that, once again, it’s Reed who calls “Avengers Assemble!”)  Add in the big cliffhanger (which is also a really beautiful shot) and you’ve got yourself a winner of a comic.

BOTTOM LINE: A RECKONING IS COMING

In short, I liked Empyre and Empyre Fallout: Fantastic Four #1 is is nice wrap-up for that storyline, providing closure, quiet moments for the characters and a big shocking ending with some really nice art, earning 4 out of 5 stars overall.  I’ve always said that, if the Big Two are going to be locked into their endless series of events, at least those events should be exciting, and this issue fits that bill.

A strong issue that gives us a breather and some quiet time with the characters before setting up the next big thing with a shocking return... I like it.