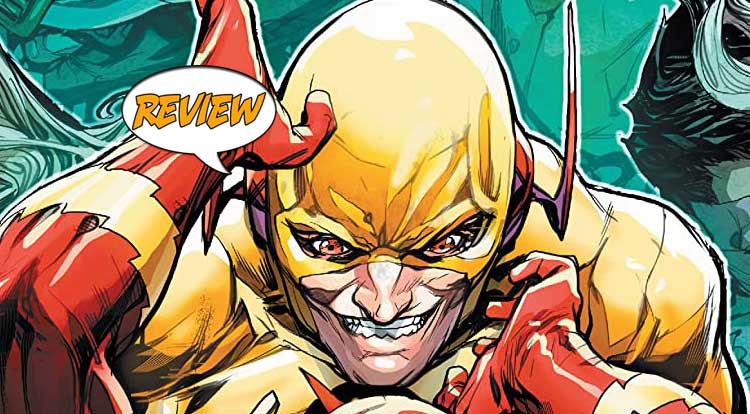 It’s the Flash Family versus the Legion of Zoom in a super-speed grudge match.  Your Major Spoilers review of The Flash #761 from DC Comics awaits! Previously in The Flash:  It’s the Flash Family versus the Legion of Zoom!  Witness the biggest battle in Flash history as the two sides go head-to-head for the fate of the future!  Can the Flash stop the unstoppable Reverse-Flash from dragging him down into a personal hell Barry Allen can never escape?

A DAY THAT CHANGED THE FLASH FOREVER

This issue opens in the 853rd Century, where Flash John Fox and his new Kid Flash make their way to the Flash Museum on planet Mercury to view a time imprint of one of the most important days in The Flash’s history.  Cut to Central City, present day, where Reverse Flash Eobard Thawne has assembled Barry Allen’s worst villains from across the timestream to attack the Flashes.  Even with the help of Max Mercury, Jesse Quick, Impulse, Flash Jay Garrick, Flash Avery Ho and Kid Flash Wallace West, it’s a seemingly impossible task, leading Max recury to throw the proverbial ‘Hail Mary’ and commune with the Speed Force itself.  Just as things look their direst, the cavalry arrives in the form of a horde of alternate Flashes, including Wally West’s kids Jai and Irey, the Negative-Flash, Dark Flash, XS and others.  Thawne reveals that he has been secretly manipulating people with Negative Speed Force energies, manipulating events throughout the Flash’s history, including his investigations with Batman regarding Rorschach’s button, Wallace West’s participation in the Damian Wayne’s jackassery in Teen Titans, and even the Flash War between Barry and Wally.  Worst of all, he manipulated Wally West to cover up the accidental deaths during ‘Heroes In Crisis’, leading to the tragedies that befell Wally.  As Barry and Thawne burst through into the timestream, the various Kids Flash figure out how to return all the villains to their own time, but as John Fox explains, there is tragedy in the Flash’s future.

I have to say, I’m impressed with how clever this issue is in subtlety retconning away recent stories that have had the Flash family acting strange (and I’m actually happy that somebody is addressing the mess that was ‘Heroes In Crisis’) and the setup to a final battle between Flash and Reverse-Flash is well-done, even if it feels like we’ve seen it all before.  With Flash threatening to kill his foe for the last time, it looks like we may be seeing another major Flash storyline reworked in the new reality.  I haven’t been paying attention to this book very closely, so I don’t know when Jay, Max, Jesse and the others returned to continuity, but this issue uses them relatively well.  The problem comes in the execution, as most of the cavalry members aren’t identified (but then again, neither are the villains in the Legion of Zoom) and many, like Tangent Flash and Dark Flash, don’t even get a line or a quick moment once they arrive.  Even with that problem, though, the issue works on most levels, and the way the issue ends is very well-done.  It looks like a happy ending, until the future Flash points out what’s on the horizon, leaving us with a very strong cliffhanger.  Porter’s art is really good, though there are a few proportion issues with the child characters (Irie’s head is kind of HUGE) and I am not a fan of the way he draws Max Mercury’s mask.

Even with tons of heroes and villains in chaotic play, The Flash #761 makes for an exciting read, with strong art from Porter that delivers on the high-speed action sequences and a story that doesn’t always capitalize on the size of the cast but is still paced well, earning 3.5 out of 5 stars overall.  I had lost track of where this series was for a couple of issue, but I’m definitely going to be on the lookout for #762 after that last page splash.

A horde of Flashes, a horde of villains and an giant evil plot make for a solid action issue with a killer cliffhanger ending.