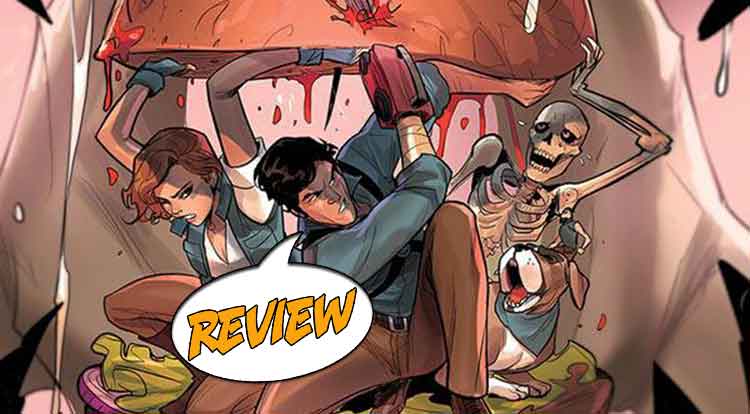 Death to The Army of Darkness #4 Review

In DEATH TO THE ARMY OF DARKNESS #4 from Dynamite Entertainment our team of intrepid Ash’s face death at every corner, and sweet, sweet temptation as well.  Venturing back to Ancient Egypt, the team witness visions of how life would be like without the real Ash.  Who gives in to temptation and can the Deadites be beaten?  Find out in your latest Major Spoilers review! DEATH TO THE ARMY OF DARKNESS #4

Previously in DEATH TO THE ARMY OF DARKNESS: When Ash’s personality is split into that of a female version, Ashley, canine Ash, miniature Ash, Skeleton Ash and sentient Chainy Ash, our Ash has to go back in time to Ancient Egypt to prevent the creation of the Necronomicon to prevent his splintering.  But do the Deadites want that?  Heck no!

Watching the first Evil Dead movie back in the 80s was a seminal moment for my tiny teenage mind.  Whereas the remake later that decade was done with more money and more laughs, this first, gonzo take was a truly terrifying experience.  Full of menace and dread, its aim was to traumatize the viewer in ways not seen before.

DEATH TO THE ARMY OF DARKNESS #4 is not based on that movie.

DEATH TO THE ARMY OF DARKNESS #4 instead takes its marching orders from the remake, and, of course, the movie, Army of Darkness.  This series leans heavily into Ash’s one liners from the latter two movies, making him a chainsaw wielding quip machine.  I sometimes lament the way the movie series descended into low farce, even as I chuckle along with them.

Writer Ryan Parrott hasn’t strayed too far from the sort of story we expect in this overall series.  Lots of action, as Ash and his fellow Ash’s battle a labyrinth in Ancient Egypt on their way to hopefully ensuring the Necronomicon is never written.  There’s plenty of one liners peppered through DEATH TO THE ARMY OF DARKNESS #4, which mostly brings a wry smile when read.

Most of the fun in this issue comes from the interactions between all the different Ash’s.  Most of that is devoted to female Ashley’s reaction to her male self.  Derision, contempt and a well based belief in her own superiority, Ashley is the purer version of her male self, a genuine hero set against her unwilling male counterpart.  There’s an element of the classic screwball comedies of the 40s, where Cary Grant and Katharine Hepburn would light up the silver screen as a warring duo.  Hopefully, Ashley and Ash won’t lock lips, as that will be taking things far too far!

Artist Jacob Edgar does a lot of the heavy lifting in DEATH TO THE ARMY OF DARKNESS #4.  With only Ash’s likeness to get right, the rest of the issue can concentrate on delivering the action and adventure the reader expects.  Edgar brings a nice sense of energy to the issue, packing it full of Egyptian themed skeletons by the dozen, while nicely realizing the various dream sequences the issue features, as our protagonists are offered a variety of temptations to betray the real Ash.

I don’t do it often enough, but a big shout out to colorer Kike J Diaz and letterer Hassan Otsmane-Elhaou.  Diaz does a great job in bringing atmosphere to the night time scenes in Egypt, with a lovely use of blues and blacks to suggest the night.  The different dream sequences have different color signatures as well, which helps differentiate each of them.  Otsmane-Elhaou’s use of different fonts also helps lend character to different scenes, from the more formal looking skeleton speech font, to the back and forth between Ashley and Ash, giving those exchanges a power and punch they deserve.  Great stuff, guys!

Overall, DEATH TO THE ARMY OF DARKNESS #4 is a fun frolic with lots of amusingly different versions of Ash.  Ryan Parrott can’t be accused of not being inventive with these different Ash’s, as they each seek to ensure their survival by the end of the series.  Good art, and good writing mark DEATH TO THE ARMY OF DARKNESS #4 and for fans of the overall movie series, this is a great issue to jump on board.

Death to The Army of Darkness #4

DEATH TO THE ARMY OF DARKNESS #4 brings the flavor of the movies to the printed page, with lots of outlandish visuals and great realization of the humor that marked the latter movies and the television series from a couple of years back. A worthy followup!