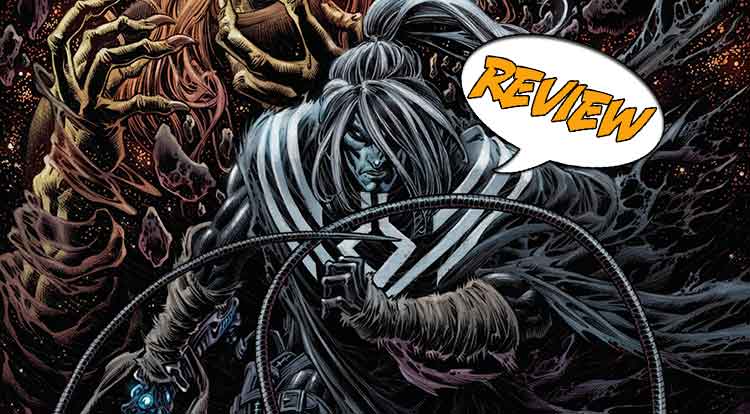 By Christopher Rondeau on September 13, 2020 0 Comments

Wraith has been hunting Knull, the God of Symbiotes. Perhaps if he can find him, Wraith will finally be able to remove his curse and find his soul. Find out in Web Of Venom: Wraith #1 by Marvel Comics! Previously on Wraith: Zak-Del is a Kree who was exiled from his homeworld and was exposed to the parasitic Exolon. As a result he is fast, has regeneration, and remains ageless. But power comes at a price and he lost his soul and became Wraith. Now with a lead on Krull, he heads back to where he was born in search for answers to free him from the curse.

MORE THAN ONE GOD

Wraith is at Marxhotz, a black site Kree prison faculty where he helps a woman who is being assaulted. This uses a valuable charge of his wrist teleporter but still opts to help the women. He then finds an old lab that his father worked at and tries to focus on his memories to see if there was something in his past. Wraith realizes that his father found a location and he uses his last teleport to go to Klyntar, the planet of the Symbiotes. He finds Krull there and looks for answers about himself. Wraith was just a failed experiment and was never meant to exist.

Unsatisfied, Wraith tries to shoot Krull but Krull is faster and takes away the symbiote and tosses him into the abyss. Unattached to the symbiote he finds a light and gains back his soul and decides to find Eddie Brock. The teleportation bracelet is spent and if he uses it it will tear him apart. Zak-Del commits and appears in the middle of New York City. He finds Eddie and warns him about Krull and informs him that there is also a God of Light out there. Zak-Del then dematerialized, leaving a confused Eddie Brock to figure it all out.

HE GOT HIS WISH

I should have realized that this book was foreshadowing Wraith’s death. Losing one’s immortality is blatant neon lights evidence of this. The book sets you up to like Wraith as a character so they can rip a piece of your heart out from under you. I enjoyed this complex story arc as it not only attaches you to a minor character; it is a great exposition to the next Venom storyline. The symbiote storylines have never interested me as much as other comic titles. But the theme of being attached to another entity and having to work together actually seems to be very prevalent. Maybe because I have a daughter who is sometimes attached to my hip now makes the theme seem a little more relevant.

The book is beautiful and I love the themes that are here. The dark gothic theme really sat well on the page. Often with the use of darker colors, I’m not sure where the emphasis actually is on the page but this one showed me where to look and gave me all the information I needed. The stark contrast between the “God of Light” and the dark symbiote world worked great as well. The only thing I really wanted was more content because Wraith is an incredibly engaging character. It felt like this could and should have been a much larger arc. 4.5 out of 5 stars for Web of Venom: Wraith #1 by Marvel Comics!

Wraith returns back to his home world to try and finally get rid of his symbiotic curse!