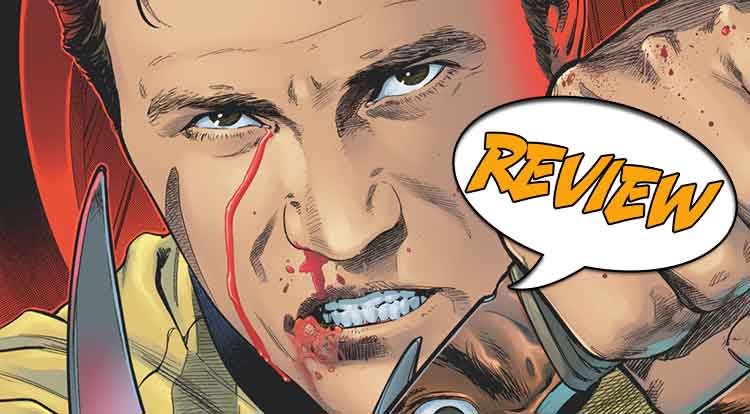 In STAR TREK: YEAR FIVE #14, Kirk runs a gauntlet on a Klingon ship, which readies itself to detonate a bomb and decimate the Federation fleet!  Meanwhile, Bones and Spock face off against a rogue Admiral, himself intent on experimenting on fleet crews.  Who lives and dies? Find out in your latest Major Spoilers review!

Previously in STAR TREK: YEAR FIVE: At the end of their five year mission to seek strange new worlds, the Enterprise has ventured back into Federation space.  Kirk and his crew have discovered that in their absence, much has changed.  With the Federation on the cusp of a Presidential election, and Klingons muttering war, what could make things worse than a Federation admiral experimenting on Starfleet crew to find the cure for a virus?

Your reviewers earliest memory was watching The Doomsday Machine while wedged between my parents in their bed in a motel room on our trip to Australia’s capital.  That’s what, forty years ago?  My word!  The Doomsday Machine is a great story, full of incidents and character moments exemplifying the best of Star Trek.  STAR TREK: YEAR FIVE #14 feels a lot like that.

While STAR TREK: YEAR FIVE #14 is very much Kirk’s story throughout, there are flashes of character moments for Spock and McCoy, who find themselves in peril while investigating the activities of Admiral Koraxi.  Spock and McCoy engage in an extended discussion about Koraxi’s activities which reveal in fine detail their approaches to the issue – Spock takes the long view, concerned about the extension of a conspiracy that involves thousands of Starfleet crew, while McCoy, in his typically direct way, concentrates on the here and now, which is escaping confinement.  In this way, writers Jackson Lanzing & Collin Kelley demonstrate their understanding of the characters, and how well they are at conveying that understanding through dialog alone.  Indeed, STAR TREK: YEAR FIVE #14 is marked throughout by very strong characterization, whether it is the Klingon Guide of Fire, who Kirk taunts about honor, to Kirk himself, who conveys the depths of his loss at the death of his brother, Sam.  The writing in this issue is the highlight of it, which, considering how great the artwork is, is saying something.

The great writing extends to the theme, which, involving as it does, the Klingons, is no surprise.  Kirk passes the Gauntlet test and demonstrates his honor in doing so, but Admiral Koraxi, who embodies the idea that the ends justify the means, clearly doesn’t.  While Starfleet isn’t meant to be the military, in many ways, it maintains the idea of honor, of doing your duty, of loyalty to the men around you and of those you command, of doing the right thing even at peril of your safety.  Koraxi has no honor – he betrays his men, indeed, he betrays the fundamentals of what the Federation aspires to by his conduct.

Artwork by Angel Hernandez and coloring by Fran Gamboa is stellar in STAR TREK: YEAR FIVE #14.  I well remember a run of comics in Doctor Who Magazine, during the era of the Seventh Doctor.  The art was great, but the artist relied too heavily on photographic references for the Seventh Doctor and Ace, which made the characters extremely stiff and unnaturally posed.  Hernandez threads the needle here; all the main characters from the television series are recognizable, but in a naturalistic manner that doesn’t distract from the overall artwork.  It’s a delicate balancing act, and Hernandez pulls it off admirably.  There’s plenty to see on each panel, especially during the Klingon sequences, where the background detail is brought vividly to life, especially with Gamboa’s coloring.  Hernandez also mixes things up, bringing a lot of different angles to his work, whether it is from overhead, or when he tilts the images and certain parts.  Sometimes, that can help convey mood, other times, it is an effort to make the printed page less static.  It all helps to propel the story forward.

Look, I loved STAR TREK: YEAR FIVE #14.  It plays with big themes, while remaining true to its integral characters.  It’s Trek grown up, dealing with real emotional issues such as guilt, alongside some real world political activities.  The writing packs a punch, and the artwork is simply amazing.

The Enterprise returns after its five year mission, and discovers a Federation on the brink of change. Against this backdrop, Kirk and his crew come through with flying colors, demonstrating why they have remained so popular even after fifty plus years. On television, film, animation, books and now comics, the resilience of the concept shines through. My only regret is coming to this comic so late.