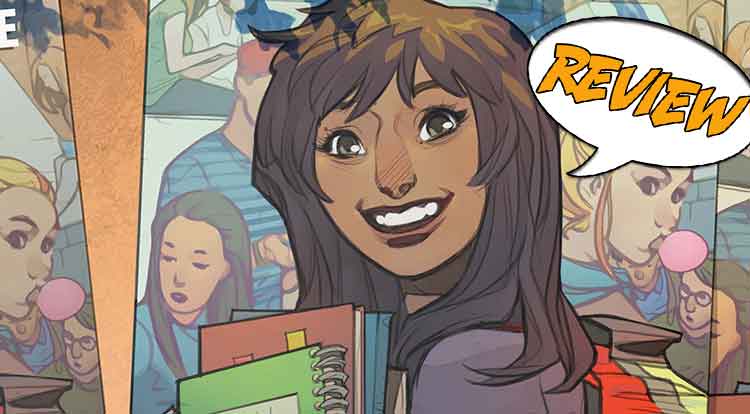 As Kamala fights to wake from her coma, the world has been changing rapidly in ways she’ll not be happy to see. Your Major Spoilers review of The Magnificent Ms. Marvel #14 from Marvel Comics awaits! Previously in The Magnificent Ms. Marvel: Stemming from the events of Outlawed #1, Ms. Marvel recovers from a traumatic ordeal, she finds herself an unwilling martyr for a movement she hates.

Time to Wake Up

The Magnificent Ms. Marvel #14 opens with Ms. Marvel still in a coma after being severely injured at the end of Outlawed #1.  While asleep The Senate has passed legislation that outlaws teen superheroes called Kamala’s Law.  Her friends and family have gathered at the hospital waiting for her to awake.  Inside of Kamala’s mind she encounters a group of different versions of herself.  They inform her that while she’ll certainly live through the ordeal the real struggle hasn’t come yet.  Each one of her loved ones take turns sitting by her bedside telling her how they want her to wake up.  This in turn results in them appearing in Kamala’s mind but they’re angry at her and blame her for bad things happening to them.  Eventually she awakes with Miles Morales by her side.  He offers to help her up, but she pushes him away and claims that since they stole her name, it’s up to her to fight it, on her own.

Shallow and A Bit Melodramatic

Since her arrival Ms. Marvel has been the premiere young superhero in the Marvel Universe; a title once held by Spider-Man.  So it seems appropriate that this issue feels like a classic Spider-Man type of book, perhaps a bit too much. One half of this issue is basically a “face inner-demon, feel guilty, walk away with resolve” type of story, which aren’t exactly rare.  What’s surprising here is how little Kamala seems to be affected by all these figments of her imagination trying to bring her down. Then with the other half of the issue we have her friends and family coming to terms with what happened.  During these scenes we see two different characters fall to their knees,  two different characters bury their faces into someone else’s chest, and one fist clenched bout of outrage that leads to a storming out to “get some air”. If you’re keeping score that should be a bingo on your “group of people sitting around in a hospital” bingo card.

The Bottom Line: Maybe Read It for the Upcoming Event

Marvel has been up in the air when it comes to their plans to continue with what they started in Outlawed #1, but with this issue it seems like they’re going forward in some capacity with that story arc. Which is good, because it gives at least one reason to read this issue. Ultimately, this issue is dragged down by old clichés, a lack of impact, and missed opportunities for character development. 2 out of 5 stars.

The Magnificent Ms. Marvel #14 does nothing new or special with the “trapped in a coma” plot, instead relying on clichés and overly dramatic moments which don’t land particularly well.