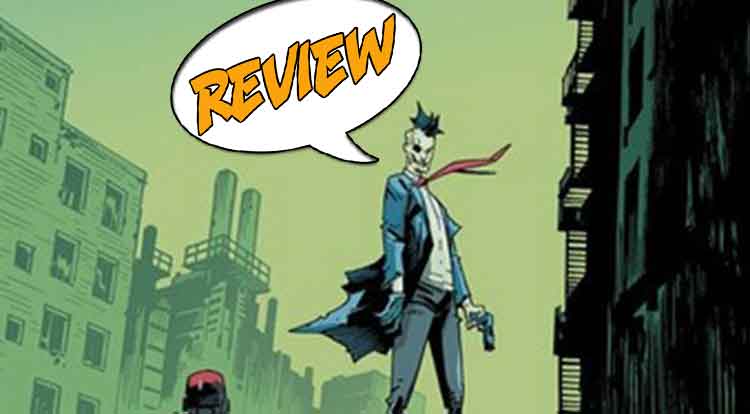 Stealth, his mind stuck in the past, pursues the Dead Hand. Can Tony find him before he kills more people, or is killed himself? Find out in Stealth #5 from Image Comics!

Previously in Stealth: The vigilante goes to one of his old safehouses, where he is shot – but it is not enough to take him out. Tony, who has figured out that his father is Stealth and is trying to find him, discovers that this is easier said than done. He hears a police report of shots fired and goes to check it out, asking Sana to keep digging into his father’s background. Dead Hand and his gang think they have Stealth cornered, but he engineers an explosion in the gas main and levels the house. By the time Tony gets there, Stealth is long gone. Tony finds some old case files in a safe on the site, and Sana has turned up some more information. Tony almost gets run off the road. He must be getting closer to the truth, but he’s running out of time!

LOOKING FOR ANSWERS IN THE PAST

As Stealth #5 opens, Tony walks into an attorney’s office looking for Randy Schmidt. The secretary tries to put him off, but he walks into the man’s office. His investigation has led him here both from trying to track down the owner of a particular house and from trying to find a reporter who wrote several stories about Stealth back in the day. The money trail leads to Mr. Schmidt.

The Dead Hand meets with a Black gang leader at an Albanian restaurant. When they leave, a van explodes. Stealth, still confused as to what year it is, has tracked them here. More things are blown up and Stealth grabs the Dead Hand, asking, “Where is the girl?” The Dead Hand is puzzled; his present dealings involve no girl. Then he figures out that Stealth is talking about something that happened forty years ago, and that he is prepared to kill the Dead Hand. The criminal is desperate and smart – he turns himself in to a passing cop, which buys him a little time.

Tony threatens the attorney at gunpoint, but Schmidt won’t budge. He talks attorney-client privilege, and that he was not the one who handled the work anyway. He doesn’t believe Tony will shoot him, and it turns out he’s buying time as he texts someone. He also lets slip that he knows who Tony is.

The Dead Hand, on his way to wherever the cop is taking him, talks about the events of forty years ago. His plan was to kidnap a girl (in the year the Republican National Convention was in Detroit) and get a lot of publicity out to build the cred of the Albanian mob. Stealth, who had been a small-time hero, decided to find and rescue the girl. The Albanian mob eventually took him out, and it was when the Dead Hand tried to open his suit that he was blasted with energy and gained the powers and scars he has now. In the course of this, the cop takes a call and starts heading away from the precinct.

The two threads converge as a security guard shows up at Mr. Schmidt’s office, and then the Dead Hand shows up and shoots the guard. Schmidt tries to turn Tony over to him, but the villain has figured out that Tony is looking for the same answers he is.

While is can be rough around the edges at times, the art of Stealth #5 is powerful at bringing the story home. It is full of skeezy characters who look the part. The attorney is middle aged, a bit heavy, and rather jowly (not to mention the strange haircut). But he’s used to dealing with crooks and holding his own, and this arrogance comes across. The Dead Hand, with his badly damaged face barely escapes with his life, but in the cop car, he relaxes and returns to his confident self despite the blood splatters all over his jacket.

The fight with Stealth is brutal and over the top, full of explosions, fire, and blood. The Blacks and Albanians are tough guys, but they are no match for superpowers directed by a demented mind. Stealth walks through the flames and the gunfire like a spirit of vengeance. He is the ultimate vigilante and seeing him so focused on his imagined mission with no thread of reality connecting him to his humanity makes it all the more awful.

BOTTOM LINE: ARE THERE ANSWERS FOR THE UNANSWERABLE?

Stealth #5 is as poignant as it is violent. The superhero who is mentally disintegrating as we watch is a powerful metaphor for the dying city that he tries to protect. Are they both irrevocably lost? That’s quite a question to ponder.

In a dying city, a vigilante rages as his son desperately tries to figure out what is going on.