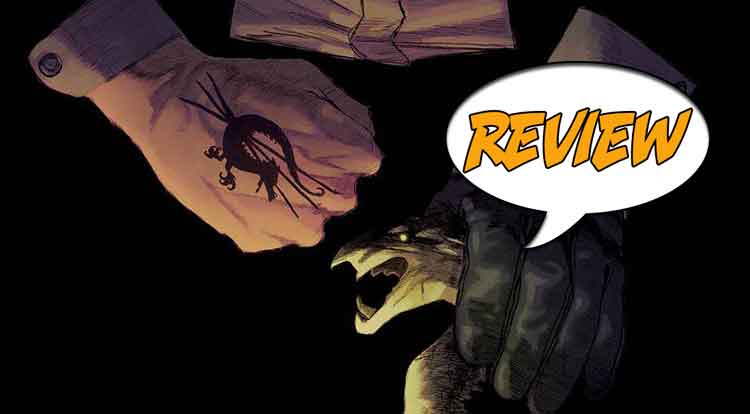 Something is Killing the Children #10 Review

Erica arrives to find Tommy under arrest and five voracious monsters on the loose. Could anything make this worse? Find out in Something is Killing the Children #10 from BOOM! Studios.

SOMETHING IS KILLING THE CHILDREN #10

Previously in Something is Killing the Children: Tommy discovers the baby monsters in the woods near the school. As he runs from them, he finds a body – and a couple kids searching for their missing brother. Tommy barely has time to tell them to run before the monster kills them too. Erica is in the hospital with James. He wakes up, confused and frustrated. Not only is she not the hero he imagined, but he knows she wants to use him as monster bait. Tommy’s friend gives them the message about the monsters near the school. And at the school, the Sheriff finds Tommy near the bodies of a couple kids.

As Something is Killing the Children #10 opens, it is Tommy’s mother’s turn to identify the body of her little girl. Outside, the Sheriff is trying to take care of things without causing a general panic, including arresting Tommy, who insists he didn’t do it. Tommy is adamant that they already know something weird is going on around town. At this point, Aaron shows up, identifies himself as the man who has talked to the Sheriff on the phone, and offers to keep an eye on Tommy. The Sheriff accepts. Tommy talks about the monsters and how he can see them, and that he can tell Aaron is from the same group as Erica. Aaron calls him a nuisance and prepares to kill him. If you were wondering just how ruthless these people are, there’s your answer.

Tommy’s friend drives Erica and James as close to the school as she can get. Erica tells James to stay in the car, but he insists on going with her. She finds the Sheriff who tells her that he found Tommy with the bodies of three children. Only Erica knows how dire the situation is as she tries to get the Sheriff to have someone take James away and to clear all the people from the area, especially the children.

Aaron injects Tommy with something, and we learn how much the Order insists on their secrets being kept secret. Erica shows up, absolutely furious, realizing that Aaron is here to cover things up, not to do anything useful. She grabs him and tries to shake some sense into him as she reminds him that there are five monsters and only three bodies – not enough food to go around. Tommy is drugged, and Erica sends him off with a deputy. On their way through the crowd, Tommy is the only one besides a little girl who sees the monster. In one of the most horrifying sequences I’ve ever read, the monster attacks her and rips her in half. The adults see only the aftermath, as though her body spontaneously tears itself apart.

Erica talks Aaron into actually helping her. He goes so far as to volunteer to fight the monsters so she can get James and Bian to safety. And the monsters come at him almost immediately.

A LONG DAY TURNS TO NIGHT

Something is Killing the Children #10 pulls no punches. The monsters are invisible to adults, so there is no reason for them to believe the children, much less Tommy, when they talk about them. This hits home so hard during the scene where the little girl is killed. She’s playing around in the middle of a crowd of people from her town – the safest place she could be – and we see her stop dead, as do a couple other children. They’re frozen, in shock, even with tears pouring out of their eyes. Before seeing the monster, we KNOW it’s there, and to see the adults entirely oblivious makes this all the more chilling.

After a couple issues of being more subdued and thoughtful, Erica is back in charge. When she goes into crisis mode, she gets so intense and focused she is terrifying. Her green eye is wide and hypnotic as though she is communicating by sheer force of will. There are a lot of widened eyes to be seen in this issue as more people realize how much more awful the situation has become. About the only person who doesn’t have wide eyes at some point is Aaron. He keeps his orange eyes narrowed, as intense as Erica’s, but in a much more inward way.

I find that a lot of horror carries some commentary about our world, and Something is Killing the Children #10 is no exception. Through the use of fantasy monsters, the literal monsters of the mundane world are brought to life and accentuated in a way that engages us and perhaps makes us think.

Something is Killing the Children #10

The bodies, families from town, and the monsters are all at the school.