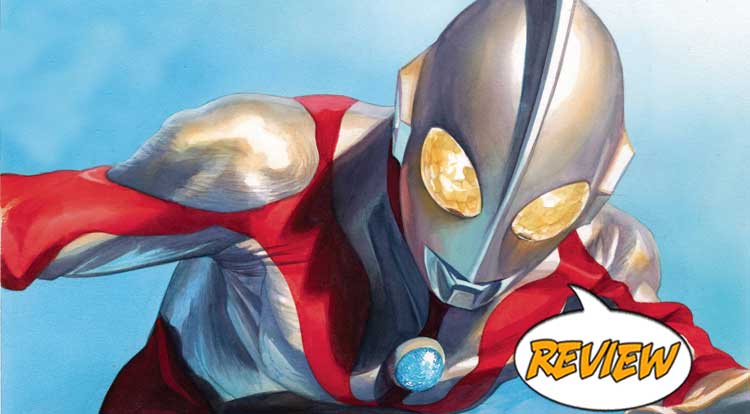 In the year 1966, an alien from Nebula M78 arrived on Earth and bonded with a human host.  It’s happening again…  Your Major Spoilers review of Rise of Ultraman #1 from Marvel Comics awaits!

Previously in Rise of Ultraman:  In darkness there lurks Kaiju… terrifying and unfathomable monsters.  Between Kaiju and the rest of us stands the United Science Patrol!  But who are these enigmatic defenders, and how do they perform their miracles?  Shin Hayata and Kiki Fuji have spent half a lifetime trying to find out and their quest is about to drive them toward a decades-old dark secret and put them on a collision course with a mysterious warrior from beyond the stars!

We open in 1966, the year of the original Ultraman TV series, as Agent Moroboshi (using props and costumes from ‘Ultraman’ as well) flies in to investigate a strange meteor plunging to Earth.  It strikes his ship, and he is surrounded by strange energies, seeing a strange, giant ghostly figure.  Cut to the year 2020, where Akiko Fuji heads to work with the United Science Patrol.  She’s frustrated by being sidelined, until Agent Muramatsu calsl upon her to fix his K-Ray sidearm, taking her into the field with him as they investigate a Kaiju report.  They are nearly killed, until the arrival of Shin Hayata, who has built his own Kaiju tracker and weaponry, bailing them out with a quick save.  It becomes clear that Hayata and Akiko have a complicated relationship, but when she is once again called into action, Shin comes along.  They find a  strange glowing sphere, out of which comes the same ghostly figure that seemingly killed Moroboshi in 1966, but rather than attack, Shin reaches out to it…

This issue also features a backup story of Ultra Q, the series that ACTUALLY began the Ultraman series, presented in black-and-white as the show was, as well as several one-page ‘Kaiju Steps’ gag pages featuring humorous takes that also explain more about the universe in which this story takes place.  All in all, it’s an interesting revamp, though it’s clear that they’re taking some liberties with the continuity of the show.  All the art teams are impressive here, but special note must be given to Michael Cho’s take on the ‘Ultra Q’ chapter, somewhere between Darwyn Cooke and Michael Avon Oeming, but I really like the art throughout the book.  I’m a little bothered by where the cliffhanger in this issue falls (making it clear that we’re seeing a story made for the collected edition) but it’s a solid first-issue on most levels.

Even though I still resent a $5.99 price tag, this issue is double-sized and may constitute the biggest comic book push for Ultraman in United States history, making The Rise of Ultraman #1 worth checking out, with well-rendered art and a story that was exciting without forcing me to a wiki page, earning 3.5 out of 5 stars overall.  I’m not sure how many liberties they’ve taken with the source material, but for a casual fan, this makes for a good first issue experience.

I'm by no means an Ultraman expert, but this issue makes an interesting case for finding out more.