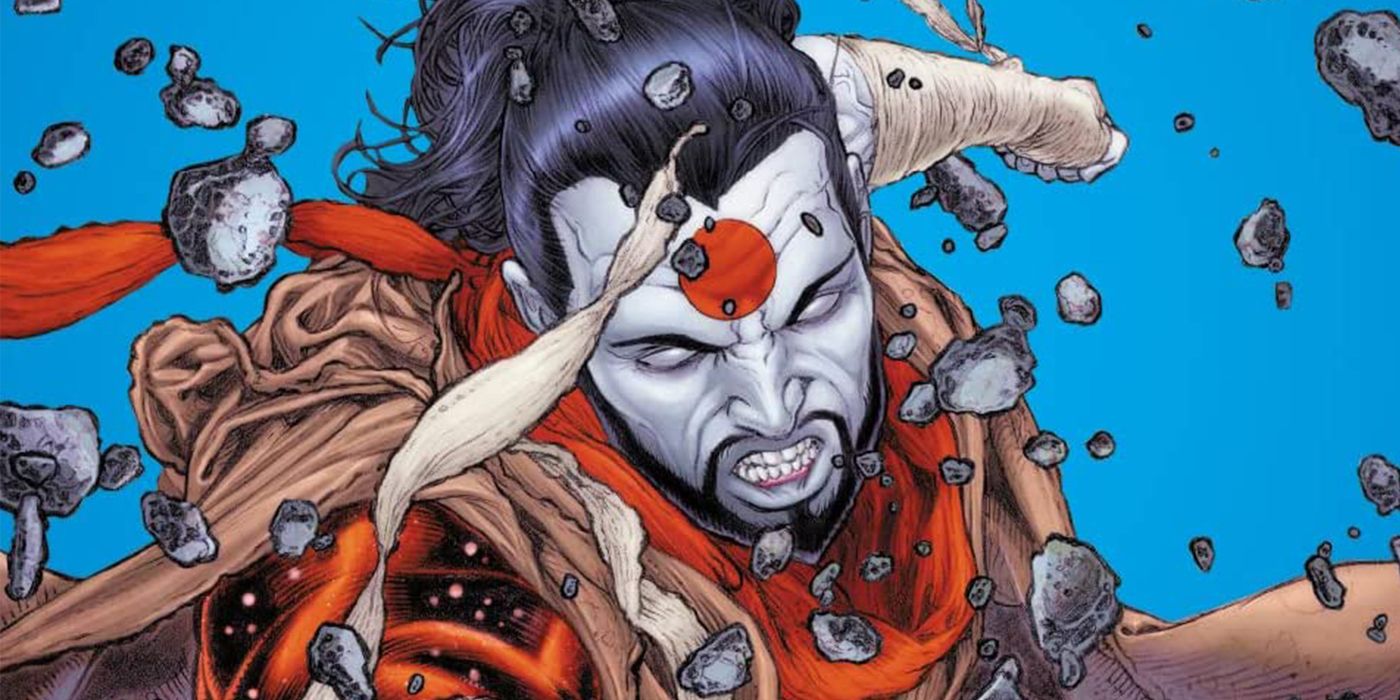 Dan Abnett is a legend in the comic book community. If you are a regular Major Spoilers podcast listener you’ve heard his name often (especially if you are following all the Legion of Super-Heroes references thrown about!). Presently, he’s garnered acclaim for his work with Valiant’s latest incarnation of their comic book universe!

Major Spoilers caught up with Dan to chat about the return of Rai #6 and what he can bring to the character he has populated the series with.

MAJOR SPOILERS: Going all the way back, how did you come to the RAI title to begin with?

DAN ABNETT: I was invited to write the series by editor Lysa Hawkins. She figured – correctly – that the blend of science fiction, superheroics and future-world-building was my sort of thing. MS: Myself and many readers know your work as being expansive, mythology-expanding, and full of sci-fi goodness! RAI #6 continues in this same vein. How did you decide which type of civilization Rai & Raijin would encounter for this new issue?

DA: We’ve been keen from the start to keep it as varied a possibly, simply to show the potential range and wonder of all the strange realms and enclaves on the future Valiant Earth. This particular part of the story is an attempt to contrast with the wild elements we’ve had so far (post-apocalypse wasteland, high tech smart buildings, dinosaurs, farming communities, etc, etc) by focusing on… well… Roman Empire realness, malevolent supernatural horror and…. An SF take of a folkloric ‘otherworld’. This place has everything!

MS: With each issue we get another glimpse at the power players in Rai & Raijin’s world. What are the logistics of planning out these reveals and Easter Eggs?

DA: The set up of the series is, at heart, very simple – good versus evil, as represented by Rai’s single-minded quest to end the threat of father. So a lot of the logistics are an effort to show the various shades of grey in between – the other factions, parties, cultures and interests around… some side with Rai, some with Bloodfather, some with neither.  We wanted to create the idea of a fairly complex world, a mosaic of different interests, agendas, affiliations, and even tech levels.

MS: Was meeting Tekus and his society an intentional foil to the wild gang Raijin takes down in RAI #1?

DA: Yes, absolutely – and a throwback to the technologies of New Japan, and the role of ‘historically authentic’ positronics in New Japan’s entertainment culture. Positronics are sentient beings – they’re simply artificially engineered – yet they are regarded as ‘lesser’ or even as ‘toys’.

MS: Or did you go with the Romani to challenge Juan Jose Ryp?

DA: I knew he’d be up for it :) I knew he’d pull off something that looked utterly, warts-and-all historically ‘real’, as though we’d travelled in time… and then we reveal a stranger truth.

MS: What is collaborating with Ryp like? Does his art inspire you to explore specific things in the narrative?

DA: Juanjo’s fantastic and an astonishing artist.  As we’ve worked on the series, I’ve realised he can bring pretty much anything to very vivid and very real life, so rather than that directing me towards specific things, it’s given me the creative confidence to try ideas that can be really outlandish or strange, knowing he will visualise them convincingly.

MS: Are there unique challenges for you working in Valiant’s world compared to other comic universes you’ve worked in previously?

DA: All Universes have their ‘rules’ and ‘restrictions’. The Valiant world is particularly ‘open’ because its future has not been explored (very much!), and it also has a very solid basis in conceptual SF themes and extrapolated technologies, which suits me well. The trick is, I think, to make it still feel like the Valiant Universe – to acknowledge the ‘connective’ tissue’ to the characters and ideas that make Valiant Valiant.

MS: The relationship between Rai & Raijin is one of my favourite aspects of the series. Readers know Raijin is on a ticking clock. Why did you choose to include this tension between the two protagonists from jump & how will it change in the coming issues?

DA: It’s certainly an interesting double act. Raijin is the prototype and the ‘older brother’ even though he looks like a child, and though he is entirely synthetic and Rai is part human, Raijin often displays a more ‘human’ outlook, mainly due to Rai’s singular and determined sense of purpose. Raijin is almost, ironically, Rai’s human conscience. They’re learning from each other all the time, and their evolution is constantly in flux. We’ll see their personalities – and the conflicts between them – open up in the issues to come.

MS: What is their relationship influenced by?

DA: Well, any sibling relationship… perhaps any friendship. But it’s also, oddly, father and son, or adult and child… in both directions. You may care to see echoes of all sorts of things in there… Batman and Robin, Lone Wolf and Cub, The Mandalorian… but theirs is a unique interplay that is simultaneously unbalanced yet equivalent. By that, I mean they are each, in different ways, the superior and inferior, the adult and the child, the mentor and the pupil.

MS: What are some Easter Eggs or moments you want RAI readers to look out from in the coming weeks?

DA: Well, lost of things, but particularly three big surprises that reveal unexpected links to Valiant lore. I’d tell you what they are, but the Spoiler Police would arrest me. I think Valiant readers are going to love them. MS: Do you have any advice for new creators looking to break into comics?

DA: I think many of the ‘traditional’ ways for creatives to break into comics – such as approaching, and networking with, fellow creatives and editors at Conventions – are reducing a lot. In fact, I’m not entirely sure what the ‘routes in’ are now.  But take advantage of opportunities, such as portfolio reviews or open submission windows when they arise… and when you do, follow the ‘rules’. Editors want to see talent, but they also want to see creatives who can understand and follow a brief. I have seen several tremendously talented writers, for example, fail at open submission opportunities because they decided ‘they knew better’ and didn’t follow the submission brief (even though what they submitted was well written). The comic industry, at the commercial level, requires talent, but it also requires professionalism… such as being able to follow a brief, to be reliable and on time, and to be responsive to feedback. The specific way I broke into the industry is a matter of serendipity and largely irrelevant: I think what was important was that I had spent a lot of time reading voraciously and writing (for myself) so when the break came, I had some self-taught ability ready to go…. I had built up some creative muscles and stamina. You can’t go in cold, just assuming you can do it. And from the outset, I understood I needed to learn. I’ve been learning ever since. Artistic integrity and self-belief are very important, but they need to be tempered by an ability to listen, to learn and to respond to editorial feedback. You need a thick skin. Criticism is never nice, but positive criticism should be regarded as a ‘free gift’ that can make you better at what you do. And if you get your break, be prepared to work hard: working in comics is not the glamorous job “they say it is”. It’s demanding, exhausting and often isolating. I’ve made it sound terrible… it’s not. It’s immensely rewarding on a creative level, but it requires some serious application and dedication.

MS: Of all the characters you’ve written is there anyone who you think could go toe-to-toe with Rai?

DA: Gosh, even on a “what if” that’s tough to answer – different ‘universes’, different ‘rules’. Based on ‘raw stats’ alone, Rai could feasibly handle all sorts of other major characters, but might also be wrong-footed in surprising ways.  In all honesty, it would come down to the story, to the circumstance, and what makes dramatic or vivid sense. I could see a story, for example, where Rai could defeat a far ‘superior’ opponent (let’s say… Galactus, or Ultron) because of ingenuity… likewise, I could see him being taken down – by surprise – by something unexpected (Green Arrow, Zatanna, Daredevil) where it seemed the odds were technically in his favour.  Clashes that might be interesting… Rai vs the Flash, Rai vs Gamora or Drax, Rai vs Deathstroke… those are the sort of places the ‘what if” becomes fascinating…

MS: How do you think Raijin would fare if he were recruited to a Legion team?

DA: That’s a fun suggestion. I think Raijin would make a superb and appropriate recruit to the Legion ranks :)