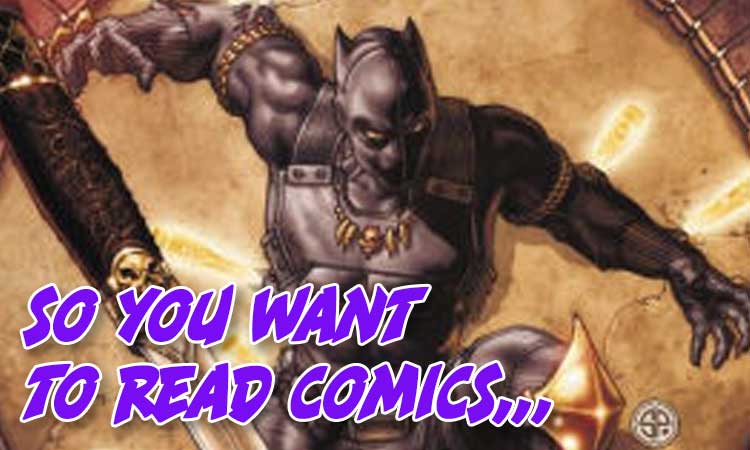 So You Want to Read Comics: Black Panther Edition

As many of you know, the world lost a wonderful talent and person when Chadwick Boseman passed late August and my deepest and most sincere sympathies and respects to his family, friends, and loved ones. Yet, with any tragedy it’s possible to find a bit of positivity and that is what this week’s edition of “So You Want To Read Comics”, will try to do.

Chadwick Boseman made a career of taking already larger than life people like Jackie Robinson, James Brown, and Thurgood Marshall and elevating them even higher with his portrayals of them.  But, it was his role as T’Challa aka The Black Panther that most people will remember him as and it was his performance that helped propel that movie to an Oscar nomination.

As of writing this Comixology has made nearly all Black Panther titles free to purchase and download.  Now, The Black Panther as a character has existed for nearly 50 years and in that time has amassed an impressive backlog of comics featuring and starring him so while you may want to use this opportunity in the face of tragedy to read some comics knowing where to start may not be so easy.

Hopefully these following suggestions will help introduce you to this important part of the Marvel Universe and comic book history as a whole.

Black Panther: The Man Without Fear

So a bit of a caveat with this suggestion: This one on its surface will not seem new reader friendly considering it’s a product of two separate major events in the Marvel Universe. Yet, there isn’t a better run to establish who T’Challa is as a character.  In this run, Black Panther has come to the Hell’s Kitchen neighborhood of New York City to take over for Daredevil.  But he has done so without any of his famous technology or support from the nation he has been king of for decades.  He assumes the identity as an immigrant business owner and must learn who he is as a person and a hero when he only has himself as a resource. On top of this, this run addresses some heavy social issues like racism and xenophobia that reveals the sort of problems that minority groups face outside the borders of Wakanda.  Also, quick note:  This series changes name to Black Panther: The Most Dangerous Man Alive halfway through.

In the wake of Boseman’s passing, many are wondering what will become of the cinematic adaptation of the character.  Thankfully, the comics may have already provided a glimpse at a direction that the movies may move in.   This run of Black Panther comics sees T’Challa’s sister Shuri taking on the mantle of Black Panther as well as assuming the role of leader of Wakanda. What’s fascinating about this run is that we see Shuri who had up to that point been a secondary character suddenly forced to confront the major conflicts of a universe that has been going for a long time in her own unique way, much like what would happen if Disney goes this route with their Black Panther movies.

So, what did you think of these recommendations?  Do you have some suggestions of your own? Let us know in the comment section below.