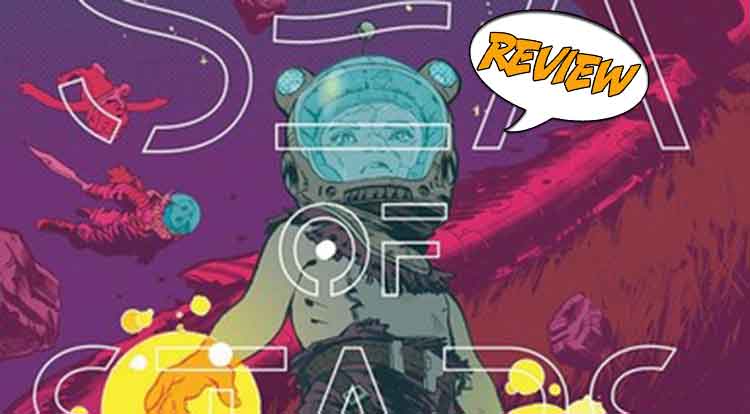 Gil has found his son, but with him just out of arm’s reach, the leviathan has returned.  Your Major Spoilers review of Sea of Stars #6 from Image Comics, awaits!

Previously in Sea of Stars: Even as space trucker Gil and his lost son Kaydn are about to be reunited, the evil forces of the Zzaztek seek to intervene. And when Kadyn finally unleashes his new god-like powers, then god help anyone in the blast radius.

Sea of Stars #6 opens up with Gil and the Sun Shaman trapped in a cavern of some sort.  Gil begins trying to stabilize the old man’s condition.  Elsewhere Space Dolphin and Space Monkey are in hot pursuit of Della’s pet bird, thinking it must know something about what happened to Kadyn.  With some clever thinking and a big mouth, Space Dolphin manages to capture the bird.  Things then jump back in time to just after the end of Issue #5.  Kadyn is powered up fully and ready to take on the leviathan,  but as he’s starting to take it to the space beast he’s given pause by something.  During this time Della calls out the name of the war club that is buried in Kadyn’s chest which makes him disappear. Back in the cave, the Sun Shaman begins to rant about everything he’s done, including how he had cut Kadyn during the ceremony. Hearing this sends Gil into a rage and he proceeds to unleash it on the Sun Shaman. After that Space Dolphin and Space Monkey show up, none of them sure of where they are.

The first thing that hit me when I started reading this was how needlessly confusing it was at first.  The first half of the comic is technically the 2nd half of the chronological story with a flashback in the middle, then a flash forward to the end. To add onto this is the fact that there isn’t a clear identifier of the time at the beginning of the comic.  Once things are laid out though, this issue is pretty similar to the rest of the series.  The side characters are the ones that push the plot forward, while Kadyn plays with his new powers and Gil endures John McClaine levels of abuse before inflicting massive violence himself. It’s not a bad comic on it’s own, but this series had been meandering and this issue basically puts things back to where they were, Gil teamed up with some creatures,  Kadyn lost in space, rather than shaking things up a bit.  Not that what we get isn’t entertaining, the interaction between Gil and the Sun Shaman is appropriately tense and unnerving, and Space Dolphin and Space Monkey are enjoyable as always and the place the characters end up at the end of the issue is a fun little snag that should lead to something fun.  There’s just not a lot of forward motion plot wise.

Sea of Stars #6 and as a series as a whole has wild swings when it comes to the artwork.  On one hand, it has some of the best space sequences out there, the usage of purples and blues mixed with conscious placement of stars, moons, and other celestial bodies make them a sight to behold. There’s also been a wonderful sense of scale in this series and specifically in this issue when we see the leviathan crashing into the moon, you can feel how big everything is.  Then on the other hand things get muddy when multiple characters share a panel, especially when they’re in motion.  It’s a little hard to always tell where everyone is in relation to each other and what exactly they’re doing.

Bottom Line: More of The Same

If you’ve been a fan of each issue of this series, then Sea of Stars #6 will be right up your alley.  If you were hoping for a change in the status quo, especially after how the previous issue left off, then this isn’t going to be as satisfying.  The same can be said for the artwork, the shift between grandiose space ballet and somewhat confusing interpersonal moments are on full display here.  3 out of 5 stars.

Sea of Stars #6 follows the formula established by the previous issues, but doesn’t do enough to shake things up in an interesting way.