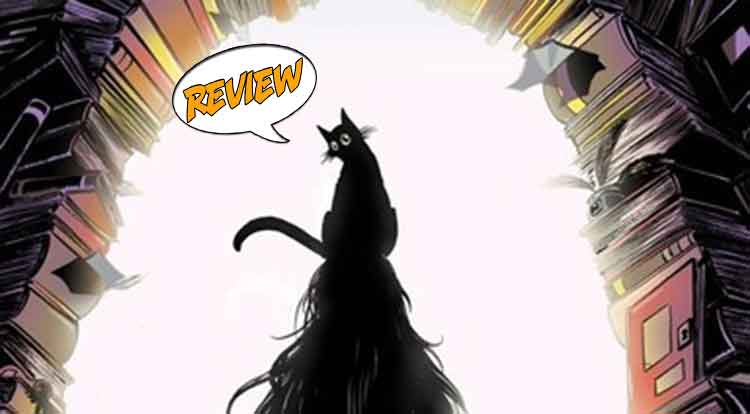 What started out as a normal day working in the library changes completely after the arrival of a magical cat. How completely? Find out in Inkblot #1 from Image Comics! Previously in Inkblot:  Xenthas Voidbreaker is King of the known world. He and his remarkable siblings have traveled the world over and when that was done, they separated and visited other worlds. All except one, the Sorceress Savant, who stays at home chronicling their exploits as she has for hundreds, even thousands of years. Until one day…

Inkblot #1 opens with what is almost a creation myth. The sorceress, whose name we do not learn, tells the grand story of her family. Her brother Xenthas Voidbreaker is the oldest of the bunch, and he is King. His birth heralded the birth of civilization. He also discovered that killing magical creatures gave him and his siblings strength and longevity. They have lived for thousands of years, hunting, studying, and civilizing as they went and drawing followers to them. After running out of magical creatures on their world, Xenthas broke through the void, opening new realms. They have all moved on while the Seeker (the Sorceress) remains at the Library of the Living Castle, continuing to chronicle them. She has recorded every bit of their histories as an anonymous scribe.

One day she dozes off at her work and knocks a bottle of ink off her desk. When she awakens, a vortex of magical energy swirls in the library then diminishes, leaving behind a small black cat with huge green eyes. She realizes she probably summoned it in her sleep – but what is it? Where is it from? Did it come from the Void? Is it actually a demon?

The cat, fully like a cat, wanders off through the library and rolls around in her paperwork. As she finally grabs it, a portal opens up to The Mountainlands. The cat wiggles free and leaps through, and of course she needs to chase after it. Her sister Vikka now lives in the Mountainlands. They happen upon a pair of giants who decide to chase after them until the sorceress lets loose with some magic. She grabs the cat and spots a portal leading back to the Library. They leap back through and are safe for now, although the cat slips away and wanders off again.

There’s a lot of background to cover in Inkblot #1 and the art does a fine job of moving it along. The establishing shot of The Living Castle (where the library is located) shows that it is a place that has been grown rather than built. Immediately we get a sense of the magical. We see snapshots of the other Realms as well as of the Seeker’s family. They certainly appear to be like classic legendary heroes. They’re also people of color which makes this book all the more interesting. After all this activity, the book focuses on the library, and let me just say, this is a library that looks like you could get lost in. It is huge, full of shelves several stories tall in addition to stacks, some neat and some messy, of books yet unshelved.

And then there is the dramatic splash of ink. It’s always amazing how such a little bottle can be full of so much ink (speaking as someone who has spilled ink before). When the cat appears out of all of this, it is charming and funny. The style has been realistic so far, and while the cat certainly acts like a cat, its huge green eyes are sparkling and almost cartoon like. The cat is so inky black it is the silhouette of a cat – we see it perfectly because of its outline and those eyes, but we don’t see any other features (such as a nose or toes). It says only, “Mow,” but if you know anything about cats, you fill this in with all the possible inflections cats use.

Inkblot #1 starts out feeling epic, but the introduction of the cat immediately takes it to a more human level. The art brings to life an engaging setting, and I think the book has a lot of promise.