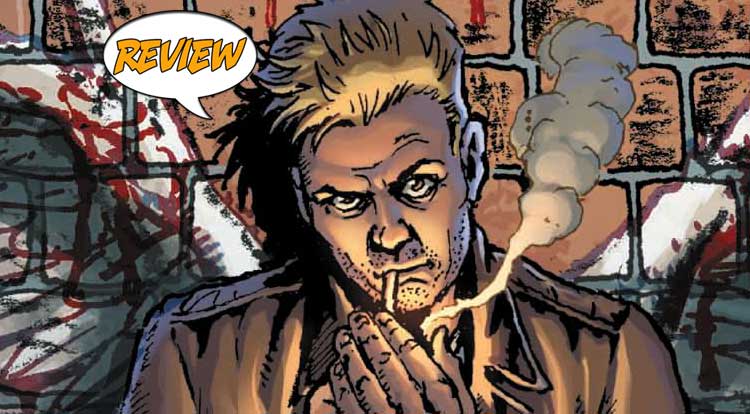 It’s a match made in heaven: John Constantine and DC Black Label.  Your Major Spoilers review of Hellblazer: Rise and Fall #1 from DC Comics awaits!

Previously in Hellblazer: Rise and Fall:  A billionaire falls out of the sky and is gruesomely skewered on a church spire.  Bizarrely, Angel Wings are attached to his back.  More follow until, hallelujah, it’s raining businessmen. Detective Aisha Bukhari is stumped by this, until she’s visited by her childhood friend, occult investigator John Constantine.  How do these killings tie to the first death on John’s hands?  How does this involve heaven and hell?

And even if this is kind of John’s fault, will Constantine be happy to let a few more rich bastards fall from the sky, like a vindictive Robin Hood?

THE ADVENTURES OF LI’L CONSTANTINE

Our story begins with a birth: John Constantine’s birth, to be exact, including the moment where his mother first laid eyes on her beautiful baby boy.  Strangely, Mary’s death during childbirth (a well-established bit of Constantine lore) just… sort of happens?  She is sitting and talking with the nurses when someone takes the child from her, and we smash cut to her tombstone.  it’s a strange moment to read about (and not just because previous stories have shown us this moment before, with a stillborn twin brother in the mix) and one that sets the tone for what is about to happen.  Several years later, we catch up with John and a couple of his friends as they set out on one of his first experiences with magic.  Naturally, it goes wrong, leaving all three kids swept away by a flood of sewage and mud from the river, leaving young Billy Henderson dead.  In the present, we catch up with John’s surviving childhood friend Aisha, now a police officer, as she encounters a scene that seems to be the weirdest murder ever: A man with wings, impaled on a lightning rod, as if thrown from above.  Aisha is surprised to find her old friend John showing up, while her partner is surprised and killed… by the long-dead Billy Henderson!

The Black Label imprint is a curious one for me, as it never seems to mean anything more than a couple of curse-words and perhaps some extra violence, but it’s especially odd to see in a Hellblazer tale.  Classic Vertigo John had cursing and semi-nudity and horrific violence of all kinds, so what this issue really brings to the equation is the art of Darick Robertson, which ends up being the best part of it all.  There are panels of the resurrected Billy that literally gave me chills, and the overall effect of the visuals is a sense of dread and impending evil.  It’s really nicely done, especially since the scripting leans a bit heavily on coincidence and synchronicity for my tastes.  The brutal death of Officer Gary by his own handgun is pretty shocking, but the transition into they sequence (while well-drawn) is a little confusing, and even though the final page reveal of Lucifer’s involvement makes me want to see what happens next, it too comes out of left field.

BOTTOM LINE: CRANKING UP THE VIOLENCE

In short, Hellblazer: Rise and Fall #1 is a pretty good issue, with some storytelling problems that are partially (but not quite completely) overcome by really strong art, and even though it doesn’t feel like it breaks new ground, it’s strong enough to earn 3.5 out of 5 stars overall.  With the news that the DCU main Hellblazer title is about to end, the arrival of this Black Label miniseries is doubly puzzling, but overall, it’s an okay comic book experience.

This issue amps up the violence, but other than that, it doesn't feel that different from the old-school days at Vertigo or the modern take on John.