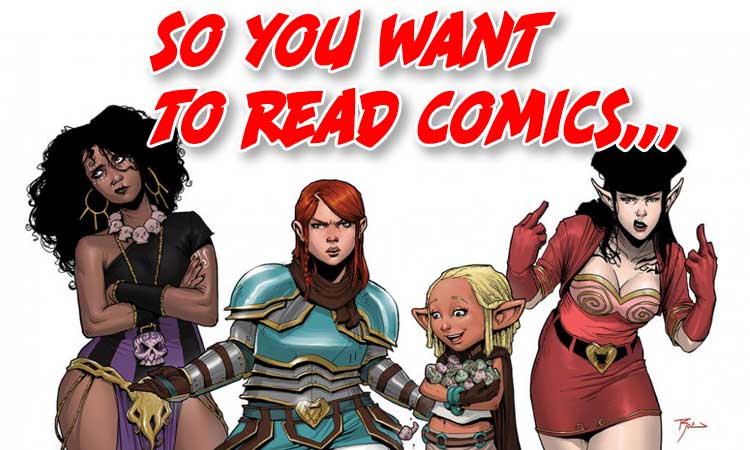 So You Want To Read Comics: TTRPG Edition

You enter a room, with a curiosity for comic books, make an insight check, nat 20! You’ve found “So You Want To Read Comics” our weekly feature where we introduce new readers to comics based on their interests in other things.  This week we’re looking at comics for fans of TTRPGs.

Starting in the early 70s, Table Top Role Playing Games have been a vehicle for people to live out their greatest fantasies, come together with others, form new friendships, explore their creativity, and create memories ever since. Be it Dungeons & Dragons, Pathfinder, Vampire: The Masquerade, or any of the thousands of TTRPGs available, tabletop roleplaying is here to stay and has only been elevated in recent years by the advent of internet based systems like Roll20 and actual play podcasts (like Major Spoilers’ own Critical Hit).

It should come as no surprise that TTRPGs are popular with comics creators and are often cited as being an inspiration and have included elements from their experiences into their work. Which brings us to two comic series that should feel familiar to TTRPG fans, regardless of their game of choice.

Purchase this volume via the Major Spoilers ComiXology Affiliate Link

Die is the story of a group of people who were transported into a dimension where their favorite RPG was real and they spent 2 years there before escaping.  Now as adults, they’re once again transported there. Die is the quintessential comic for those who spent their childhood lost in their own imagination, only to find that the world they dreamt up, isn’t what they hoped as they reached adulthood. What Die does so well is hiding themes of lost youth, disenfranchisement, toxic nostalgia, and a reluctance to move on, into a fantasy adventure filled with familiar tropes and scenarios that TTRPG players will certainly be familiar with. Reading Die is a two-fold experience, one that will make you long for simpler times, but also become reflective on your own life and how those two things can be intertwined.

Speaking personally here, as much as I enjoy a good adventure packed and intense gaming session, there’s something about being with a group of friends who want to bend and twist with the traditional concepts of a TTRPG in fun and silly ways that will always hold a special place in my heart.  That’s where Rat Queens comes in. This is a comic fantasy tale that is filled with just the sort of characters I’d expect my friends to come up with, like an atheist Cleric, a thief with a taste for drugs and candy, and an elven mage who looks like they’d be really into old pin-up art. The plot also plays out just like a long running group’s games typically go, with The Rat Queens acting as a group of adventurers going chasing down jobs and having to embark on personal quests. This is simply the perfect comic for those who don’t take their gaming too seriously.

Did you check out these recommendations? Did they delight and entertain? Do you have some suggestions of your own? Let us know in the comment section below.