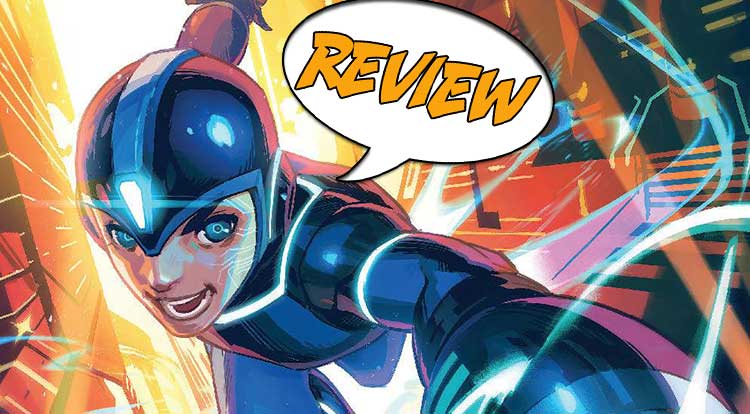 Mega Man is back with a new comic book series! Join Mega Man, Dr. Light, and other heroes as they try to prevent a second war between man and machine. Check out Mega Man Fully Charged #1 by BOOM! Studios.

Previously in Mega Man: A new creative team takes on this popular character and sets in the TV-series world of Mega Man Fully Charged! Mega Man is a robot built by Dr. Light and he lives with his human sister, Suna and robot dog, Rush. However, there was a war between man and machine that became known as the Hard Age. Now the second Hard Age is right around the corner and the Light family is caught right in the middle of it!

Dr. Light is chosen to be the diplomat between the humans and the robot Skull Man. However, Skull Man never intended to make the meeting peaceful and tries to kidnap Dr. Light. Luckily Mega Man is here to save the day! During the fight, Skull Man begins to drill a hole into Mega Man’s head and activates latent memories. Dr. Light and Rush are able to save him and they return to Silicon City to decompress from the day’s event. Mega Man is highly confused by the memories he saw and confides in Suna who suggests he goes to the leading expert in Hard Age history! Meanwhile, a person who looks like a purple color scheme Mega Man is spying on him and says “brother” under his breath.

NOT THE BEST FATHER FIGURE

I understand that Mega Man is supposed to be a superhero but I felt very uncomfortable watching a father throw his son into danger. Mega Man then has an identity crisis and he brushes it aside. This is a kids comic book and this theme seems pretty adult. And this theme is pretty intentional and prevalent within the comic. For kids shows, I am used to forgiving a lot of odd scenarios in favor of keeping it kid friendly but the artwork and writing seems fairly gritty. This is then contrasted by the cartoonish violence that you normally would expect. I’m intrigued and I didn’t think I would be from this title.

Are we going to see a Mega Man storyline targeted at an older audience? I am not familiar with the cartoon series but now I want to check it out. Might be the next cartoon for my daughter and I to watch together. However, this is a $4.99 title but is not longer then a normal $3.99 title and that concerns me. I was hoping to get some more content for the price point but I can’t fault a company or creative team trying to charge what they think the story is worth. The writing and art is extremely well done and expertly executed. 4.5 out of 5 stars for Mega Man Fully Charged #1.

Megaman comes back to comic book form to tell an exciting new story! Will he be able to prevent the second Hard Age?