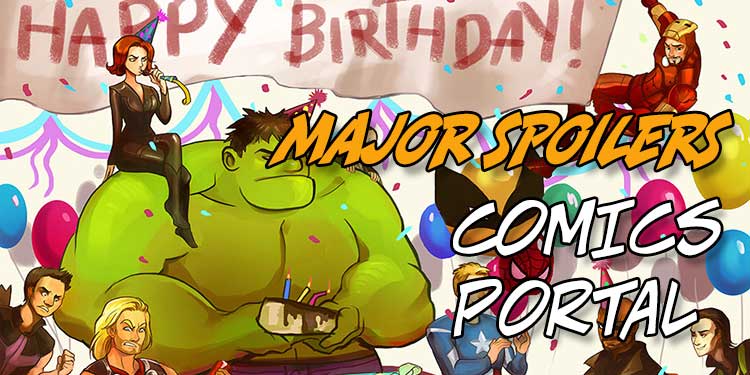 As reported here on MajorSpoilers, Marvel is beginning a week-long celebration of their 81st birthday today! Of course, I have some ideas about how you can join the celebration! Even though Marvel has now turned 81, they’re still considered by many fans of the industry as the “in” or “hip” comics producer. Not bad for an 81-year-old, huh?

So, what’s this event all about? Let me briefly quote their news release:

On August 31, 1939, MARVEL COMICS #1 opened the doors to the Marvel Universe for the first time ever, creating a tapestry of Super Heroes and stories that have gone on to shape pop culture for generations of fans around the world. Join your fellow True Believers online for special segments celebrating this momentous day on This Week in Marvel, Women of Marvel, Marvel’s Pull List, Marvel’s How to Draw LIVE, and Marvel’s Let’s Play, and tune in all week to hear from some of your favorite creators and editors celebrating 81 years of Marvel!

Of course, fans are also invited to join in the party by sharing their favorite Marvel-inspired treats such as cake, cookies, and pies, to ordering a commemorative birthday art poster by Ron Lim and t-shirts and other apparel with art of various marvel characters. It will all wrap up on Friday with the debut of the Marvel’s Avengers game on PlayStation 4, Xbox One, Stadia, and your very own PC.

You can find out even more ideas on how to get involved in the festivities if you go to Marvel.com.

HOW CAN YOU CELEBRATE?

The closest thing to an 81st birthday stone is a ruby at year 80, which is pretty close to the red color in Marvel’s logo. However, not many of us can afford to send the House of Ideas such a gift. I’m sure I’m not the only one to suggest these, but I think the best ways you can support the House of Ideas are as follows:

MY ‘BEST OF MARVEL’ While Spidey is the top character in the House of Ideas, I prefer the lower-tier guys and gals, including the Black Knight (my all-time fave), Stingray, Sunfire, and Yellowjacket (before he became a spouse abuser). I do like Namor the Sub-Mariner (I used to pronounce that last word as the “sub-maREENer”), but like the aforementioned Black Knight, Marvel never seems to land on one version of him since he’s covered the gamut from Lex Luthor to Aquaman, if I can employ DC examples.

I’m sure I’m in good company when it comes to my favorite storyline in Marvel. It was the Dark Phoenix Saga, which was heartbreaking. To see Jean Grey go down in flames (literally) that way was tough to read, but it was like film of an auto accident—I couldn’t take my eyes off it.

The Marvel comics I’m buying regularly these days include Hawkeye Freefall, The Immortal Hulk, and anything that has the Black Knight in it. Dane Whitman is currently in Savage Avengers, so I’m getting that book now.

MARVEL IN THE MEDIA It would be tough to talk about the House of Ideas’ success without at least touching on their movies. They have done extremely well with their film franchise, with the Avengers films at the top of the list.

I’m interested to see how the Marvel movies will do since some of their main heroes are out of the picture, including Iron Man, Captain America, and possibly Thor. The Captain Marvel film did pretty well, but they need other characters to step up, as it were, to take up the slack and keep the film franchise going full steam ahead. New Mutants didn’t perform as well as some hoped the movie would, but it’s coming in during the time of the pandemic, so the number of moviegoers is still significantly down from before, and even that was a number on the decline.

The TV shows are pretty much over for now, but rumors continue to swirl that they’ll be back on the small screen soon in some fashion or another. Stay tuned!

If you are a Marvel fan, this is still a great time to enjoy product from the House of Ideas. Given the number of comics they are releasing, it doesn’t look like they’ll be letting up any time soon, either!

What do you think? What do you enjoy most about Marvel? What are their best titles right now? Where would you like to see the House of Ideas go in the future? Whatever your opinions, please share your thoughts in the space below!