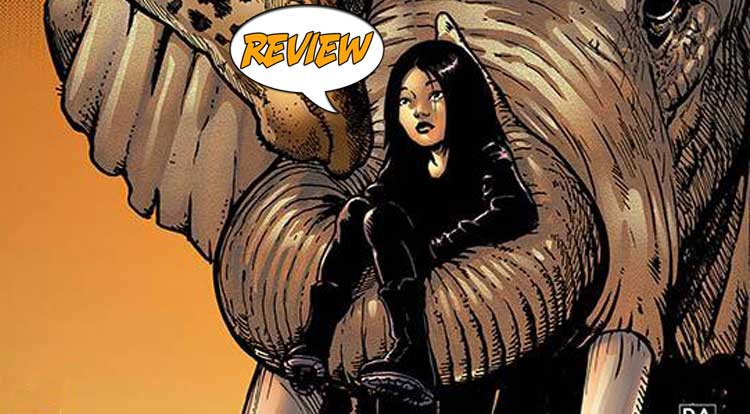 What’s past is past… except when it comes back to bite you in the gluteals. Your Major Spoilers review of The Boys: Dear Becky #4 from Dynamite Entertainment awaits! Previously in The Boys: Dear Becky: Butcher risks a collision course with Mallory, as he exploits a voice on the inside of Vought’s latest superhero operation. But his memories of Becky make the dangerous game he’s playing all the more difficult. Hughie, meanwhile, is pushing his luck in another way entirely…

Our story begins in the past of Billy Butcher’s memoirs, relating a tale of murder and mayhem as The Children of Stormfront (a group of probable-drug addict racists who claim to be Scandinavian gods, resembling a certain Marvel superstar) find out that double-crossing Butcher is a very bad idea. While The Female of the Species kills and maims the would-be heroes, Butcher makes a deal with Vikor, one of the wannabe gawds, to get closer to neo-N*zi super Stormfront (who, not coincidentally, is slated to be part of The Boys Season 2, coming soon to Netflix.) Once he returns to headquarters, Mother’s Milk and The Frenchman are astonished to find that Butcher is working without authorization and breaking the rules of their commander Colonel Mallory. We also get to see him once again happy with Becky, though it’s not clear if that’s a flashback within a flashback, or something taking place at the same time as the Stormfront plot. As the issue end, Wee Hughie (who is, in the present, reading the story we’ve been told) realizes that these are the events that triggered Butcher to set out to kill all the supes.

…A LOT OF COLD-BLOODED MURDER AND MAIMINGS

This book is really dark, from Becky worrying that Butcher is going to kill himself to The Female’s graphic murders (one character is shown with her shattered femurs protruding through shredded flesh) to the final page revelation, and it was a VERY hard issue to get through. The problems with the nested flashbacks (if they are flashbacks?) is shared by nearly all the scene transitions in the book, and to a lesser degree, the series to date. It’s not clear in this issue when ANYTHING is happening, and even knowing the story to date, I found the last scene difficult to understand. Russ Braun’s art is a conundrum for me, as well, as it feels like he’s intentionally aping Darick Robertson, but doing so in a way that does his own work a disservice. When it feels like Braun being Braun (like a scene of the delinquent children smoking), I like the art, but on the whole it feels somehow off, especially when it comes to any female characters.

Admittedly, The Boys: Dear Becky #4 is the story of a man reading the diary of a deceased friend that he had to kill with his bare hands, living in a world of flying murderers, but even on those terms it’s dark, upsetting and off-putting, with problems in both art and scripting leading to a slightly disappointing 2 out of 5 stars overall. I’m not sure if the series outgrew me, or vice versa, but either way, I find this miniseries less likable than either the original comic or the charming-but-very-different Netflix adaptation.

I'm just not enjoying this series the way I once did, and I can't tell if it's the change in art, a new tone or just fifteen years, but... This issue was a real chore for me.