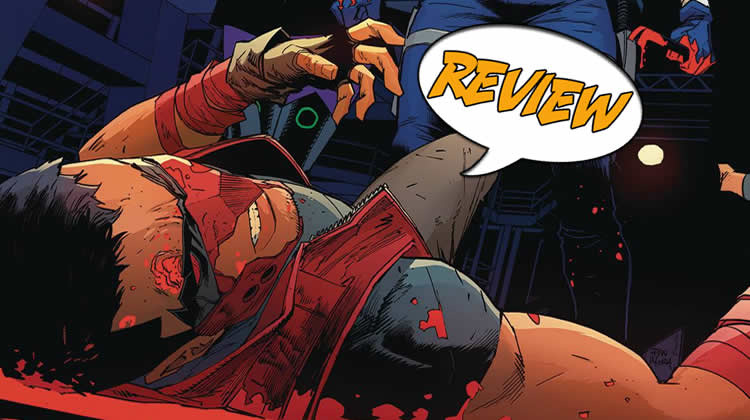 By Wayne Hall on August 28, 2020 0 Comments
The Joker War rages on, even creating “collateral damage” that involves Jason Todd, the Red Hood. Take the jump for our review of Red Hood Outlaw #48 from DC Comics. Solicitation: A family reunion with Ric Grayson doesn’t go as planned as he brought along his new friend: Punchline!

TYING UP A LOOSE END

Some of my very favorite stories are ones that resolve situations that are just sitting there, clearly waiting to be taken care of.
This issue does just that. And it does it in an interesting way. I won’t spoil just what that is exactly, but let’s just say it has to do with Duela Dent, the so-called “Joker’s Daughter.”
This is a prequel of sorts to the Joker War, and it is the first time Red Hood encounters Punchline, Joker’s new henchgirl. She’s employing a strategy Jason has encountered before with the Joker, and it has to do with beating Duela into submission. When Jason tries to intervene, an obviously brainwashed Dick Grayson stops him. The creepy part is that Dick is wearing a Joker-like mask that even broadcasts the villain’s voice.
Despite Jason’s best efforts and promises, he can’t stop the building where all this is happening from blowing up. Sadly, he even finds what sure looks like Duela’s dead body, cradling it in the same pose that Batman was in when he found Jason’s corpse after the Joker had killed him.
There are twists in the story, though, that will make for interesting developments later on. This will be a tie-in certainly that appears to be a must-read because it has the potential to be important to the entire war, I believe.
I particularly enjoyed the distinctions and similarities brought out in this issue between Jason and Bruce as well as displaying the way their connection initially was made. Bruce makes Jason a sandwich, and he does it in such a way that it breaks down Jason’s barriers. Later, Jason shows no hesitation when he’s about to drop a building on some of Joker’s minions, something Bruce would never do. It’s one of the best Red Hood stories I’ve ever read, actually. Really!

Brett Booth’s art and layouts really shine in this issue. There’s one particular double-page spread when Jason is battling the aforementioned Joker’s goons that was quite eye-catching, so be sure to watch for it. It’s a beautiful example of how to handle action sequences, something I always pay close attention to.
I also look for how the artist handles facial expressions, which can really propel the story along well. There’s one panel in which Jason is shocked to hear Punchline beating Duela with a crowbar, a sound he’s very familiar with. We only see his eye since the rest of his face is covered by his broken mask, but we clearly experience his shock and surprise. Superbly done! The whole issue is chock full of that kind of sequence.

As I mentioned, I have a feeling this book is going to be an important one in the Joker War event, something I’m really gripped by. When you reach that last page, you’ll see why I’m saying this. I’ve been waiting a long time for this to be resolved, so I can’t wait to see what happens next.
I’m not optimistic that this title has much of a future, sadly, because the last page also says that the next storyline is called “End of the Outlaws,” but we’ll see. I know DC is big on Batman and his entourage, but even the Batgirl book was recently cancelled, and she’s a much better-known member of the Bat-family than Jason is. Yikes!

I have a feeling this book is going to be an important one in the Joker War event, something I’m really gripped by. When you reach that last page, you’ll see why I’m saying this. I’ve been waiting a long time for this to be resolved, so I can’t wait to see what happens next.