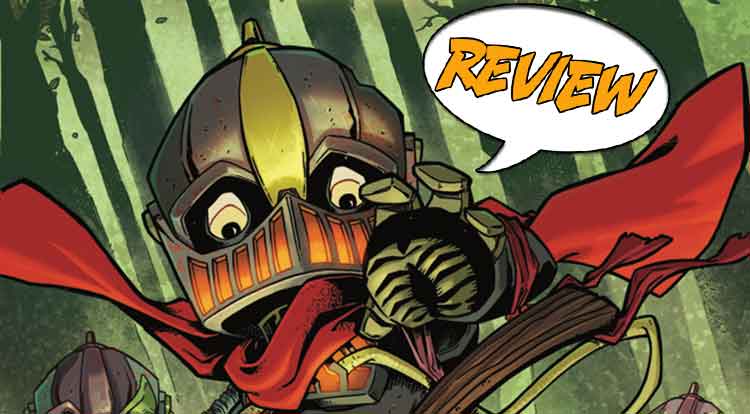 Canto’s people are free, but their hearts are winding down – and fast! Can Canto find a solution or must they return to servitude in order to survive? Find out in Canto II: The Hollow Men #1 from IDW Publishing! Previously in Canto: Canto and his people are tin people with clockwork hearts. Living a life of nameless slavery, they toil until their clockwork hearts stop. Canto was given his name by his love. With this and his memory of a story, he travels into the world to find the hearts of his people and save his love. He fights an evil sorcerer but finds there are no hearts to rescue. He returns home too late to save his love, but discovers his people found the courage to take back their freedom from the slavers.

TIME IS A PRECIOUS COMMODITY

Stories are important, and Canto II: The Hollow Men #1 opens with a retelling of Canto’s battle with the Shrouded Man, who suddenly appears before the little warrior – but it is just a dream. He gets up and finds Falco outside his room. Falco is responsible for training people to fight off the Shrouded Man, although he plainly feels this is unlikely after so much time has passed. Their current city of New Arcana has grown hugely since they settled here.

Two more of the tin people, Rikta and Veratta, meet them riding Malorexes. They challenge Canto and his Malorex to a race through the forest. Rikta wins – at the edge of a cliff – closely followed by Canto. Veratta slides in late and is flung over the edge but catches herself. They pull her up, apparently unharmed. But as they decide to return home, Veratta suddenly feels unwell and collapses. Her heart just…stopped.

The Elder is able to restart her heart, but he tells Canto that this is only a temporary fix. Their hearts are all winding down. They have only a couple months to live – except for Canto. After his encounter with the Shrouded Man, and after the Elder repaired his clock, the enchantment was lifted. Canto alone will survive. He decides to ride out to find the source of the curse and lift it from his people. His intention is to go by himself but he is met on the edge of town by Falco, Rikta, and Veratta. Whatever happens, he will not be facing it alone this time.

We get the sense that time has passed before Canto II: The Hollow Men #1 even starts. Finally, Canto’s people have a place they were able to choose as a home. New Arcana is as beautiful and hopeful as old Arcana was grim and lifeless. This is a city built in and through several enormous trees. I love a treehouse city, and this one has a lot of character from cozy interior rooms to huge networks of stairs and walkways and even elevators. Canto and Falco review their army from near the top of the tree, and the view of them on the field below is impressive. The inking has some flavor of a woodcut that fits with the folktale flavor.

I like that we have more characters for Canto to interact with, and I really respect the art of these guys. Canto’s people are all made of tin, their faces (if they have any) hidden beneath a helmet and mask so that their only mobile features are their eyes. Their expressions are all in the eyes, the body language, and the lettering. And it works so well. I like how each of them has an inner fiery glow that shows through their outer shell. The character design gives each of them some subtle detail that sets them apart from the others and this, too, is deftly done.

BOTTOM LINE: THE NEXT DESPERATE CHALLENGE

Canto II: The Hollow Men #1 is an excellent jumping on point. The book has a one-page summary of the first story arc, so it’s quick to get caught up. The world is incredibly beautiful, and the additional characters are lively and engaging.

Canto’s people start a new, free life only to find that their days are numbered.