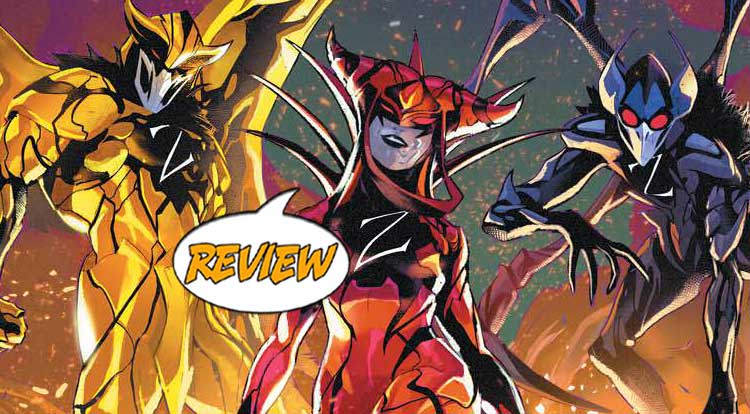 The Dark Rangers are back, and deadlier than ever… Your Major Spoilers review of Mighty Morphin’ Power Rangers #53 from BOOM! Studios awaits! But what is the full extent of Lord Zedd’s master plan?

On the moon, Rita Repulsa mockingly destroys a Putty Patroller, only to have Lord Zedd IMPALE HER THROUGH THE CHEST and declare that she’s right, the clay warriors do need an upgrade. It seems that this isn’t the actual Rita at all, but a Putty duplicate who has been cast by Zedd to fill out his team of Dark Rangers. Along with Squatt, Baboo, Goldar and Finster, she is transformed and sent to Earth on a mission of destruction. While that’s going on, we see the island labs of Promethea, where Blue Ranger Billy and ex-Red Ranger Grace (from the 60s iteration of the Power Rangers) have figured out the ultimate upgrade: How to repower the Green Ranger’s Dragoncoin. Grace doesn’t trust Zordon with the new weapon, instead wondering if they shouldn’t choose their own new Green Ranger, and even has a suggestion: Drakkon! Billy isn’t thrilled with the idea of repowering the man who nearly killed all Rangers everywhere. Before their argument can be resolved, though, Rita and her Dark Rangers attack Angel Grove, provoking a response from the six Rangers…

…who promptly get beaten down by their evil counterparts.

The fight sequences in this issue are clearly designed to drive home just how dangerous a threat the Dark Rangers are, with Squatt even joking that he doesn’t know what to do when he wins, having never done it before. It just feels like it goes on for too long, with more than half the issue devoted to the battle and accompanying quips and comebacks, with the big cliffhanger being the appearance of evil Zords to make it even more lopsided. I’m all for seeing heroes challenged, even getting beaten down, but the focus on the combat here detracts from the ongoing Drakkon drama and the bigger picture. What’s more, the transition between Billy on Promethea and the Rangers arriving is very sudden, while the opening sequence featuring “Rita” is unclear to the point of incomprehensibility, thanks to some vague dialogue from Lord Zedd. The art in this issue is okay, especially when it comes to the Rangers, but the decision to have the Dark Rangers as indistinct monsters of blob and shadow (not unlike Venom or Toxin at Marvel Comics) doesn’t work, making some of the already-long battle sequence visually murky.

All in all, though, Mighty Morphin’ Power Rangers #53 gets a lot right, featuring some fun back-and-forths between the Rangers and a difficult threat to conquer, but some issues with the presentation affected my enjoyment of the issue, and the apportioning of battle and non-battle not to my liking, earning a still-better-than-average 3 out of 5 stars overall. The usual superior quality of this title allows me to forgive them an outing that isn’t as successful, but it may also make this issue’s problems feel more pronounced. Here’s hoping they get back to their regular stride sooner rather than later.

I like the brief Billy and Grace side-plot, but the rest of the issue feels like a long walk for a short drink of water.