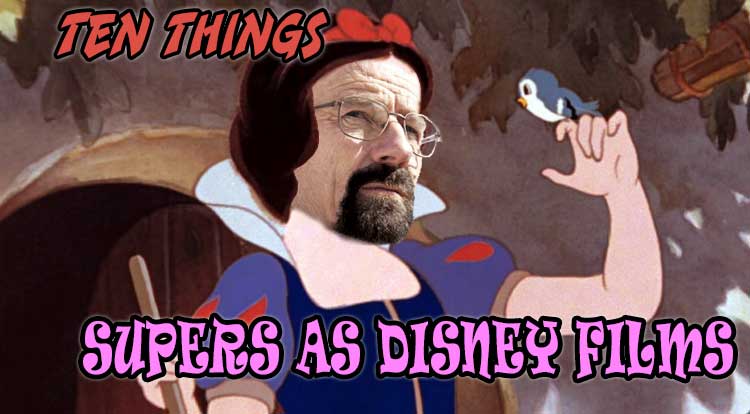 Whooshman-Bicarbonate Films, in conjunction with An Amateur Comics Historian and the legendary frozen head of the late Walter Disney, Presents: After his debut as a pawn of Baron Zemo, Simon Williams “died” saving the Avengers from the Masters of Evil, setting off a cycle of tragedy that would last for years. In truth, Simon was only in the patented Death-Like Coma, and twelve years later (real-world time), he rose, first as a zombie, then as an energy-powered dynamo. Like Princess Aurora, his return caused as many problems as it solved, but at least there wasn’t a giant black dragon to fight.

None of this explains how the “dead” Wonder Man appeared as part of Kang’s Legion of the Unliving in 1975, but then again, nearly every member of that group was revealed to not actually be dead in the first place. Though he’s no Fred MacMurray (to be fair, what superhero not named Captain Marvel is?), this member of the Space Canine Patrol Agents could probably turn into him. An ally of Krypto, Chameleon Collie made three appearances circa 1966 or so before his team was deemed too silly and sidelined. The SCPA later returned as part of the ‘Krypto the Superdog’ animated series as The Dog Stars, but he didn’t make the cartoon cut.

Of course, given the history of collies in TV/film, it’s entirely possible that he was played by a dog of the opposite sex… 🎶 Ollie Queen and Black Canary
Walking through Star City!
Laughing back and forth
At what the other one has to say.

Reminiscing this and that
And punching out some crim’nals!
Oo-de-lally, Oo-de-lally
Golly, what a day! 🎶 A minor antagonist of Superman and Wonder Woman, Crash (real name unknown) seems to be robotic in nature, resembling a crash test dummy, but his remarks to fellow villain The Debutante make it clear that he wants to be a real boy. Granted, that seems to be so he can have some real sex, but regardless, a Blue Fairy would be much appreciated.

Instead, he got punched into the pavement by the Man of Steel.

6) THE MANY ADVENTURES OF WINNIE THE POOH – The Owl A very early entry in the superhero genre, NIck Terry is just a man who lost faith in the justice system and vowed to take things into his own hands. He shares a name (and horn feathers) with the wisest animal in the Hundred-Acre Wood, though NIck tends to punch more. The Owl ran for about three years in the 1940s, with a short revival in the 60s, and has become part of several different shared-universe tales in the modern day, thanks to the one-two punch of “resembling Batman” and “being in the public domain.”

It’s not clear why he thinks that owls are purple.

5) THE SWORD IN THE STONE – The Shining Knight

An honest-to-Merlin knight of Camelot, Sir Justin was frozen in ice during the 6th century or so, only being awakened in circa WWII. As a member of the Round Table, he was gifted a magical sword that can cut through nearly any substance, which served him well as a member of the Seven Soldiers of Victory and the All-Star Squadron. In most tellings, his enchanted blade is not Excalibur, but it explicitly is in his TV appearances on ‘Stargirl’, and his successor/alternate self, Ystina, also identifies their blade as such.

We never see him pull it from a stone, but I like to think that it happened. Though his origins are unclear, it seems unlikely that this unusual and obscure hero was created by a literal Ice Princess to entertain her little sister. The protector of an arctic tribe that may be Inuit, he spends most of his time as an inert statue, but when his people cry out for protection, the Snowman is there to answer the call with his frosty fists and trusty hatchet. In his sole published appearance, he threw a man to his death into a pit of alligators (!!), so he’s clearly not a Josh-Gad-voiced wacky cartoon sidekick. An Olympic gymnast and respected entomologist, Priscilla Conway is the partner of Mikros and Crabb, insect-themed (and sometimes insect-sized?) French defenders of justice. I’ll be honest: There’s not a lot of overlap here, save for the “-rella” prefix, but in Ten Things land, we sometimes take what we can get.

It would be cool to see the hulking Crabb, with his huge claws, dressed as Fairy Godmother, though. Bagheera the panther (which is to say, a leopard that is all black) was the protector and friend of Mowgli, the young protagonist of Kipling’s ‘The Jungle Book’, as well as the cartoon adaptation. (For some reason, he didn’t appear in ‘TaleSpin’, which I’m going to chalk up to the producers not meeting his price to return.) About a million years earlier, an as-yet-unnamed member of the Panther Tribe of Wakanda was the first to take on the mantle and power of their Panther god and fight for his people. A member of the Avengers of 1,000,000 BC, his strength and wisdom impressed even Odin himself, and he began a legacy that continues all the way through the current Black Panther, Prince T’Challa.

I suspect that he didn’t sound like Sebastian Cabot, though. After being abducted and believed dead for years, Elizabeth Kane was raised by a cult called The Religion of Crime, and grew to be a very unorthodox criminal mastermind, speaking in rhymes and endlessly referencing Wonderland. As an adult, she clashed with Batwoman, secretly her twin sister, eventually returning to something resembling her right mind, thought still obsessed with the works of Lewis Carroll. She even managed to become a crimefighting partner to her sister as Red Alice, saving her from the vampire Nocturna, before being brainwashed back to her mad tea party persona.

Say what you will about her gimmick, that costume is AMAZING (and much cooler than any apron dress.)

This week’s Ten Things topic, Ten Supers as Disney Films, is all me (natch) but feel free to follow along @MightyKingCobra for more Ten Things madness on Twitter! Or you can check out the full Twitter archive here! As with any set of like items, these aren’t meant to be hard and fast or absolutely complete, if only because we haven’t yet gotten to ‘The Unidentified Flying Oddball’. Either way, the comments section is Below for just such an emergency, but, as always: Please, no wagering!