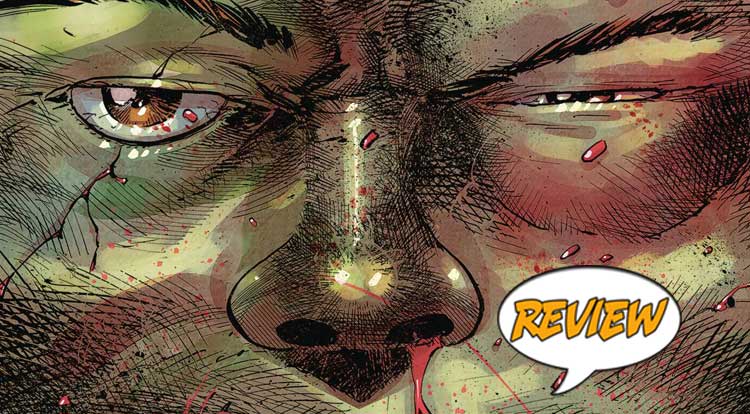 The first Dragon is back… or is he?  Your Major Spoilers review of Savage Dragon #251 from Image Comics awaits! Previously in Savage Dragon: After a shocking return, Malcolm Dragons has to put the pieces of his shattered life together…  but what will his dad have to say about it?

“YOU GOT THE FIN WRONG.”

Moments after last issue’s big cliffhanger, we rejoin Malcolm as he opens his apartment door to find… his father, the Savage Dragon.  He immediately assumes that it’s a clone or a robot, and points out that the fin is wrong, but the green man at the door explains that he both is and is NOT Malcolm’s dad:  He’s the original Dragon, the one who appeared in Erik’s comics BEFORE the launch of Image, dating all the way back to 1982.  Somehow, he was drawn through a portal in issue #249, and though the combination of realities has given him the merged mind and memories of all the Dragons from multiple realities.  As he reintroduces himself to his former family, we discover that his version of Jennifer was named Susan, and she was murdered, and while he remembers Angel, his world never had a Malcolm Dragon.  As for Alex, who loved the Dragon, it’s a chance to have her lost love back.  There’s a lot of quiet reintegration moments, one big murderous fist fight, some mind control and a hunk of the trademark Savage Dragon sexy-sexy, ending with both Dragons finally accepting of their situation.

I’ve talked a number of times about my love/hate relationship with Savage Dragon over the years, and this issue is a perfect example of how and why that happens: This is literally Erik retconning in his original character and history nearly thirty years into an ongoing narrative, and it’s both bold and inventive, as well as infuriating.  Savage Dragon has had three or four different universal recombinations over the years after all, and we’ve seen a number of stories where the original Dragon died and returned through some convoluted series of events.  That said, I really enjoy the way this issue addresses that change, focusing on the personal toll of such upheavals rather than some universal view and showing us how weird it must be on a personal level.  Dart appears briefly in these pages, making me think something big is brewing there, and the story continues to address the real-world COVID-19 epidemic, blurring the lines of fantasy and reality even more.  Larsen even makes a point to render the returning Paul Dragon with his original fin and at the smaller size, making Malcolm tower over him at several points during the story.

BOTTOM LINE: COULD HAVE DONE WITHOUT MAXINE’S FANTASIES

The art in this issue is well-done, and the storytelling choices are clear and interesting, which helps to offset the fact that Savage Dragon #251‘s plot hinges on literal comic book nonsense and brings back a version of the character that I’d imagine a majority of current readers have no idea ever existed, but it all still wraps itself in some entertaining moments, with the biggest problem being Maxine’s ongoing libidinous madness, earning 3 out of 5 stars overall.  Even with Malcolm’s wife suggesting threesomes with both his brother and his returning pseudo-dad and a hard-to-wrap-the-brain-around case of time and space travel shenanigans, this comic makes for an interesting read.

Even as someone who knows the real-world history that Larsen is riffing on here, this issue brings everything to a screeching halt for a few pages before it takes off again. I hope it's going someplace.