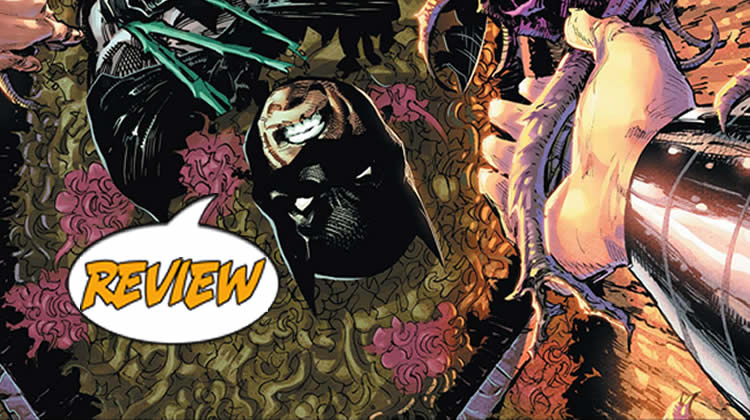 SOLICITATION: At the mercy of the Black Mercy! As they return from their adventure on the planet Trotha, the Justice League crashes on the homeworld of the Black Mercy! There, they fall prey to the most powerful psychological threat they’ve ever faced! Written by Jeff Loveness (Cartoon Network’s Rick and Morty), this two-part descent into the dark corners of the superhero psyche will unearth fresh horror.

Like the Borg in Star Trek: The Next Generation, the Black Mercy is great in small doses. But if we come across it too many times, well, it loses its luster. The original tale from Alan Moore was quite a stunner, and it was used effectively recently in an Aquaman annual by Phillip Kennedy Johnson. I do worry, though, that we may be running out of stories dealing with this unique alien plant.

This two-parter is what I think of as the “ultimate” Black Mercy story. It’s not just a seed on the loose now, it’s a mature Black Mercy that is a whole planet in itself. Yikes!

So, just what is the Black Mercy? Here’s the answer from dc.fandom.com: “Black Mercy feeds on the psychic energy produced by the victim’s interaction with his/her ‘dream.’…When someone discovers the Black Mercy-created reality is fake (their lives aren’t this perfect), the Black Mercy will slowly lose its grip on its host, making it easier to detach from them.” Apparently, if someone does NOT break free, they can be completely drained and thus die, which we see has already happened to some of the folks in the center of the Mercy.

The scary part of this whole story is that, once the League even came in range of this thing, they were already under its influence. I’m curious to find out more about just how they ended up here in the first place! How did the Black Mercy draw them to itself? Is it really that powerful?

One of the most interesting parts of this issue happened early on, with Batman examining his dislike for “endings.” “Is that why you never stop?” he considers. “Because you have nothing else?” When I read that, I should have known he was in trouble! Bruce just is too busy for that much self-examination!

Most of this issue contains the League being trapped into the Mercy itself, with the last page being more about Bruce and just who might stop him from going through his endless cycle of action. Nice surprise I’m not going to spoil here!

The heroes are true to their individual characters, and it’s interesting that they can’t even let their guards down for a moment before something even more powerful is trying to sink its claws into them.

When you are stuck inside a planet-sized enemy, it’s going to be as dark as it was in the space you were just traveling through. The art matches that feel quite well, and it is foreboding in just the right way.

As always, I examine facial expressions and action/movement-oriented sequences to judge art. The faces of the heroes were well presented, with them often wary to scared as they slowly discover the peril they’re in. There’s a lot of activity and plant-cutting going on, as there should be in a more dramatic rather than action-filled story. I found the desperation the heroes began to slowly uncover really well portrayed.

One of the great story devices I always enjoy is exploring a hero himself or herself to see what really makes that person “tick.” This issue sets up the last of the two parts, and it will be next month in, appropriately enough, issue #52, a popular number at DC.

I just hope the heroes just don’t slowly realize they are living lives that are “too good” and wake up the way we’ve seen happen before. It would be great if there is something else, a surprising “rabbit out of their hats” to free them this time. We’ll see!

8.3 At the Mercy of the Black Mercy

The scariest part of this whole issue is that, once the League even came in range of this thing, they were already under its influence.