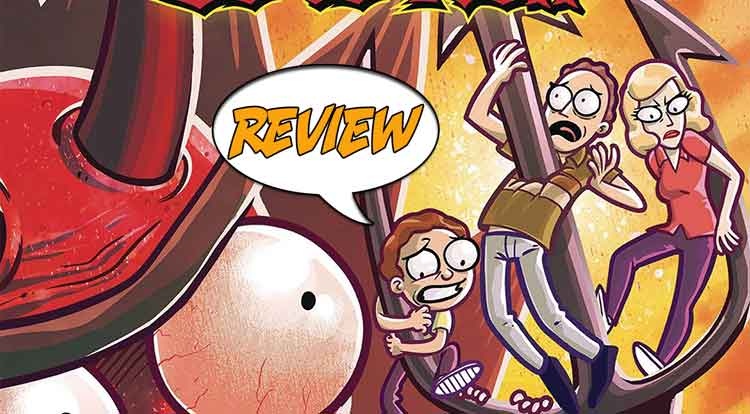 In RICK AND MORTY GO TO HELL #3, Rick and Morty are in, well, Hell!  Slogging through a desert, they are devoured by a Dune-sized sandworm, and find the digestive tract the worst place to be!  Meanwhile, Jerry finds he’s created a monster, as the damned in Hell rise up against their Satanic overlord!  Is it Hell no! Or Hell yeah!?  Find out in your next mighty Major Spoilers review! RICK AND MORTY GO TO HELL #3

Previously in RICK AND MORTY GO TO HELL:  Rick and Morty, along with the rest of Mrty’s family, have ended up in Hell.  To be honest, it’s where they deserve to be, but that’s by the by.  While Rick believes there is no hell, and this is some sort of trick or hallucination, Morty falls under the sway of his belief in a Christian Hell.  Meanwhile, well meaning Jerry seems to have accidentally started a rebellion amongst the souls of the damned.

YOU WON’T BELIEVE IT’S NOT BUTTER

Back in the day, when your reviewer worked at a news agency and comic book store, I was an avid Simpsons fan back then as well, taping the shows, watching as the series became a cultural phenomenon.  It was really a great time to be alive – the satire was fun and fresh, and the series was genuinely funny.

The Simpsons made a hit song, and then some genius in marketing thought, wow, what about a Simpson’s comic.  The Simpsons comic hit the market with a resounding crash. I recall that it was extremely popular, especially the first few issues (hey, it was the 90s – everyone and their dog was piling into comics like they were corn futures).  I bought the first issue, read it, and never bought another one again.

The same issue I had with The Simpsons comic is what I’m feeling having read RICK AND MORTY GO TO HELL #3.  It’s very competently done.  It hits most of the beats of its streaming forebear.  The artwork is very good, and some of the dialog is funny and reminiscent of what I love about the show.  The characters are on point, more or less.  But RICK AND MORTY GO TO HELL #3, doesn’t quite live up to the actual viewing experience.

It has to do with the comic format.  Rick and Morty is a lively, anarchic, feverishly inventive series.  Within one episode, the characters are put through the mill in a wide variety of locations.  It never dawdles, or stops to examine its navel too much.  The main characters are always hopping to the next thing, and then the next thing.

RICK AND MORTY GO TO HELL #3 didn’t quite meet my expectations.  The A and B plots all revolve around the same locale.  Rick and Morty spend most of the issue navigating the digestive system of a giant sandworm, which in and of itself is amusingly gross in the way the series can be amusingly gross.  But it lacks that sense that anything could happen the television series has in spades.  And while Jerry’s actions are in character, no one he encounters seems to be suffering enough to want to rise up and take on Hell’s satanic minions.  It all seems boringly suburban.  Which yes, is a type of Hell, but not the take the series would do.

None of this is the fault of the creators.  Within the bounds of the comic book format, writer Ryan Ferrier and artist Costanza Oroza do an excellent job, otherwise, in evoking the television series.  Putting aside my reservations above, Ferrier has the characters down pat.  Their dialogue, their reactions, all fit with what we’ve seen in the series.  Morty’s whining and self doubt leap off the page, and his confession that he ate his goldfish, Fin Diesel, to shut Summer up, is both exactly what Morty would do, and startlingly hilarious.  When Morty breaks out into ‘Amazing Grace’ in memory of his late, lamented (and undoubtedly tasty fish), it instantly reminded me of when former President Barack Obama sang that same song while eulogising the victims of a mass shooting.  It’s that astonishing juxtaposition of Morty’s self involved lament, with a moment of true mourning, that provides RICK AND MORTY GO TO HELL #3s stand out laugh lines.

Costanza Oroza’s artwork evokes the series very well.  The characters are as readily identifiable as what you see on your screens, but this is in no way a copy and paste project.  While the settings may feel same/same, there’s no doubting what the characters are doing and why they are doing it.  My only gripe is that if you’re going to set a story in Hell, make the surroundings more…hellish.

RICK AND MORTY GO TO HELL #3 is a decent stab at transferring the television characters to the printed page.  If the issue had featured more of the series wildly inventive locations and characters, it would’ve been a much more entertaining read.  That said, the writing more or less matches the tone of the show, and there are some genuinely amusing lines, especially from Rick and Morty.  If you love the series, you will like this comic book.

The gang venture into Hell, and spend the issue attempting to either understand their plight, or escape it. Comic book versions of hit television shows have a long and storied history in the field. Some work, some don’t, and some traverse a middle ground. RICK AND MORTY GO TO HELL #3 is in that middle zone - it’s funny, the characters are as you’d expect them, but the lack of variety to events on the page drag it down a little. Still, a fun book to hunt down while you’re waiting for more shows to pop up on your favorite streaming service. And that’s no bad thing.