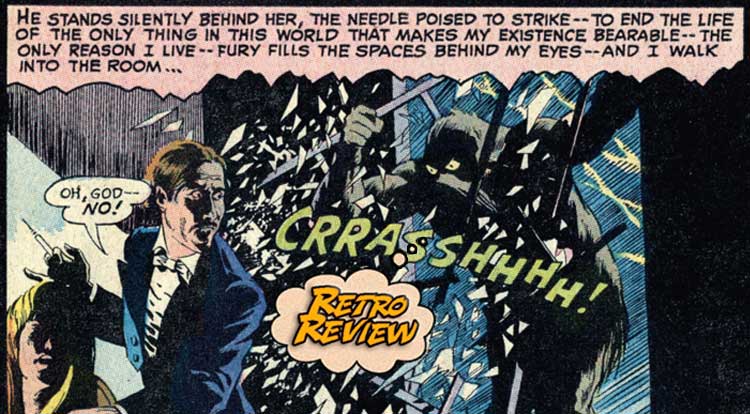 Swamp Thing #1 came out in 1972, but did you know the real first appearance came nearly a year earlier?  Your Major Spoilers (Retro) Review of House of Secrets #92 awaits! Previously in House of Secrets:  One of many DC horror/suspense anthologies of the Silver Age, House of Secrets had occasionally also been the home of off-beat DC superhero characters.  Mark Merlin and Prince Ra-Man (who may or may be the same guy?) debuted in the book’s pages, as did anti-hero Eclipso, but for the most part, House of Secrets was boilerplate anthology stuff.  When it relaunched in 1969, the book added Abel as narrator/host, introducing the various tales from his home in a literal House of Secrets, with a tragic history all its own.  All of that has nothing to do with this issue’s lead story, intoroduced by Abel with a cameo by his brother Cain, engaging in a snipe hunt in the House’s massive attached cemetery, transitioning to our Gothic open. Len Wein is probably best remembered as “the creator of Wolverine” but the lyrical nature of these opening panels should be reminder enough that the man was a truly gifted writer.  The misshapen lumpy thing moves closer to the lights of a house, as the narration switches to second-person and begins speaking directly to one Linda Olsen Ridge, a woman whose newlywed status belies an emptiness inside her. Linda’s husband Damian (an appropriately sinister name) reminds her that Alex Olsen, her first husband, is dead and that it’s time she forgets him, but Linda can’t get past her memories.  Outside her home, the shadowy creature stalks, watching the bizarre domestic drama taking place inside what was once his home. And hey, speaking of talented creators, check out the subtlety of that clenched fist in the final panel of that page.  Berni Wrightson really knew how to convey emotion, and his use of blacks throughout this story is just sublime, making it all feel like a Hammer horror movie, dripping with suspense and unease.  Of course, Damian is up to no good, revealing that he sabotaged Alex’s lab and dragged his not-yet-dead body out into the swamp for an impromptu burial-alive, before swooping into to marry the new widow…

…but now he realizes that the game is unraveling. Damian’s second bout of attempted murder is interrupted by the monster, smashing through the window to crush his hand with the hypodermic still in it and choke the life from him in front of his wife.  The creature turns to her, as if to finish his homicidal rampage, only for the truth to be revealed to the reader.  Sadly, Linda doesn’t get the memo. And in the third-to-last panel, we discover that the Swamp Thing *IS* Alex Olsen, somehow transformed by the explosion and burial into a much-encrusted mockery of a man, shambling away into the swamp.  It’s a really great story from top to bottom, and even the fact that every comics reader knows the twist ending doesn’t spoil the final page reveal and the tragedy of Alex Olsen.  Alex’s story would eventually be roped into continuity with the better-known Alec Holland Swamp Thing (whose series debuted in 1971 based solely on the response to this issue’s lead feature) a few years later, with the reveal that they are both part of a line of Earth elementals, meaning that this is all DC Universe canon.

The rest of the issue features a story written by Jack Kirby with a so-so twist, a truly wonderful bit of dark nonsense from Mary Skrenes with art by Alan Weiss and a mean-spirited two-pager from Dick Dillin and Gerry Conway, the team from Justice League of America, leaving House of Secrets #92 as a very satisfying drive-in movie style experience with an excellent lead feature that earns 5 out of 5 stars overall.  There’s a reason that Swamp Thing has inspired movies, television and toy lines and was a core part not only of Vertigo Comics but the New 52 relaunch in 2011, and the foundation of that is this truly amazing issue.

The lead feature is dead solid perfect, and even the weakest story in this issue ends up being a fun read, making for a truly excellent reading experience.