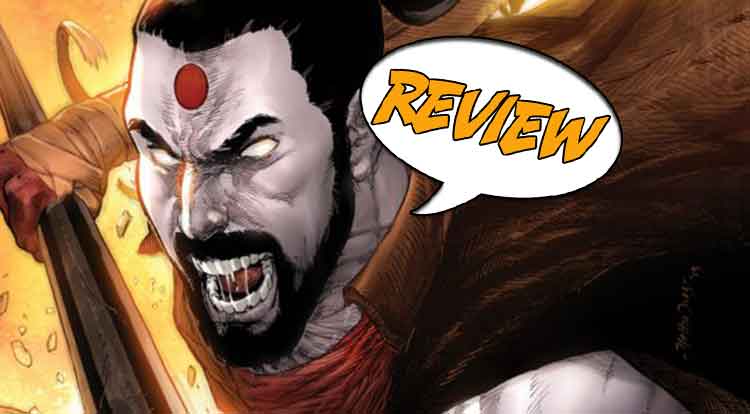 In RAI #6, Rai and Raijin stop by to help a maniple of Roman legionnaires take down an attack by rampaging were-beasts, before spurning the survivor’s hospitality.  Elsewhere, Spylocke dares to infiltrate the AI known as the Bloodfather to understand its plans.  With death at every turn, dare you read this Major Spoilers review? Previously in Rai: Rai and Raijin are on a quest to find the Offspring, a piece of software that should it fall into the Bloodfather’s hands, would make the AI unbeatable.  Along the way, they have taken part in the Battle of Hope Springs, and now face something sinister in the woods.  Elsewhere, in Hinansho Town, tech-savant Spyloche is monitoring the activities of the all powerful AI, Bloodfather…

BEGIN AS YOU MEAN TO FINISH

Dan Abnett has been writing action thrillers for a long, long time, and his experience in the field is on excellent display in RAI #6.  We open on a group of Roman legionnaires marching through a forest during a storm.  Something is amiss, as they stop and prepare for battle.  They form up as creatures out of nightmare burst from the undergrowth and race towards them.  Spears scythe through their ranks, and then it is bloody hand to hand combat, cut short when Rai appears and decimates the attackers.

The storytelling here is economical, with Abnett letting the visuals, mixed with curt orders, tell the story in a propulsive, immersive manner.  The scenes of violence, rendered viscerally by Juan Jose Ryp, tell their own tale, of a world that relies on bloody mayhem to bring order out of chaos.  If like me, you find this sort of storytelling engaging, then RAI is for you.

The character of Rai is your typical man with no name archetype – who does the job that is needed, but doesn’t care overmuch for the chaos he brings with him.  In that sense, having the character of Raijin accompany Rai is a bit of a masterstroke, as he provides the conscience that Rai himself lacks.  For Rai, his overriding reason to exist is to find Offspring – if he has to cut his way through two battling sides to achieve that goal, then so be it.  But he’s not taking sides as such, other than his own.  Raijin, then, is the viewpoint character, someone who asks the questions that need to be asked, whether Rai likes it or not.  This is seen when the Romani survivors host the travelling duo.  Rai wants nothing to do with them – they’re simply wasting his time with talks of feasts and thanks.  It is only because Raijin appeals to him to help the Romani that Rai agrees to at least talk to the beast tribe in the forest, and thus provides RAID#6s thrilling cliffhanger.  Good storytelling like this ensures that it is character more than the plot, that provides the drama and story momentum.  Pure plot has its place, but if you get the characters more involved, it enriches the reading experience.

LEAVE IT ALL ON THE PAGE

Juan Jose Ryp is the hero of RAI #6.  His artwork is nothing short of stunning, from the mayhem he brings to the page, to his adherence to the little details (bulging veins on arms as they swing a weapon, for instance) that tell he is fully invested in the issue.  Rai’s stoicism is more than matched by the maniacal frenzy of the animals leaping at the Roman legionnaires, all the all-in brawl that develops as both sides battle to the death.  The sheer animalistic fury on the beasts as they rush the Roman line is a case in point –  mouths gaping, taloned hands reach, claws tearing up the earth as they rush to fight and die.  His artwork also displays its strengths in the quieter scenes, as he goes about depicting builds and machines and creatures that feel real and lived in on the page.  There’s no stinting on the detail here – from the numbers displayed on Spylocke’s screens, to the decorations that elephant-headed creatures known as Orta’ka wears.

RAI #6 is a thrilling read that starts and ends with a bang, allowing the middle portions to build on the mystery Rai and Spylocke are attempting to unravel.  Whereas Rai alone would be a rather boring, one note figure, his companion Raijin thankfully provides a note of humor and conscience that creates a character with more than one dimension.  The action is unsparing, and the artwork depicting it is fully realised and wonderful to admire.

RAI #6 is an entertaining read that further develops the plot and our understanding of what makes Rai tick. You don’t have to love him to at least admire his monomaniacal desire to get the job done. Elsewhere Spylocke’s investigations further unpeels the mystery surrounding the Bloodfather’s activities, with information uncovered that will provide more fodder for future issues.