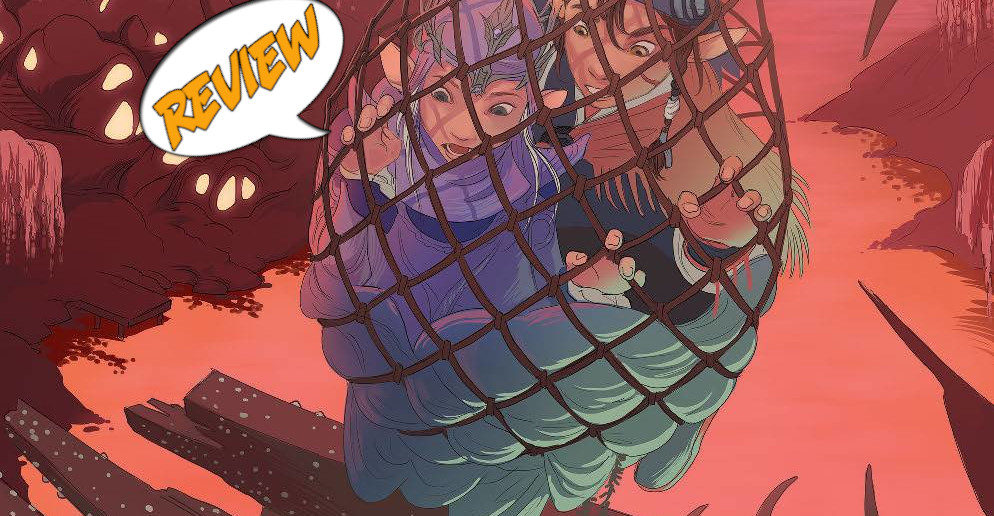 All-Maudra Mayrin has recently taken the crown as leader of the Gelfling people. Her first order of business is to prevent civil war but is attacked by a Sea Monster! Check out if she can bring peace in Dark Crystal: Age of Resistance #10 by BOOM! Studios. Previously on Dark Crystal: The Sifa Clan has been asking for autonomy from the United Gelfling Clans. Newly appointed All-Maudra Mayrin decides to go on a diplomatic mission to see if they can smooth out relations. On the way there they meet Captain Kam’lu and his crew as they escort her across the Silver Sea. On the trip, the ship is attacked by a sea monster and everyone killed except for the All-Maudra and Kam’lu!

IN THE BELLY OF THE WHALE

Kam’lu and Mayrin are stuck on a small raft with no hope of rescue. The All-Maudra wants to look for Dot and the rest of the crew but Kam’lu tries to focus her on their own survival. After a while, they see land and begin to swim towards it! But instead of an island, they find themselves in the mouth of a sea creature. Inside the belly of this creature, they find… Podlings? They enlist the King of these Podlings for help escaping the creature before the submerges into the deep waters. Meanwhile, Fenth gathers the Sifan people to stake their claim to the throne now that the All-Maudra is “dead”.

I know that this is based off a puppet show that is set in a fantasy world. Yet, for some reason I couldn’t suspend my disbelief to see a whale-like creature hold a whole colony of Podlings. I don’t know, I kind of just lost interest as soon as this happened. This doesn’t make the story bad by any means but it made that step from fantasy realism to the absurd. Thematically, we are seeing the All-Maudra connect to different types of people but narratively it didn’t work for me.

The story is quite well drawn. I love the look of Fenth and the Skeksis in this particular arc or maybe I just prefer the sea-faring aesthetic. The stand out image was watching SkekSa sitting at a table and looking at a map. For me, it screamed that they are dark evil creatures that the Gelflings don’t quite realize yet in this particular part of the story. Very cool to see them pulling the strings in this short comic series.

I think the story and world of Dark Crystal is incredibly engaging and allows stories to be told that might be insensitive otherwise. However, I couldn’t get into this issue and the second read through felt like a slog. I am invested in the world to finish out the next two issues but I hope that the story picks up its pacing and engages me a little more. 3 out of 5 stars for Dark Crystal: Age of Resistance #10.

The Dark Crystal: Age of Resistance #10

All-Maudra Mayrin and Kam'lu are stuck in a raft after being attacked by a scary sea monster! They must rush back to land to help smooth over diplomatic relations and prevent a civil war.