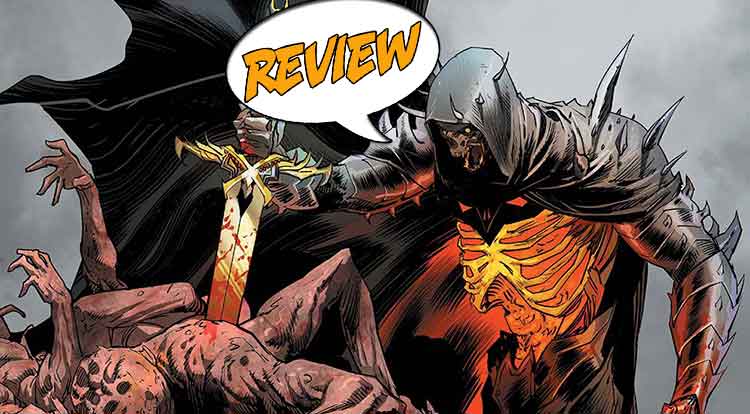 Once and Future #10 Review

Another event is about to happen – and Duncan no longer has a car! What is an intrepid monster hunter to do? Find out in Once & Future #10, from BOOM! Studios. Previously in Once & Future: Beowulf appears on the scene and attacks Duncan and Bridgette, and Duncan crashes his car in an attempt to get free. Beowulf may be bigger and tougher, but Duncan is pretty clever, plus he has Bridgette with him, who blows up the big guy with a mystical landmine. Meanwhile, we learn that Elaine has been working with Merlin, who is manipulating Arthur and messing with the Beowulf story. What is he up to? Duncan drops Bridgette off at her home, and she goes in and meekly tries to blend in with the other residents…for now.

IS THE UNDERLYING STORY GETTING OFF TRACK?

Once & Future #10 opens with Duncan on his phone alternating between looking for his Uber-type ride and calling Bridgette. Rose has just forecast something mystical and big in the area of Bridgette’s Home, where she is watching baking shows and not paying any attention to her phone. (I love the humor in this contrast.) Duncan’s driver cancels on him, and he finds himself forced to do what his grandmother would do – hijacking a cab driver with a gun.

The baking show over, one of the other residents suggests a show discussing the Beowulf manuscript. Suddenly he gets some odd vision changes and worries that he might be having a stroke. Bridgette knows better; something mystical is coming their way, and she urges the residents to bar the door. As she pokes around for a gun or some other weapon, Jack, one of the attendants, comes to check on her and make sure she’s not sneaking away.

After a monster bursts in and starts killing people, Jack soon realizes that Bridgette is more than a tiny, cranky, old lady. She’s busy trying to figure out how to deal with the monster and wondering out loud just what Arthur is up to. She orders Jack – at knifepoint – to hide in a closet for safety, starts her fight, and discovers that this is Grendel.

Duncan, at least as terrified as the driver he’s kidnapped (if not moreso) talks with Rose and decides to let her call the police in for this one. He tries calling Bridgette again, and one of the other residents picks up her phone. She is wonderfully understated, saying that Bridgette has just stepped away for a bit, they’re barricaded in, and there are some scary noises. Meanwhile, Bridgette, who has made her way back inside, asks Trevor, the resident Beowulf expert, just how did Grendel get killed in the original story?

Once & Future #10 opens with a bit of relative normalcy, and it’s really pretty. Duncan is standing on the corner in front of a lovely old church, waiting for his ride that never arrives. To interpose this with a panel showing Bridgette watching TV calmly is so mundane, so much the opposite of the thundering action we’ve seen, that it’s oddly disquieting. I love the various expressions on Duncan’s face as things go from bad to worse for him, and this culminates with his realization, as he hijacks the cab, that he’s acting like Bridgette.

Grendel is another terrific monster to add to the line-up we’ve seen so far. He’s huge and inhuman, with an impossibly fanged mouth dripping blood much like his massive claws. He says he hungers and we do not doubt it for a second. Not a book for the squeamish, he kills people and bites them in half, demonstrating how he has earned his trophy belt of skulls. When the police come upon him and shoot him dozens of times, we see where the bullets all hit, and realize that they don’t seem to be slowing him down in the least.

Once & Future #10 deftly juggles classic folk motifs in a modern horror setting in a delightfully satisfying fashion. We follow the story, loving it as it goes off kilter and gets bigger, and then realizing that it sets us up yet again for a twist.

This time Bridgette tries to stay out of the way – but the monster comes to her!