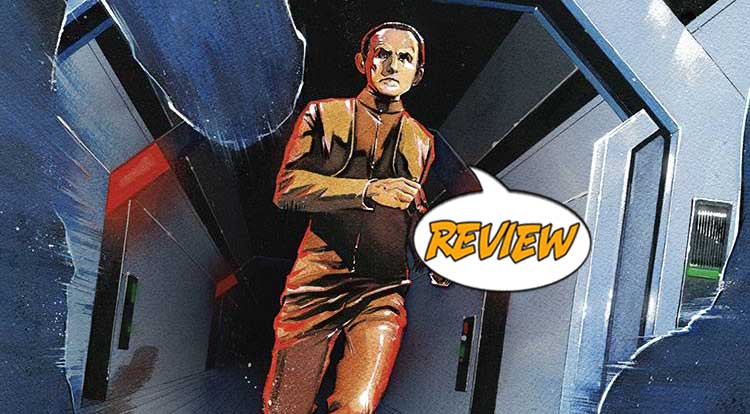 There’s been a murder on Deep Space Nine.  Can Odo solve it before it causes an interstellar war?  Your Major Spoilers review of Star Trek: Deep Space Nine – Too Long A Sacrifice #2 from IDW Publishing awaits! Previously in Star Trek: Deep Space Nine – Too Long A Sacrifice:  With the murderer still on the loose, the inhabitants of Deep Space 9 are starting to divide into factions, made even worse when the Ferengi government gets involved.  To make matters worse, conflict between Constable Odo and the Federation’s hand-picked criminal investigator threatens to derail the investigation itself!

IN THE MIDST OF THE DOMINION WAR

We open with the always-entertaining pairing of Odo and Worf, as they grill Quark about the deaths last issue and the fact that he has a number of the darts used as the murder weapon in his possession.  Before that line of questioning bears fruit, though, there’s an emergency call from Doctor Bashir and another victim, this one a Bajoran functionary.  Links to Garak lead to another fruitless interrogation, but once again, nothing comes of it, leaving both Commander and Constable out in the cold, even after talking to a Bajoran who gives them a little bit of information that might be useful…  right before ANOTHER murder, this time of a group of Ferengi on-board the station for trade negotiations.  This leads the Federation to get involved, and Sisko has to let Odo know that he’s not going to be working alone, leading to the introduction of a Betazoid named Retlaw, who is taking over as primary investigator.

The issue seems to end in mid-sentence, with a very unflattering shot of Odo’s face that underlines my biggest problem with the issue: The art.  It’s good at the likenesses of the characters, but that comes because most of the panels feel like Photoshop-filtered stills from Deep Space 9 episodes.  Garak and Odo get the worst of it, but a couple of shots of Quark in the first half of the book look very lumpy and misshapen, with thick lines painted over pictures of Armin Shimerman in makeup.  The plot is a little bit more successful, but in a very “second act of an episode” way, without much in the way of setup and a few too many complications happening in the pages of the issue.  We do get to check in with the traditional post-Season 3 crew of DS9 (this episode seems to take place within the Dominion War arc) but even that feels a little perfunctory, making sure that the checklist gets filled out.

All in all, while Star Trek: Deep Space Nine – Too Long A Sacrifice #2 does a pretty good job of getting the tone and characters of the piece down, it doesn’t really seem to know what to do with them, instead piling on the murder mystery tropes, with problematic art that misses the mark for me, earning 2 out of 5 stars overall.  I expect that this issue will read better in a collected format, where you don’t have to have the first issue under your belt, nor do you have to wait a month for the next chapter, but as an individual comic book experience, it’s a bit disappointing.

All the right pieces are here, but it doesn't quite come together, thanks to art that feels like filtered photo-reference and a plot that keeps adding twists in a confusing manner... I hope that it reads better when collected.