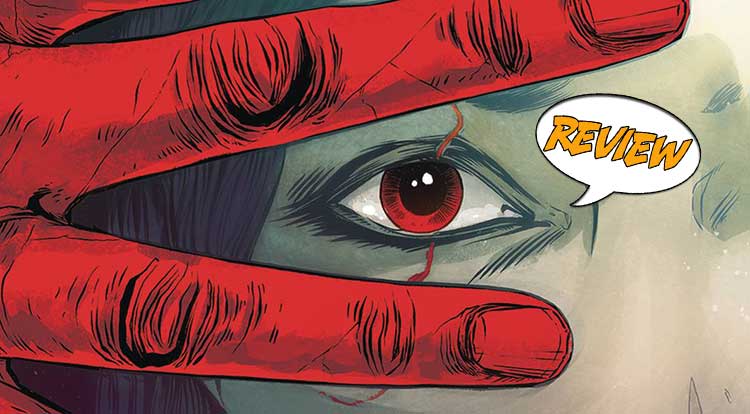 In THE RED MOTHER #7 from BOOM! Studios, Daisy has trouble at work, fulfilling Leland’s impossible demands, and her prosthetic eye is playing up big time.  In an issue where not very much happens, we do see Daisy find a measure of happiness, while in the shadows, something dark and mysterious calls for her.  What is it?   Find out in your next mighty Major Spoilers review! Previously in THE RED MOTHER:  After losing her eye, and partner, to a mugging, Daisy has to pull her shattered life together.  Things go sideways, however, when she starts seeing things, odd things, through her prosthetic eye.  Not only that, but her boss, Leland, is riding her hard on a project.  But a measure of happiness, after the trauma, is on offer from Pari…

I’m not entirely sure much happened in THE RED MOTHER #7, but what did happen was fascinating.  Daisy is under the pump, her hard riding boss Leland pushing her to complete a job at work.  On top of that, she has to cope with the pain her prosthetic eye causes, a pain that is associated with strange visions that haunt her.  While there are no real ghostly happenings in this issue, there are odd moments which link back to her disability, heaping mystery on top of mystery.

A common comment I’ve seen about this series is that it is a slow burn.  That’s never more true than in THE RED MOTHER #7, which opens with an extended chat about graffiti, before moving to more chat at a coffee shop, before Daisy then heads off to work.  It would be as boring as hell in less accomplished hands, but if you’ve stuck with the series to this point, there are rewards for your patience towards the back end of the issue.  Sure, middle class types talking about graffiti and coffee and drafty flats might not necessarily be the most compelling read for some, but THE RED MOTHER #7 does ramp up from the middle of the issue, with some startling results.

I like the main character, Daisy, a lot.  She’s pulled her life, mostly, together, after a shocking assault that left her blind in one eye, and her partner dead.  Her boss is domineering, but she’s strong enough to take it, and give a bit back.  She’s not the sort to put herself in stupid places, and is savvy enough to know her limits.  The other characters in the issue, particularly Leland, are compelling.  We’ve all had bosses who’ve pushed and pushed to get the job done, so Leland is nothing new.  But there’s something attractive and, dare I say it, satanic about him, which makes him an alluring character.  But also very, very dangerous.  His interactions with Daisy are fraught with danger, as either of them could lash out at any moment.

Danny Luckert’s art is the bomb.  Clean lines and realistically drawn characters make the mounting tension and danger all the more apparent.  His panel work and use of angles lifts THE RED MOTHER #7 to a level that makes the reader really appreciate the visual elements of the story.  There’s a dynamism to his scenes that transcends the static imagery, such as when Daisy storms away from her desk, throwing glasses and headphones aside, almost walking out of the panel into the real world.  The panel where Daisy walks into Leland’s office, where her boss is glowering into the middle distance from deepset, sunken eyes, is a masterclass in portraying character through the mix of art and coloring.  And whatever the heck it is Luckert has rendered in that final panel of the last page, it’s pure nightmare fuel, and just the right cliffhanger to bring the issue to an end.

THE RED MOTHER #7 feels a little like the story is in a holding pattern.  There’s some decent dialog between the key characters, but the opening pages spin their wheels a little.  Fortunately, the gears shift and things begin to go sideways as Daisy’s affliction worsens.  By the end of the issue, events are in full swing, with a cliffhanger image you will be staring at open mouthed for a long, long time.

Wonderful art, naturalistic dialog, and appealing characters make THE RED MOTHER #7 an entertaining read. Not much happens, granted, but what does occur is still worth the price of admission. If you’ve come to this series with this issue, I heartily recommend you track down the back issues, to give you more context and appreciation for what Jeremy Haun is doing. For those who’ve been with it from the start, I hope your faith and dedication is being rewarded, because, again, that final panel. Wow!
Boom Studios Danny Luckert ed dukeshire Eric Harburn Jeremy Haun Review The Red Mother
Share. Twitter Facebook Pinterest LinkedIn Tumblr Email
Previous ArticleWayne’s Comics Podcast #447: Interview with Matt Knowles and Steph Cannon
Next Article Retro Review: X-Men #101 (October 1976)