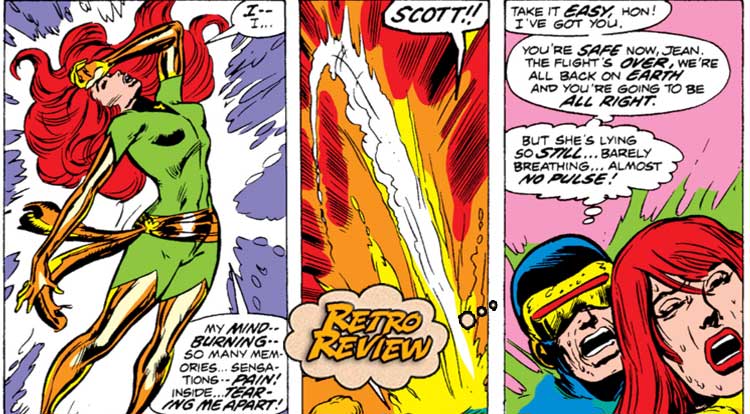 So, I don’t know if you guys knew about this, but…  Jean Grey?  She died this one time…  Your Major Spoilers (Retro) Review of X-Men #101 awaits! Previously in X-Men:  After the X-Men were lost fighting a living island known as Krakoa, a new team of international mutants formed to rescue their predecessors under the command of founding member Cyclops.  After losing a member, the team embarks on a disastrous mission that leaves them stranded in space, with their only chance at survival involving riding a damaged Space Shuttle back down to Earth… at the price of one member’s life! That member is Jean Grey, the former Marvel Girl, who has been exposed to hard radiation and is barely able to keep the craft together long enough to reach a runway.  Unfortunately, sheer momentum carries them out into Jamaica Bay, where the X-Men pop up, one by one, having unbelievably survived the conflagration, all save for Jean.

Then again, she always did like to make an entrance. I’ve said it before and I’ll say it again: NOBODY designs a costume like Dave Cockrum, and this Phoenix design is one of his best.  Before anyone can worry too much about Jean’s new costume and powers, she splashes down again, and the X-Men escape under the telepathic cover of Professor X.  Jean is taken to a local hospital, with Professor X lamenting the fact that his powers are malfunctioning, having nearly killed him getting his team out of JFK unscathed.  Finally, it’s time to find out the secret of the Phoenix, to truly delve into what has happe– With Jean stable and Professor X watching over her, the X-Men set off for Ireland and Banshee’s ancestral home, spending a week sight-seeing before heading off to Cassidy Keep, where it’s Eddie Izzard’s remarks about the United Kingdom prove true: They’ve got a castle each, and Banshee is no exception! That’s not only a pretty gorgeous full-page shot, it’s an amazing use of perspective and vertical space to show off Cockrum’s design chops once more, and I’m totally here for it.  Sadly, Claremont isn’t quite Legendary X-Scribe Chris Claremont yet, as the issue’s back-and-forth whipsaw transitions show us.  As the X-Men approach, they are monitored by a mysterious man in the shadows.  Storm is immediately uncomfortable in the stone enclosure of Cassidy Keep, choosing to soothe her nerves by stripped naked and making it rain in her room.  That… seems rude?  As the heroes assemble for dinner, they’re suddenly surprised by the ol’ giant-trap-door-in-the-floor trick, falling into the clutches of the wicked Black Tom Cassidy, who has been monitoring their every move, which means he’s seen Ororo naked. Oh, and by the sheerest of coincidences, he haa allied with Professor X’s step-brother and long-time X-foe, The Juggernaut!  It’s a moment that is shocking for all the wrong reasons, followed by the cliffhanger moment of Storm completely falling to pieces due to her claustrophobia.  That’s… unfortunately.  All in all, X-Men #101 feels like an oddity but is actually pretty emblematic of 70s Marvel, with plotlines shifting back and forth from the metaphorical front and back burners, transitions that are abrupt and exciting but also kind of nonsensical, with the whole thing held together by Dave Cockrum’s amazing artwork, earning a scattershot (but memorable) 2.5 out of 5 stars overall.  In order to get more about Phoenix, you’ll have to come back in three or four issue, and she won’t actually even join the team for another TEN, but that debut moment is definitely worth the thirty cent cover price.  Whether or not it’s worth the $500 plus for a near-mint copy is likely a moment where mileage varies.

If you're here to learn the secrets of The Phoenix...

...you're gonna have to wait until after the road trip.