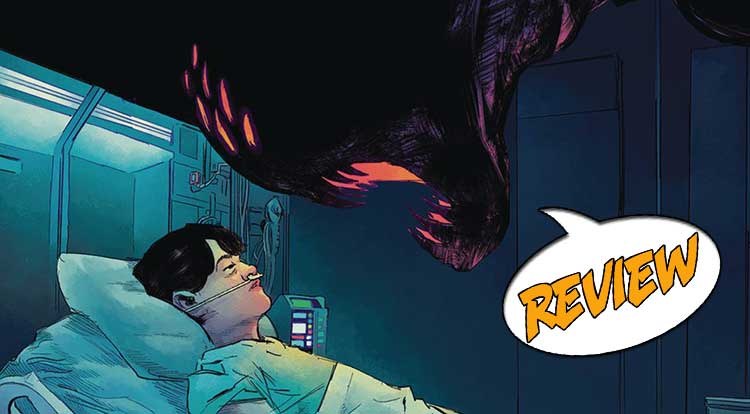 Something is Killing the Children #9 Review

Tommy has discovered monsters frighteningly close to the school. Will his message reach Erica in time for her to do something about them? Find out in Something is Killing the Children #9 from BOOM! Studios. SOMETHING IS KILLING THE CHILDREN #9

Previously in Something is Killing the Children: Aaron (from the House of Slaughter) has come to make sure that loose ends are tied up, and quickly. He reminds Erica that as bait for the monsters, they need to use a child. They go to the police station to pick up Bian. The Deputy overheard their conversation and shows up to keep them from taking her. He tells her of their plan, and Bian gets upset that they want to kill the monster babies because they’re only babies and don’t understand. Erica knocks out Aaron and lets the Deputy take Bian to safety. The Sheriff finds out that Tommy is now able to see the monsters as well, speaking of which, when Tommy goes to the school with his mom to identify his sister’s body, he sees something in the woods that makes him get in touch with Erica!

Something is Killing the Children # 9 opens with a couple brothers in the woods talking as they search for their younger brother. The conversation is so natural, especially since they’re trying to find him before their mom figures out he’s not with them. They see some blood on the ground and examine it as Tommy comes barreling out of the woods, shouting at them to run. One of them has time to blurt out that they’re looking for their brother when one of the monsters kills the other. And then we see them, the babies, circling around Tommy and the remaining child. The pacing of this story, within and between issues, is perfection.

James wakes up in the hospital to Erica’s voice. He has thought she would come to see him sooner. Or never. He’s a perceptive young man, and it has occurred to him that if she did come back, it would probably be terrible for him. Erica chooses to be honest; she does want to use him to hunt the monsters. He had thought her to be a hero, to be invincible, but he knows her to be as scared as he is. And she shares with him her own origin story, her first encounter with monsters and how the House of Slaughter found her – and how the House of Slaughter is barely better than the monsters they hunt. It is at this point that Tommy’s friend runs in to give her the message about the things in the forest by the school.

At the school, the Sheriff and the Coroner have had a long day with body identification when someone comes in to say that one of the families reported hearing odd noises in the forest. As Tommy tries to hold the monsters back, the last brother makes a run for it. By the time Tommy beats off the monster, it is too late. And that’s when the Sheriff shows up.

FROM MUNDANE TO AWFUL

We get a minute to catch our breath as Something is Killing the Children #9 opens. The two brothers, neither of whom has long to survive, are as melodramatic and argumentative as a couple of kids can be. Life is normal for them and they’re acting normal. It sets up a huge contrast for when the horror comes down on them like a bolt out of the blue. The sudden panic when they see Tommy quickly turns to horrified shock when the brother is killed. This kid’s mind is overloaded – when we come back to him later and he runs, it’s dreadful and completely understandable and feels inevitable.

Tommy has aged a lot over the past couple days. Being given the “gift” of seeing the monsters will do that to a person. I respect that despite the absolute awfulness of truly knowing what is there, he is trying his best to rise above it; rather than feel sorry for himself and his family, he wants desperately to do something. I love the determination we see in him as much as I hate how we keep seeing the hope drain from his face. The artist captures the bone-wearying exhaustion of trying to keep up with all that is happening.

BOTTOM LINE: I CAN’T BELIEVE IT KEEPS GETTING WORSE

Something is Killing the Children #9 is a heck of a chapter in an amazing story, for those who are fond of horror. The stakes keep rising, and the problem that almost no one can even see what is going on returns again and again with new ways to cause complications.

Something is Killing the Children #9