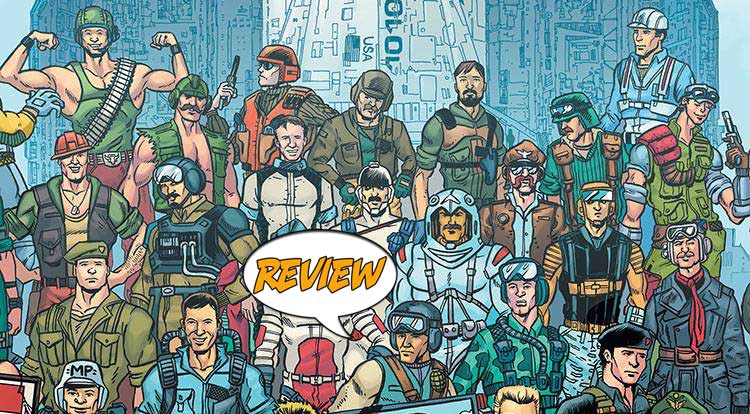 Cobra Commander wants Snake-Eyes for his team…  Not if G.I. Joe has anything to say about it!  Your Major Spoilers review of G.I. Joe: A Real American Hero #273 from IDW Publishing awaits! Previously in G.I. Joe: A Real American Hero:  Cobra Commander wants a Snake Eyes of his own.  The Joes have other ideas. It’ll take two armies to settle this dispute!  It’s all hands on deck, as every member of G.I. Joe is activated for an all-out battle with Cobra’s seemingly endless waves of soldiers.

We open with parachutes doing the same, as a squadron of Joes with paratrooper expertise (Ripcord, Airborne, Torpedo, Tunnel Rat, Wet Suit, Freefall and Lady Jaye) drop into Springfield, aka Cobra-occupied territory.  With the assistance of the Oktober Guard and one really weird pizza delivery guy, they manage to take out a squadron of Cobra Troopers, even taking over their tanks before infiltrating Cobra HQ to find their missing man, Kamakura/Throwdown/one of the Snake-Eyeses.  Across town, the Ninja Force infiltrates Springfield Hospital, while two buses full of Joes bust through the city limits, accompanied by Stalker in, for some reason, a Clown Van.  The team is stunned to find that their allies include not only The Dreadnoks but Destro and his Iron Grenadiers, as battle breaks out across the city.  Under the city, Throwdown breaks free of Cobra Commander before Dr. Mindbender’s mind-conditioning takes hold, and in a satisfying moment, shoots both of them right in the knee.  (It’s very satisfying.)  As all our teams converge on Cobra Headquarters, it becomes clear that the Crimson Guard are ready for their assault.

This arc of the book has been touted as containing every living Joe, and it could easily have been overwhelming, but Hama manages to keep the balance quite well.  There are a couple of Jim-Shooter-Marvel moments where a character lists the names of everyone in his squad, but mostly it moves smoothly from place to place and battle to battle, even making the goofiness of Crystal Ball work in context.  The art is solid as well, allowing people like me who can tell you the difference between Tripwire and Low-Light the ability to do so without distracting people who may not know and just wanna read their comics.  The battle sequences with Sean/Snake-Eyes are particularly well-handled, but the opening parachuting moments are good as well.  I also appreciate Atkins use of facial expression, keeping some of the more expository sequences interesting and even differentiating between Hawk and Duke, who are… pretty much the same guy, in most cases.