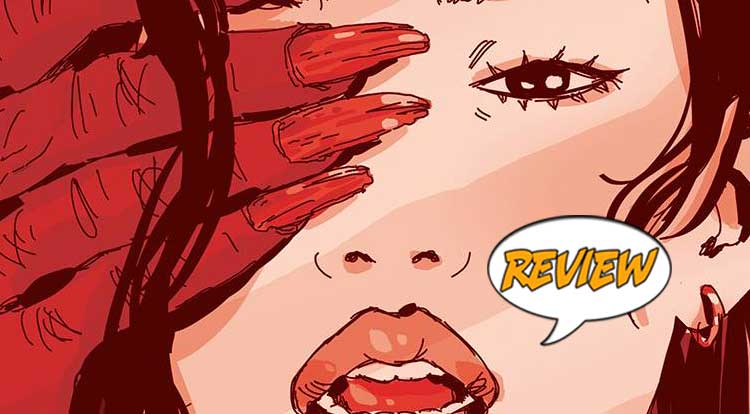 A most unusual art show is about to begin.  Look out for the Devil.  Your Major Spoilers review of Faithless II #2 from Image Comics awaits! Previously in Faithless II:  Faith is drawn to black magic in Turin, Italy, as she exhibits in a prestigious art gallery there.

NOT JUST IN THE DETAILS

We open with an art exhibit, painted entirely in blood, as the mysterious Louis (who is possibly the literal Devil) observes.  His assessment?  “You’re going to be *crucified*…  I’m jealous.”  Faith, the artist in question, catches a plane for Italy, only to find her lover, Poppy, waiting in the car wearing nothing but some champagne and a raincoat.  A remarkably graphic sex scene ensues, followed by a tour of Turin, as Poppy mocks Faith for her discomfort with infidelity (I think?) and they end up on a bridge, where Poppy grasps the railing, only to find that she can’t let go.  She is being held there by a spell, empowered by a homeless woman that they known from New York, followed by a pack of dogs attacking.  Poppy cries out for Faith to do something, and she closes her eyes to find Poppy and the witch gone… and all five dogs dead on the cobblestones.  All that remains is a bloody handprint where her girlfriend had been.

I gotta tell you, this series is 100% disturbing, and even though it’s by design, it makes the book somewhat hard to approach.  The questions surrounding Louis are only part of the impenetrability of the story, as the scene transitions all come quickly and unexpectedly, like a dream narrative.  The use of occultism as a theme makes every page slightly uncomfortable to read, especially if you’re sensitive to depictions of blood.   The sex scenes are also very overtly disconcerting, which makes for a voyeuristic experience, even if the images themselves are all beautiful.  And they are beautiful, as Lloret’s art makes everything somehow soft-edged and razor-sharp at the same time, with a fascinating use of black patches of ink to combine an almost cartoon sensibility with the European aesthetic of Manara and Jordi Bernet.  It’s all gorgeous, even when you want to look away… which is about half the time.

This issue is a very quick read, but one that lends itself to multiple readings, each revealing things you might have missed before, leaving Faithless II #2 as a fascinating look into vampirism, art criticism, sex, death and matters arcane, and even if I don’t feel qualified to fully unpack or analyze is, it is successful enough in it’s presentation to earn 3.5 out of 5 stars overall.  It’s the kind of book that makes me wish I was a better reviewer so that I could more capably recommend it to you, but in the final analysis, I like it, it’s beautiful and it makes my skin crawl.

The visuals are beautiful and the story is nearly impenetrable, making for a book that feels almost as though it wasn't written in English, and yet it all works on a visceral level.