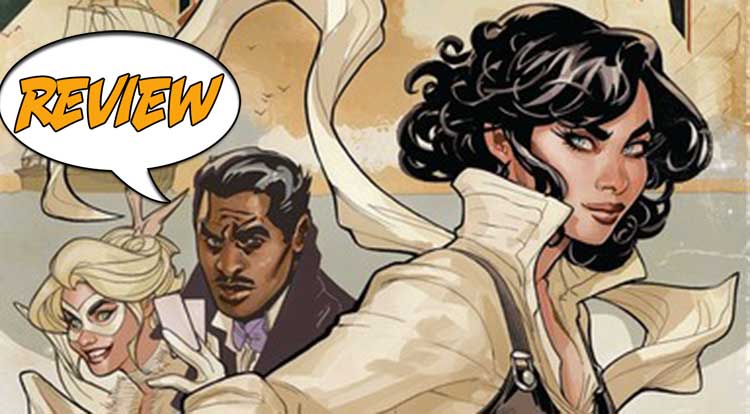 Claire Connell returns to her family several inches taller and able to hear again. What has happened to her, and what does this have to do with bugs? Find out in Adventureman #2, from Image Comics!

Previously in Adventureman: Ever since Claire Connell and her son Tommy found that new Adventureman book, strange things have been happening. To satisfy her curiosity, Claire goes to the address that was in the book and sees an incredible Art Deco style skyscraper that didn’t used to be there. She seems to be the only person around who sees it. She walks in and finds herself in Adventureman’s secret headquarters, works her way around some security robots, gets to the elevator, and remembers the secret password that gets her inside!

WHAT HAS HAPPENED TO CLAIRE?

Adventureman #3 opens on Claire with some of her sisters shortly after her arrival at the family Shabat dinner, her hair rumpled, her clothing torn, and her face beaming. They think there’s something wrong with her and take her to the local ER to be examined. She has removed her hearing aids, but she can actually hear (for the first time in years). In fact, her hearing is so good she realizes a policeman friend of hers has come into the hospital with his wounded partner who was hit by a train after a weird incident with bugs – a theme we’ve seen before.

Claire dashes off to them, and the narrative cuts to her experiencing an Adventureman story in first person, which takes place on board a pirate ship. Hang on; this does tie back in. Adventureman saves a woman’s life with a quick blood transfusion, and when Claire comes back to herself in the present day, she has just given an emergency transfusion of her own blood to the dying cop, and it stabilizes him.

Claire’s family are stunned. The weirdness isn’t over yet. She’s grown significantly taller virtually overnight. An MRI of her brain shows all sorts of unusual activity. And she doesn’t remember what happened to her after she found the building. Otherwise, she seems healthy and is released back home. On the way, Tommy finds text messages from her he doesn’t remember seeing, and she doesn’t remember sending. But when she shows them to her father, he sees only a blank screen.

The final scene with Baron and Baroness Bizarre in their hideout (possibly the Adventureman headquarters?) is a little confusing. Does this hurt the story? Not really – we know they have Phaedra Phantom imprisoned. It turns out they’re working to empower a demonic-looking beast-god named Abbathexiddion, who seems to be the source of all the mysterious bugs. He also appears to have his own plot rolling along – with or without their help.

Such care is taken with the characters in Adventureman #3. Everyone down to incidental people in the ER is expressive. They look like real people. They aren’t all drawn from the same template. It makes the world feel more than lively; it makes it feel lived in. That energy carries over to the scene on the pirate ship where Claire finds herself in the role of Adventureman. (Thankfully for our sake, we see Claire the whole time.) The action is more pulp in that scene, but the care taken with the characters leads us seamlessly back to the present day.

The scene with the Baron and Baroness is also compelling. I like the dramatic scenery and I like the Baron’s over-the-top costume. The appearance of Abbathexiddion is abrupt, which heightens the surprise, even though he is foreshadowed with the appearance of more flies. The colors are more muted, which makes it feel like they aren’t quite on the same plane as the real world. There is also some clever lettering, using a very standard typeface which makes it feel like it’s part of an Adventureman story, yet part something that is actually going on behind the scenes.

Adventureman #3 is big and bold. It doesn’t explain everything to us, but it shows us the high points and fitting the pieces together brings us into the adventure. The dramatic tension of a likable, though not experienced, heroine against an unexpectedly powerful foe whets the appetite for the next issue.