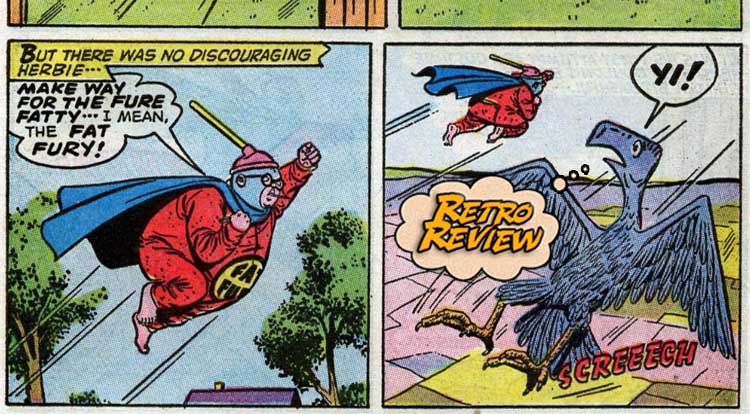 He’s famously Alan Moore’s favorite superhero…  but who is The Fat Fury and how did he come to be?  Your Major Spoilers (Retro) Review of Herbie #8 awaits! Previously in Herbie:  After his pacifier was stolen as a child, Herbie Popnecker was given a lollipop instead.  Becoming fond of the treats, Herbie grew into a slow-moving, terse young man who was mocked not only by his peers but by his cruel, judgmental father.  The lollipops, however, were a gift from a mysterious being called The Unknown, and gave him incredible superhuman abilities that he used in secret.  By the time of this issue, he had already thwarted ghosts, criminals, alien invasions and an actual ancient deity, all without seeking any kind of glory.  Then, a criminal called Mr. Horrible robs Herbie’s home… That final panel is the first of several cameo appearances by the Golden Age Skyman, a long-lost hero created by Ogden Whitney twenty years earlier, by the way.  The superhuman prowess of Mr. Horrible allows him to rampage across the city, stealing parked cars with his bare hands and slapping away police interceptors, but the direct question of then-President Johnson convinces our “Little Fat Nothing” that he’s the man to take down the monster.  Thus, he enrolls in The American Hero School to learn how to use his existing lollipop powers to the maximum! Herbie’s lack of traditional hero skills is profound, leading to himi washing out of Hero School, but when his former classmates graduate and STILL get slapped down by Mr. Horrible, he realizes that, license or no license, he has to act and act fast.  First, a costume! There’s a joyful cartoonish nonsense to Whitney’s sixties work that I love, especially during this montage of costume changes, but it’s the toilet plunger on the head that makes the whole thing really sing.  Leaping out the window, The Fat Fury flies to New York to protect the Statue of Liberty from Mr. Horrible’s giant-strength.

He is immediately slapped away with a single swat, which doesn’t sit well with our hero. The inventive goofiness of the back-and-forth battle fills me with joy, as it feels like a perfect parody of every Silver Age super-fight, with the back-and-forths being balances with Herbie’s Bugs-Bunny-like body of putty.  Finally tiring of the battle, The Fat Fury borrows the Liberty’s torch for the ol’ one-two! Having had his power bested by a tween, Mr. Horrible surrenders to police, leaving a very dizzy Herbie to head for home, where his father once again unknowingly disrespects the boy who is humanity’s savior.  For my money, Herbie #8 is the point where the abject silliness of Herbie really hits its peak, with the later formation of the Three Musketeers (a super-team featuring ACG’s other supers, all of whom have nigh-unlimited mystical powers) as a cherry on top of the sundae, with a script that celebrates and lampoons everything we love about comics in equal parts, and inventive art coming together for an amazing 4.5 out of 5 stars overall.  If you’ve ever wondered why I love this guy so much, this issue should serve as your gateway to the wonder of The Fat Fury.

Hughes and Whitney somehow manage to encapsulate, parody and perfect the superhero genre all at once, and it's well-worth the trouble you'll have tracking down this issue.