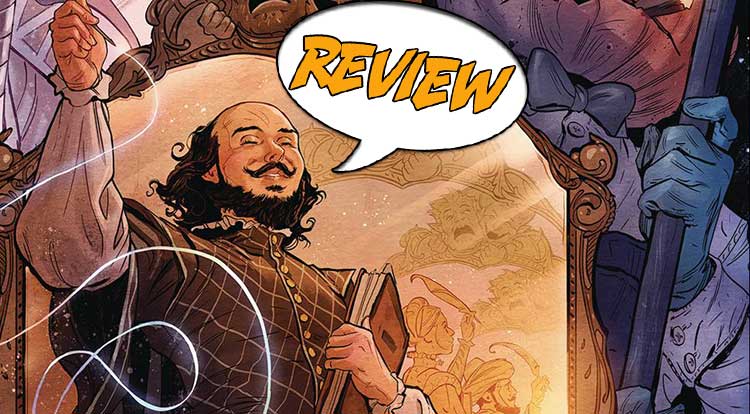 A new nightmare is wreaking havoc, a woman is trapped in her dreams, and a whole bunch of William Shakespeares are hanging about, but what do you expect with The Dreaming? Your Major Spoilers review of The Dreaming: Waking Hours #1 from DC Comics, awaits! Previously in The Dreaming: Waking Hours: Shakespearean scholar (and exhausted new mother) Lindy has dreamed of Ruin…and in the process, she’s delivered him unto the waking world.

What Dreams May Come

The DreamingL Waking Hours #1 opens up with Lindy inside a dreamworld where she’s in a house of stairs that lead nowhere.  As she reaches the end of a staircase she’s awoken by her baby crying. Later she’s speaking with her academic advisor about her dissertation about William Shakespeare and the meeting doesn’t go well.  Back in the same dream as before, Lindy is surprised by someone else walking the steps of the house.  She confronts him and it turns out to be Ruin, a nightmare who’s trying to escape The Dreaming.  He accidentally startles Lindy which traps her inside the dream but kicks him out into her bedroom, with her baby. Back inside the dream, Lindy now finds herself in William Shakespeare’s house, except it’s not just him, but all the versions of him that have been theorized to exist over the years.  In the real world, Ruin seeks out help with the baby.

What Wilson Does Best

One of the things I’ve long appreciated about G. Willow Wilson’s writing is her ability to include topics like motherhood, unjust social structure, and personal fallibility, without sacrificing fun but while also not downplaying those themes either.  The characters in this issue aren’t being crushed and ground into dust by the things around and within them.  For example, Lindy appears to be a single mother with money issues who’s also balancing a scholastic life, but she doesn’t breakdown in some dramatic way, but I also never get the impression that these things aren’t bothering her.  What helps keep this issue enjoyable is the inclusion of the Shakespeare plot.  The multiple Shakespeares playfully quipping at each other is an immediately enjoyable sight.

The art in The Dreaming: Waking Hours #1 wasn’t what I was expecting.  A lot of times there seems to be a penchant to go over the top with surrealist imagery and a lot of distracting swirls and wisps whenever a comic deals with dreams.  Yet, here we have a more subdued approach.  The art team lets the content of the panel inform the reader that what they’re seeing is a dream, not superficial additions. My only complaint with the art is the look of Ruin.  There’s nothing glaringly bad about his design, he just has that pale, dark haired, handsome, androgynous look that seems to pop up a lot with Sandman adjacent titles and it would’ve been nice to have something more striking, especially considering he’s supposed to be a nightmare.

The Dreaming: Waking Hours #1 makes a good first impression by introducing a handful of likeable characters then immediately throwing them into fun situations.  What’s also nice is that this doesn’t feel so tied to the rest of what’s been going on with The Sandman Universe that a reader would feel put off or lost in what’s going on. 4.5 out of 5 stars.