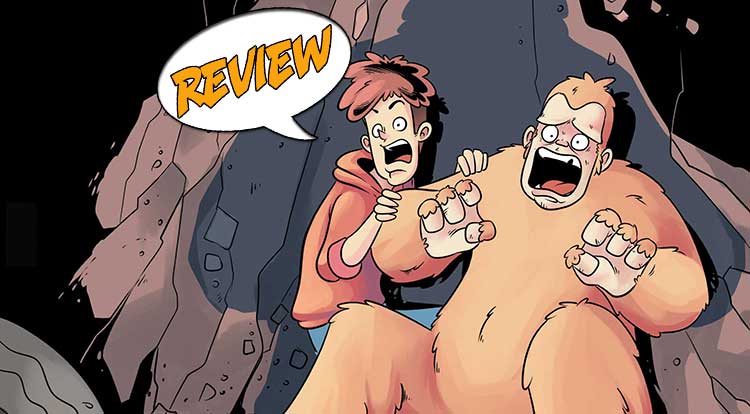 Holden the Sasquatch has fallen in love, but secretly. Can he come out in the open, and will this change his bachelor lifestyle? Find out in Sasquatch in Love #2 from Action Lab Entertainment! Previously in Sasquatch in Love: Who knew that Cooper’s Pines would have such turmoil beneath the surface? Veterinarian Felix Bitterman moved there after a break-up (and he’s still stalking his ex). He has made friends with Holden, the last living Sasquatch, and a remarkably cultured fellow. Doctor Vogel, a Sasquatchologist, comes to town seeking traces of the elusive beast while Grace, a newly graduated film student, has desperately taken the job of documenting his exploits. And then Holden sees Grace and immediately falls in love.

Cooper’s Pines is home to other frustrated young people, as we find out in Sasquatch in Love #2. Sheriff Judy Popowski always wanted to be a park ranger, but family tradition insisted she take up the mantle of local law enforcement. Not much exciting happens around here, or so she thinks as talks with Dr. Vogel about his vandalized van. But her park ranger instincts kick in when she spots some curious tracks leading into the woods, and she follows them.

At his camper deep in the woods, Holden reflects on his exploits. Like any romantic, he wonders how Grace will feel about his poem. As he sips his coffee, he looks out the window and finds himself face to face with another Sasquatch – the real deal; not Dr. Vogel playing dress-up. They’re both startled and the newcomer runs away. As Holden chases after, Sheriff Judy comes on the scene and investigates the camper, finding it to be the hideaway of the nefarious library thief. Holden comes back and THEY both startle each other. Holden is the first one to talk; Judy realizes this, and they have a delightful conversation. At least they do right up to the point where Judy lectures him about stealing library books and vandalizing vans. But she is willing to not say anything about him, as long as he pays for the van repairs.

Then she has to get back to town for the Waffle Festival (I love this concept), and in a very sweet moment, she asks Holden if he’s going. When he says not, she tells him he doesn’t need to be ashamed of what he looks like.

Felix arrives at the clinic and finds that someone dropped off a gift for him – a burger and a note to “Secret Admirer” saying that she’s not interested. As he wonders about this, Holden calls in a panic asking him to come out to his place. Holden is determined to track the other Sasquatch and he wants Felix to keep him company. They find the other Sasquatch and Holden realizes she’s female. Felix encourages him to talk to her, advice which quickly derails into moping about his ex. But Holden tries it anyway. She seems to like him, he explains that he’s in love with someone else, and she conks him on the head and carries him off to her cave. I was not expecting this. It’s a twist on the trope for sure.

A panicked Felix calls Judy and tells her the crazy story. She hangs up on him. Felix braves the cave to try to rescue Holden, who makes him try to reason with the Sasquatch when she returns. Sheriff Judy rescues both of them, and she and Felix head for the Waffle Festival. There, Felix runs into Grace, who still thinks he wrote the poetry. It turns out that she, too, is getting over an ex of her own. They talk a little, and Holden, who is watching from afar, sees them and gets a twinge of jealousy…

THE FUN OF COMPLICATIONS

Sasquatch in Love #2 is a sweet, goofy book which actually has some things to say. The characters are drawn with enough energy and humor that it makes them more fun. The facial expression are comedic and lively. The sequence when Holden first sees the female Sasquatch is a case in point. His morning looks pretty normal. He stretches, he brushes his teeth; his face looks like he’s not quite awake yet. He gets his first cup of coffee, looks out at the beautiful outdoors and it takes a second for his brain to kick in and he does a perfect spit-take.

The art is loose and breezy, a style which helps carry the story along. I like how Felix and Holden both have a tendency to get a little overwrought under stress. Putting the two of them together is genuinely humorous. I like that threaded in through the rom-com is a discussion on how it’s fine to be yourself, that you shouldn’t be ashamed or feel like you don’t belong. It helps that this comes from characters who believe it, so it comes across as heartfelt.

I was afraid that this book would lean into tropes too heavily, but Sasquatch in Love #2 has begun to blossom into a charming story with a cast of wacky characters who are more than stereotypes. Felix may be mooning over his ex too much, but Holden is pretty likable.