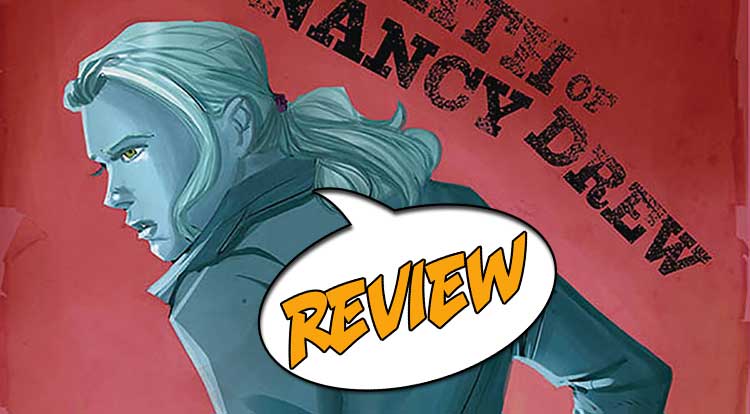 Nancy Drew and The Hardy Boys: The Death of Nancy Drew #3 Review

Is the Syndicate still active? Can Nancy, Frank, and Joe get to them before they take Nancy out for real? Find out in Nancy Drew & the Hardy Boys: The Death of Nancy Drew #3 from Dynamite Entertainment!

NANCY DREW & THE HARDY BOYS: THE DEATH OF NANCY DREW #3

Previously in Nancy Drew & the Hardy Boys: The Death of Nancy Drew: It turns out that Nancy is not so much dead as pretending to be so she can dig further into the Syndicate. Frank has been helping her all along, which leaves Joe cross at both of them. She is also trying to figure out who killed Jeannie, the coroner’s sister. A little detective work reveals that Jeannie and Lonnie got a big bank deposit shortly before the accident that killed the young woman, and that the money was from the Syndicate. They also dig up another lead. A criminal accountant called the Barber worked with the Syndicate, and the trio try to meet up with him, only to find themselves in the crosshairs!

Nancy Drew & the Hardy Boys: The Death of Nancy Drew #3 opens with Frank reminiscing. He had had a huge crush on Nancy and was working on getting over it when she called, and it drew him back in. His inner dialogue blames Nancy for getting him to do stuff he wouldn’t want to do. This leads to the present, where Frank and Joe give the unconscious Barber a quick search and then flee to the roof just before the police show up. I don’t think Nancy needs to be set up as some kind of femme fatale, and I’m disappointed that Frank blames her for things he’s chosen to do. To have him warring with his own conscience about this would be more interesting.

At any rate, the police arrive. They find blood on the ground, but the Barber isn’t there. In those few intervening minutes, he went inside the building and up to the roof where he draws a knife, gets into a fight with the young people, cuts off Frank’s ear, and runs off. Frank gallantly sends Nancy and Joe to run after the Barber. There’s a long hospital scene where a contrite Nancy confesses her love to Frank as he’s being put under, and this comes back around only as something to be ignored/denied later. Thankfully, the police chief also shows up, and officially ties the Barber in with the Syndicate.

The detectives did manage to get a couple flip phones off the Barber, and one of them has a message about the “target” being at the press conference. Fortunately for our plot, Mayor Ned Nickerson is having a press conference about the Chinese company Jinzhan who has agreed to build a factory in River Heights. Off they head, looking for whoever might be a target in a crowd of hundreds. Nancy spots Mary Bobbsey with Carson Drew, which distracts her. But Joe spots the Barber backstage. He tackles the Barber, who elbows him in the head, knocking him down. The Barber runs off and Frank takes over. As Ned talks, there’s a big fight with the Barber until the police shoot him and kill him.

Nancy runs off to stay hidden and do a little more investigating. Frank and Joe meet up with her later. She has traced another number from the Barber’s phone. Does it lead to the new head of the Syndicate?

The art of Nancy Drew & the Hardy Boys: The Death of Nancy Drew #3 is solid. There are some dramatic moments in it such as right after the detectives climb to the roof of the building. It’s dark up there, they’re sneaking around and silhouetted against the sky. Below them, the police investigate by flashlight, which projects some cool shadows. The brief fight with the Barber is dramatic, heightened when the police shine a spotlight up at him. There continues to be some cool play of light and shadow in the art.

This is picked up again near the end in the other fight with the Barber. I’m not exactly sure where they are where they are so beautifully silhouetted (and where the crowd doesn’t seem to be able to see them). It’s a lovely fight, hampered in clarity only by the book’s nod to realism. Nancy and Frank have their hoods up so they won’t easily be recognized, which makes perfect sense. But when we see the silhouettes, it’s impossible to tell if it’s only the Barber and Frank fighting, or whether Nancy is helping, as I assume she is because she’s right there after he’s shot.

Nancy Drew & the Hardy Boys: The Death of Nancy Drew #3 does move the plot along further. The plot logic is starting to feel less securely connected, and I don’t think the overlay of a love triangle adds anything to the story. There are some good serious elements here, and there is just enough action to keep the plot alive.

The Death of Nancy Drew #3