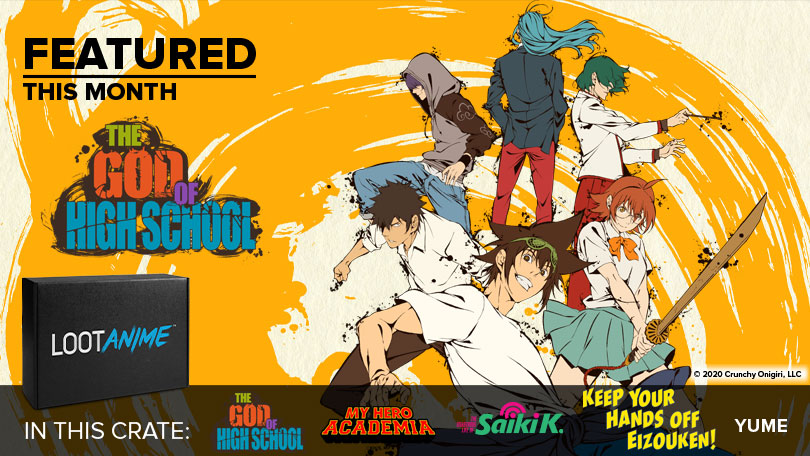 Crunchyroll, the world’s most popular anime brand with more than 3 million subscribers and 70 million registered users, announced today a partnership with Loot Crate, the worldwide leader in subscription boxes, to bring fans more from their favorite anime. “In addition to the exclusive Crunchyroll swag you can currently find in the Loot Anime crates, we’re collaborating with the Loot Crate team on two very special crates for our community that will be available before the end of the year,” said John Leonhardt, Head of Consumer Products, Crunchyroll. “This partnership with Loot Crate will provide yet another way for the global anime community to enjoy their favorite series, and we can’t wait to show our fans what we have in the works.”

Crunchyroll is currently curating special items for monthly Loot Anime boxes. The August crate, which is available now and has been tremendously well-received from fans, includes an exclusive t-shirt from the hit Crunchyroll Original series “The God of High School.”

Additional details on the partnership will be announced at Virtual Crunchyroll Expo, a digital take on Crunchyroll’s yearly flagship convention that brings together the anime community to celebrate the best and brightest in Japanese animation. The event will be streaming from September 4-6 only on crunchyrollexpo.com. Fans are encouraged to register for free now to stay tuned for the latest from Loot Crate and Crunchyroll!

Crunchyroll has the world’s largest collection of anime, with more than 1,000 titles and 30,000 episodes. The Crunchyroll consumer products team currently manages merchandising rights for more than 350 anime titles, working with more than 100 global licensees to provide anime fans with the best lifestyle, fashion, and home goods products from their favorite series.

About Crunchyroll
Crunchyroll, a WarnerMedia company and the world’s most popular anime brand, connects anime and manga fans across 200+ countries and territories with 360-degree experiences.

About the Loot Company
The Loot Company™ is a leading subscription eCommerce service for fans of pop culture, video games, anime, and more. The Loot Company collaborates with global entertainment properties to help audiences discover their favorite products. With over 20 premium consumer product lines in themed and limited-edition crates, as well as crowdfunded Loot Launcher exclusives, fandom is delivered directly to subscribers’ doorsteps. Loot Crate was acquired by the Loot Company in 2019 and is supported by the heart of a diverse subscriber community affectionately known as Looters. The Loot Company is a wholly-owned subsidiary of Money Chest LLC, with sister brands including NECA, Kidrobot and WizKids. To sign up for a Loot Company subscription, visit www.lootcrate.com.
Facebook: facebook.com/lootcrate/
Twitter: @lootcrate
Instagram: @lootcrate