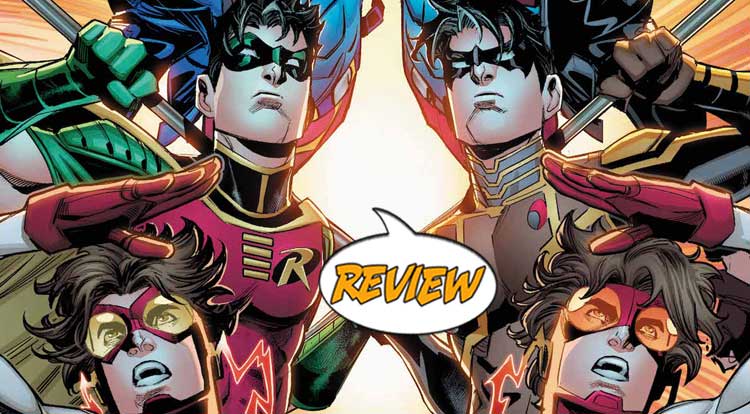 The threat of S.T.A.R. Labs has been put to rest… but can the founding members of Young Justice be friends once again? Your Major Spoilers review of Young Justice #17 from DC Comics awaits! Previously in Young Justice: As younger men, three iconic heroes built Young Justice on their friendship. Now their dream has grown and changed as much as they have. And with the demands of adulthood pulling them in different directions, Superboy, Impulse and Drake realize that nights like this one may never happen again.

So, where do they go from here?

We pick up immediately after the battle royale seen in recent issues of Action Comics, where Lex Luthor and his cronies attacked the Justice League and Young Justice, with a young woman named Yolanda. She and her father are providing support for the cleanup, bringing food and water to those helping to put things back together… including the superheroes. She’s quickly welcomed by Impulse (who is hungry) and Drake (who is not), and ends up witnessing a number of important conversations. Wonder Girl and her “Auntie Diana” discuss Zeus, Superboy and Drake are amazed that Superman is going to help his clone, The Flash and Impulse have a super-speed family reunion and everyone marvels at Superboy’s takedown of Apex Lex Luthor. We get a few moments with each of the YJ members, with Naomi heading home to deal with her panicky dad, Ginny Hex drooling over Wonder Woman and Superboy departing with Superman to try and unravel the conundrum of his continued existence.

A *LOT* OF TALKING

The real down side of this issue comes in just HOW MUCH talking there is to be had, and how little in the way of incident. It’s a story that literally takes place in a couple of hours, tops, and there’s nothing happening besides cleanup efforts, so even a moment where Batman and Drake have an inaudible conversation doesn’t really feel all that crucial. Clearly, the intention is to show that the team has been accepted by the Justice League and that the myriad questions are going to start being answered, but even that is left for another day. Nearly a whole page is devoted to Tim and Connor talking about talking to the Man of Steel, with side conversations galore and a HUGE cast of characters flitting in and out of focus. Godlewski’s art makes it as interesting as possible, varying the framing and storytelling, even using Bart and Barry’s conversation to get in something akin to an action sequence at super-speed, but at the end, it feels like the post-mortem conversation issue that we’ve seen so many times in Bendis’ previous work.

On the one hand, there are a lot of YJ threads that needed to be addressed and a lot of characters to play with, but Young Justice #17 feels less like an organic chapter of the ongoing narrative than it does a bottle episode without any real effect on that narrative, with good art that still can’t quite overcome the talkiness of the script, earning 3 out of 5 stars overall. I enjoy this comic book and I expect to return for next issue, but this one is more than a little disappointing.