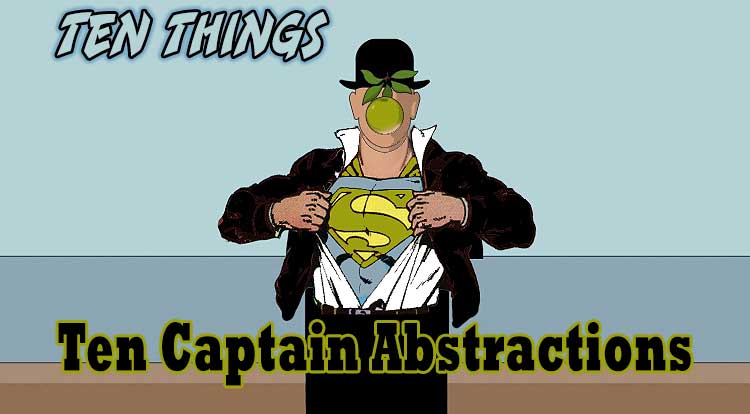 There have been a lot of super-types in the the years since The Scarlet Pimpernel, and not all of them can represent something physical. Welcome to Ten Things: Ten Captain Abstractions!

Whooshman-Bicarbonate Films, in conjunction with An Amateur Comics Historian andthings that are hard to explain, but you’ll know them when you see them, Presents: A museum creator by trade, Clive Arno was a sort of proto-Indiana Jones, digging through the ruins of lost civilizations for historical artifacts. On one such dig, he found a number of ancient coins, empowered by lost deities, that gave him super-powers when carried. Arno’s resulting super-career included an encounter with Superman himself, battles with the evil Krellik (that’s Killer-K spelled backwards) and blue-skinned monster-man Doctor Evil. Though his late-sixties DC run was brief, it was remarkable, with art by Wally Wood and Gil Kane and writing by Kane and a young Jim Shooter.

And yes, he’s based on the action figure. The son of a legendary Golden Age hero, Joey Pike’s adventures were slathered in testosterone both in the usual senseless fighty-fighty way, but also in that they were sexually explicit, appearing in the pages of ‘Penthouse Comics.’ He encountered not only his dad’s old enemies, but his old lady friends, and had a very uncomfortable interaction with his own half-sister that, thankfully, didn’t go where we’re all worried that it might. He’s one of the few heroes of that short-lived line who wasn’t absolutely insufferable all the time.

It was usually a fifty/fifty shot of him being insufferable in any given issue. A newspaper publisher in New York and/or Central City (depending on the writer), Don Wright donned tights to fight for the underprivileged and downtrodden. He fought the good fight for a little more than thirty issues circa 1941, occasionally teaming up with the higher-profile Black Cat. He debuted with the ability to fly and an undefined degree of super-strength, but both quickly disappeared, leaving him as another two-fisted, star-spangled hero in the mold of The Shield. Hailing from Earth-138 in the Marvel Comics firmament, Karl Morgenthau is an ally of Hobie Brown, the Spider-Man sometimes known as Spider-Punk. Somehow, his likeness rights are owned by the quasi-villainous Kang the Conglomerator, who reports that his uniform was quite well-received by the general public. He is one of very few heroes named Karl. An ultra-righteous fundamentalist, Bob Jones IV was chosen by the American Purity Foundation to be transformed into an anti-smut crusader. He gained superhuman strength and speed enough to take on She-Hulk in hand-to-hand combat, but it’s unknown if there’s ACTUALLY a stick up his butt. He can also fire bursts of plasma from the heart emblem on his chest, making it the rare chest symbol to be actually useful. The size of his cape, boots and gloves makes his uniform feel really imbalanced, making his inevitable defeat more satisfying. An interstellar police officer who is implicitly the son of Orion of the New Gods, Captain Victory cruises the galaxy with his forces, the Galaxy Rangers. A creation of Jack Kirby, he appeared sporadically throughout the 80s and 90s before being swept into ‘The Kirbyverse’, a shared universe of Kirby’s independent comic creations. In addition to being a stalwart leader, marksman and tactician, Captain Victory has a degree of super-strength. Appearing once in 1945 (with a probably-illegal reprint sometime in the fifties), this teen hero’s costume concept seems to be “What if D’Artagnon was a Chippendale dancer?” Secretly Ken Elliot, his adventure features everyone who lives in his apartment building being evicted, with a plot thread about stealing tungsten, which is key to the war efforts or something. It’s quite hard to follow, even by the standards of the time. Captain Truth can fly and may have a degree of superhuman strength. A high-school chemistry teacher, Professor Jeff Jordan was working on a special formula to increase his strength and durability a hundredfold. Thanks to an accident, he and a student named Tim inhaled the Wonder Formula, making them both into superhumans and allowing them to punch crime, spies and fifth columnists. Captain Wonder was one of twelve heroes who were placed in suspended animation in 1945, only to awaken in the present day and have to deal with a new century. He was badly wounded in battle with another of The Twelve, but was last seen still protecting innocents with his disfigured face covered by a golden mask. After the death of his twin brother Michael was killed testing an experimental aircraft, nebbishy writer Lance Gallant was visited by his ghost, who offered him a unique deal: Whenever Lance rubbed his t-shaped birthmark, Michael would co-inhabit his body, giving him super-strength, flight and other powers, including invisibility. Depending on the continuity, Captain Triumph may have retired, become a murderer or died in combat, but was last seen in the company of Harley Quinn, having been thrust forward into the present day.

The leader and Red Ranger of Kaizoku Sentai Gokaiger, he is an unusual example as his superhero identity is actually called Gokai Red, with Captain Marvelous being the closest thing he has to a real name. Known as Mr. Marvelous or just plain Marvelous (with recurring frenemy Basco ta Jolokia. calling him “Marvy-chan”), he has made a lifetime out of collecting the Ranger Keys of power in the hopes of unlocking the greatest treasure in the universe. He learned an appreciation for planet Earth and the traditions of Super Sentai along the way, but did it all with incredible hair.

This week’s topic, Ten Captain Abstractions, could have only come from my head, but feel free to follow along @MightyKingCobra to suggest your own. There’s always more Ten Things madness on Twitter or check out the full Twitter archive here! As with any set of like items, these aren’t meant to be hard and fast or absolutely complete, if only because we’re less than a year or two from Captain Ennui battling the evil plans of Doctor Tsuris. Either way, the comments section is below for just such an emergency, but, as always: Please, no wagering!