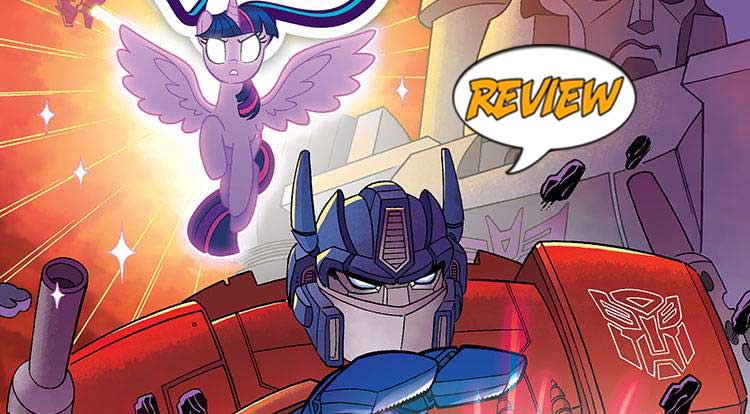 My Little Pony/Transformers: Friendship In Disguise #1 (of 4) Review

Ponies and robots and space bridges…  Can I get an “Oh, my!”  Your Major Spoilers review of My Little Pony/Transformers: Friendship In Disguise #1 from IDW Publishing awaits!

Previously in My Little Pony/Transformers: Friendship In Disguise:  When Queen Chrysalis casts a spell looking for more changelings, she accidentally interferes with a malfunctioning Spacebridge!  What’s this mean for our favorite fillies?  There are suddenly a bunch of Autobots and Decepticons in Equestria!  And as the dust settles, Rarity and Arcee find themselves teaming up against a hostile Decepticon force…

I wasn’t sure what to expect from this comic, but when the first page features a pony reading a comic book and complaining about the continuity of where the story could take place, I have to admit: I chuckled.  Cut to evil Queen Chrysalis working on her newest evil plan to take over Equestria by opening a portal to another dimension to let other evil changelings through.  That ends up being a portal to Cybertron, where a force of Autobots and Decepticons are battling on the Space Bridge, leading them to pop through to Equestria.  Twilight Sparkle is able to intervene as giant robots plummet from the sky, saving Bumblebee and Optimus Prime, while Chrysalis manages to make an unholy allieance with Megatron himself.  This will end badly.  Elsewhere in Equestria, Starscream crashes to Earth and immediately enslaves ponies to serve as his royal retinue (even replicating his ridiculous crown from ‘Transformers: The Movie’) before getting served by the team of Arcee and Rarity, whose combined abilities pale even against his Seeker minions.

THIS IS AN INSPIRED CONCEPT

Here’s the deal: I picked this up because it seemed like it could be goofy, silly fun, and I was right.  I also thought that traditional comics fans might be likely to mock the very premise, but this is a book aimed squarely at younger readers (and perhaps, fans of their respective cartoons.)  The maguffin that explains the crossover isn’t dwelt upon, it’s just right to the action, and I appreciate that, especially given how clear and how colorful the issue ends up being.  The art styles here are able to merge the Transformers style (albeit one influenced by ‘Transformers: Animated”) with the ‘My Little Pony’ designs remarkably well, and the choice of characters also works, especially the use of Arcee and Windblade, who are both as pastel-colorful as the ponies themselves.  Presumably, each issue will feature smaller team-ups like we see here, reminding me of Gardner Fox’s classic Justice League stories, and I expect that I’m going to want to check out all four issues.

If you can accept Star Trek/Transformers or the Ghostbusters crossover, there’s no reason for you to turn up your nose at My Little Pony/Transformers: Friendship In Disguise #1, as it delivers a fun story, lovely art and coloring and a well-balanced interaction of concepts from both universes into a strong first issue that earns 4 out of 5 stars overall.  We’re at a point in pop culture where literally anything can and will cross over with anything else, so it’s nice to see a book do it well while we wait for the inevitable ‘Tenessee Tuxedo Vs. Aliens’ comic book.