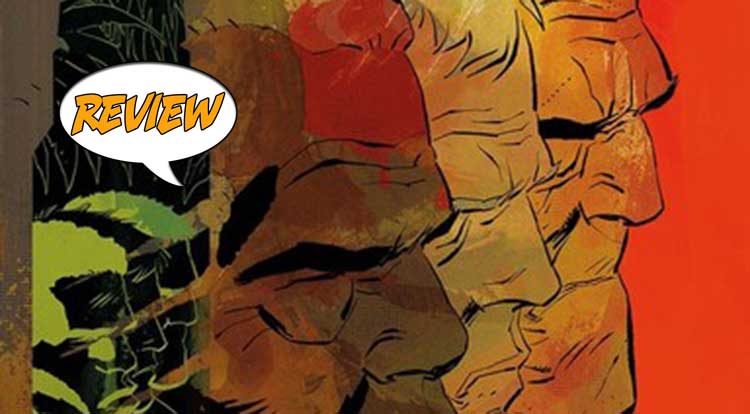 LOST SOLDIERS #1 flashes between the green hell of the Vietnam War and the never ending hell on both sides of the Mexican-American border, told through the eyes  Hawkins and Kowalski, men who saw the worst in ‘69 and saddle up again for some dark CIA action in the present day.  And who is narrating this story, anyway?  Find out in your next mighty Major Spoilers review! Previously in LOST SOLDIERS:  the great American war machine demands sacrifices, especially the ultimate sacrifice made by the men and women of America.  Whether that war is overseas, in Vietnam, or in Korea, or Iraq, or whether it is black ops on the border with Mexico, the war machine demands blood.  Hawkins and Kowalski survived Vietnam, and brought a little bit of that war home with them.  Now, raising 70, they saddle up for another war much closer to home.

Born in war, America eliminated slavery by going to war with itself, supplanted one world power during the Great War, before coming the superpower after the greatest war in history.  Its soldiers and sailors and airmen and pilots are revered for their courage and service and indeed, of all the institutions that make up the fabric of America as a nation, it is the military that is revered the most.

Not all wars are equal though.  On the one hand, Americans who struggle with the way the nation uses its power around the world, console themselves that in the greatest struggle of all, World War Two, there was no doubt who the enemy was.  Vietnam, though, was another matter, and even now, nearly fifty years since America lost in that struggle, the psychic aftershocks are still examined in fiction.  LOST SOLDIERS #1 is one such effort, and it pulls no punches.

Visceral, brutal, cynical and extremely violent, LOST SOLDIERS #1 is narrated by an anonymous voice that positively gloats in the grotesque glory of war.  When it starts proper, the issue begins with two soldiers on patrol in Vietnam comparing notes on who their heroes are – one posits John Wayne, that archetypal American hero, while the other offers up Superman.  It’s a telling point that both men have to refer to fictional heroes (or Wayne’s fictional personas),, seemingly because there are no heroes in their vicinity.  The characters, Hawkins, an African American, and Berg, a Jewish man, are minorities in the big green machine, but those differences are more or less erased when all the men have to rely on each other to survive.  It’s an interesting series of juxtapositions put before the reader, and writer Ales Kot seems to be enjoying himself doing so.

LOST SOLDIERS #1 moves between scenes of utter mayhem in Vietnam, where a patrol engages in a punishing firefight with the enemy, and a more modern day operation.  The CIA (see the notes at the end of the issue) are up to their necks in dealing with Mexican cartels, and rely on mercenaries and ex-soldiers to provide a fig-leaf of deniability.  Older, and much slower, Hawkins and Kowalski (a fellow survivor of that patrol in ‘Nam that went badly wrong) saddle up again, for the money.  They talk of proasic things, like family and prostate exams, but there is an undercurrent through their exchanges.  It’s as if they cannot escape the hold their experiences in Vietnam have on them, a sort of death grip that dragged them back into taking the blood money to eliminate the cartels for the American government.   Indeed, throughout LOST SOLDIERS #1, the narrator positively gloats about the price war extracts from its victims, innocent or not.  The narrator says a line, towards the end of the issue, that will make you stop reading, such is its power.  ‘Do you think I am done with you?’ it asks, not the reader, but the men who were fed to it during the Vietnam War.

Luca Casalanguida has the art duties in LOST SOLDIERS #1 and boy, and like Kot, he doesn’t pull any punches.  This is vigorous, muscular artwork.  There’s no room for nuance, especially when you consider it starts in a field of blood-tinged mud and destruction, before ending with a Sicario-like run to the border by a convoy of armed men with murder in mind.  The loneliness and emptiness of the Vietnam jungle are brought vividly to life, as is the sheer horror of combat as the machinery of war gears up for action, and men are put in front of a fusillade of metal and shredded for the dream of American victory.

LOST SOLDIERS #1 is an issue full of men – it reeks of testosterone, of the camaraderie of combat, and of tough talking men who resort to violence to work out their differences.  The artwork is compelling in the way it gives sense to the world the soldiers find themselves, where violence is the only answer, no matter how punishing or brutal it is.  Casalanguida’s art, in combination with some stellar coloring, is the stand out element of LOST SOLDIERS #1 and one that should bring many eyeballs to this excellent opening issue.

War and America are inextricably linked.  The price of greatness comes at the cost of the lives of the men and women who volunteer to serve.  It goes without saying that those lives have been spent wisely in some instances, and badly in others.  LOST SOLDIERS #1 is the opening salvo in a series that seems to be saying that wisely spent or not, the lives of those touched by war never escape the damage it wreaks on them.

A bold opening to a mini-series that seems to have a lot to say about the effects of war on those who participate in it, and how war seems to be the solution to problems that the authorities find the easiest to deploy. LOST SOLDIERS #1 is one of the strongest opening issues to a series I’ve read all year, and while it won’t be for some, it never glories in the violence, instead putting it in its proper context.
Aditya Bidikar Ales Kot Heather Marie Lawrence Moore Image Comics Lost Soldiers Luca Casalanguida Review
Share. Twitter Facebook Google+ Pinterest LinkedIn Tumblr Email
Previous ArticleCut-Man #2 Review
Next Article Wayne’s Comics Podcast #445: Interview with Todd Kelley