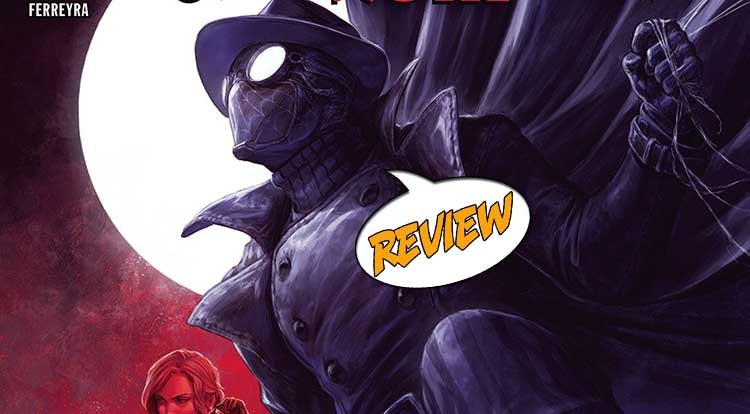 It all started with a murder in New York City. Now, in the heart of Berlin in 1939, Peter Parker comes face to face with a nemesis to be reckoned with! Find out in Spider-Man Noir #2 from Marvel! Previously in Spider-Man Noir: Peter Parker is The Spider-Man in New York City, 1939. As a masked vigilante, he protects people against the mobsters and other such criminals. One fateful night, a waitress from The Black Cat nightclub winds up dead, with a mysterious cicada gemstone clutched in her hand. Investigating this, Peter finds his way to a museum curator, Huma, who is also the dead girl’s sister. Before he knows it, he is off across the ocean on more of an adventure than he bargained for!

THE STONE THAT LED AROUND THE WORLD

I love how Spider-Man Noir #2 opens with a panel showing the plane and the red dotted line of its travel route to London. Peter Parker’s inner dialogue as he’s pondering Huma is pure noir. But maybe he’s trying to distract himself – for being a web-slinger, he doesn’t have the stomach for flying. To be fair, the flight was pretty rough. The dialogue is pithy and has a wonderful patter to it. When Peter describes his fear of the plane crashing as feeling like a dead pigeon in a tin cage, it earns him the nickname of Pidgey.

Huma takes him to the Savoy – pretty rich for Peter’s blood. The museum has sprung for it. Huma is perfectly comfortable rubbing elbows with the rich. She’s also pretty firm at explaining that she’s taking the bedroom in their oh-so-elegant suite. Huma’s been busy all around – she managed to get them an invitation to an Embassy party that very night. She, naturally, packed an evening dress for the occasion, but Peter doesn’t have a white jacket for the affair. Once they get in, he isn’t shy about nabbing one from someone too inebriated to pay attention.

As they split up to find the Ambassador, some thugs are casing the joint from the outside, looking for the stone. Huma heads upstairs without telling Peter, but his spider-sense gives him the alert, so he follows, finding her talking with (apparently) the Brazilian Ambassador and his wife. Huma wants their help to get into Germany so she can talk with a museum curator there. But when they reveal the cicada stone, the thugs (who have been watching for it) see it and attack! After some fisticuffs, they get away with the stone, lead Peter on a crazy chase across London – and vanish.

In the true spirit of a 1930’s adventure story, Huma and Peter get back on the road, now boarding a ship to Sicily. A roadster is waiting for them, and they make their way to an airport where they were instructed to ask for “Harry.” Their pilot turns out to be the Ambassador’s daughter, which is cool. Their take-off is menaced by guys with machine guns, but they make it to Berlin. It is night. They sneak into the museum and find the curator they’ve been looking for, dead. And suddenly there is a bright, strobe-like like what Peter had seen outside Aunt May’s house…

THE PLAY OF LIGHT AND SHADOW

I really like the art style in Spider-Man Noir #2. For a story like this, it should be distinctive and should add to the flavor, and it does this in spades. It isn’t exactly black and white, but most of the color is toned down considerably so it feels like watching an old movie. In the classic film tradition, it also plays a lot with light, shadow, and silhouette, which I love. To add an extra punch though, accent colors, particularly red, are used carefully with certain elements leading our eyes across the page. Peter’s Spider-Sense is also red, and against the muted backdrops, it stands out.

To top it all off, the book is full of breathtaking scenes. The final pages in Berlin are jaw-dropping. The Brandenburg Gate under the stars with red Nazi flags snapping in the breeze is dramatic and chilling. At the entrance to the museum, it is dark except for the almost spotlight effect of the streetlights. And then there’s a panel where Peter and Huma are going down the grand staircase in the museum. You can almost hear their footsteps echoing in this grand space. It sent chills down my spine.

The creative team on Spider-Man Noir #2 give us a brilliant and fascinating take on the old web-slinger. This Peter Parker is no kid, but he is new to being a world traveler. It’s like Spider-Man meets Indiana Jones, but through a darker lens, and it is wonderful.