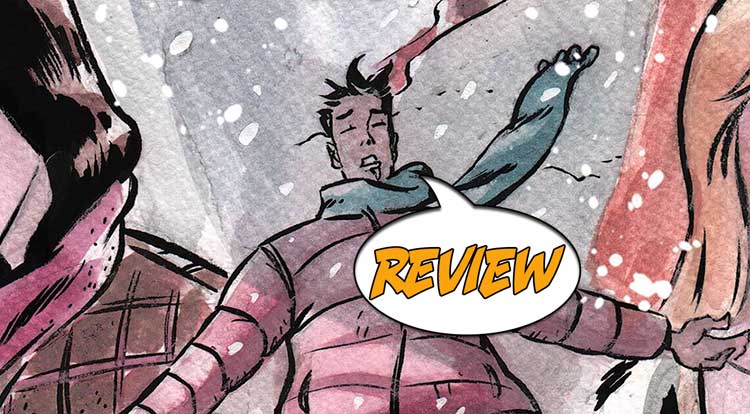 Hank Kelly can’t die, unfortunately for him, that means he’s stuck with his life.  Your Major Spoilers review of Cut-Man #2 from Action Lab Entertainment, awaits! Previously in Cut-Man: Hank Kelly, the Immortal Man, must adjust to his new life in the public eye. With his family broken apart, Hank seeks to use his newfound fame to put it back together.

Cut-Man #2 opens up with a bit of a recap showing that Hank Kelly was hit by a truck, but miraculously healed completely with no lasting injury.  Elsewhere, Rosalind is recapping that at the same time Hank was hit by a truck, her husband exploded.  In the present Hank is visited in the hospital by his ex.  They quickly begin fighting as it’s clear that she still isn’t ready to let Hank see his daughter.  Afterwards Hank demands to be released from the hospital.  On the outside as he tries to avoid the crowds gathered to worship him he’s spotted by a television producer who wants to make a show with Hank repeatedly killing himself.  Hank refuses and heads home.  While home he sees the same producer doing an interview on TV where he calls Hank a liar, which sets him off.  Hank heads out encounters a mugging, things then go south from there.

While the first issue did a fine job introducing the premise, Cut-Man #2 goes on to elaborate and set a tone for the series.  It accomplishes this by really pushing the fact that Hank is just not a really likeable guy.  Sure, he may be a father who wants to see his daughter, but the ways he goes about making that happen are ill-advised at best, while his penchant for drinking heavily doesn’t help his case much.  There’s also a capacity for violence shown at the end that makes me think that Hank’s abusive nature won’t always be directed towards himself. Essentially, while his actions in the first issue can be passed off as “having a bad day”, this issue shows that these issues are deeper and now he has a superpower.  The one portion of this comic that isn’t working quite yet is Rosalind’s portion of the story.  With her being a police officer it seems like there should be a bit of a mystery for her to unravel, but she’s already dead set on Hank being the cause of her husband’s death, so how they’re going to interact is still up in the air.  Also, the blue, white, black, and yellow color scheme is still working here and continues to make this a visually striking comic.

The Bottom Line:  So Far, So Good

Cut-Man #2 does exactly what a #2 needs to do.  It took the seeds from the first issue and nurtured them with subtle character development to polish up the players before really pushing them deep into a lot of action or plot. While not a lot happens in this issue, there’s a much better sense of who Hank is, who Rosalind is, even who Laurel is.  It’s Hank’s character development in particular that reveals this series to be more psychological than it originally came off, in a good way. 4 out of 5 stars